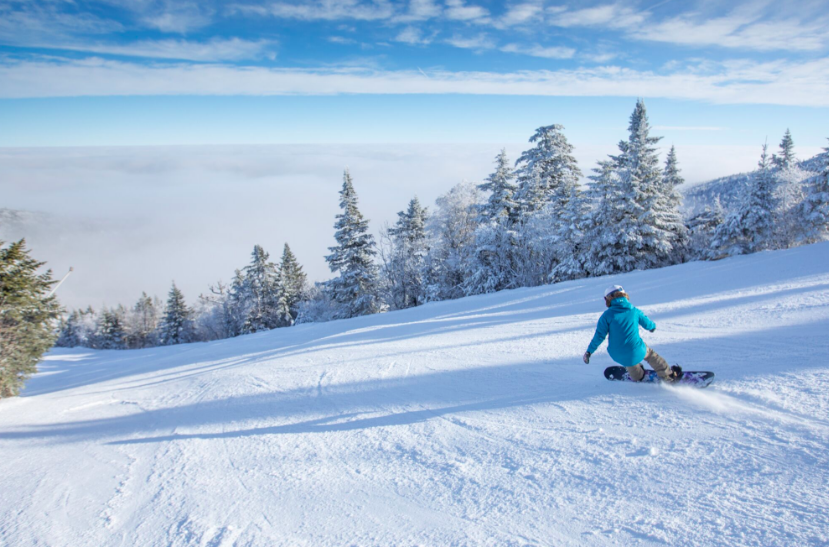 You can experience easier terrain for all levels, including runs up to seven miles long. (Chandler Burgess)
Travel

Killington, Vermont: ‘A Baby Whistler on the East Coast’

It offers a perfect balance of adventure and going at your own speed
BY J.H. White TIMEFebruary 24, 2019 PRINT

KILLINGTON, Vt.—Killington is a great place to get lost. I’m a fairly new skier, and feel comfortable skiing down greens and blues, with an occasional black diamond too. I’ve never had so much fun exploring a mountain.

“With five or so terrain parks, mogul skiing, it’s like a baby Whistler on the East Coast—you don’t get bored here,” said Chris Montag, a “ski academy kid,” who’s lived everywhere, including Aspen for eight years. His dad was a ski coach. Montag still skis over 100 days a year at Killington; Skypeak and Bear are his favorite mountain passes since the sun hits that side all day long, keeping the snow fluffy.

With 155 trails, Killington boasts the nickname “The Beast,” with blacks and double blacks that satisfy experienced racers like Montag. You can also experience easier terrain for all levels, including runs up to seven miles long. It’s up to you if you want to gas your legs in one run, like I did a couple times, or take breaks along the way.

Part of the enjoyment for me was how safe everything felt. Most of the chairlifts have a dual mechanism that transitions to a super slow gear when picking you up. Then, once you’re on, you smoothly transition to the fast gear to get you up the slope quickly. This is a far better experience than getting whacked in the back of the legs as the chair lift whisks you away.

I also enjoyed the freedom of not having, or needing, a plan. I just went up the lift and chose a route once I got to the top. I never felt overwhelmed or cornered with only terrain above my skill level, as I was always able to find easier options down the hill. For a beginner-intermediate skier like me, it made my exploration that much more comfortable and carefree.

When it’s time to meet your friends or family, and you’re on the opposite side of the mountain, there’s always a trail map at the top of each lift to help you navigate back to a meeting spot. More often than not, too, there were guides at the top of the chairlifts to tell you where to go.

Killington also has an RFID system that expediently reads your reloadable lift ticket card as you ski through security gates. It’s so much easier than having someone stand and try to point a laser gun at your card somewhere dangling from your jacket. I didn’t have to wait in a single line my entire three-day trip.

Having all these well-thought-out measures in place gave me the exhilarating feeling that I was a pioneer of sorts and could explore the mountain at my own pace, but meanwhile be safe and secure in my wanderings.

I was there with two friends—snowboarders—and we would often start out together, then either lose each other or split up at some point. There was so much flexibility, and it was so easy to navigate the mountain; Killington offered that perfect balance of adventure and going at your own speed.

When you think of an artisanal experience, you may think of something bespoke, tailored just for you, and delivered by masters of craft.

At the heart of craftsmanship is the desire to share one’s expertise with the world. Killington is filled with these craftsmen—professionals who know skiing and snowboarding better than I know walking. It’s a culture of knowledge, passion, and enjoyment, that welcomes all levels of downhill enthusiasts, from the beginner to the expert.

Chris Montag is the ultimate craftsman. He isn’t just a former ski racer, he’s the resident boot expert at Potter Brothers, at the Snowshed Lodge, in the “Learn to Ski” area.

“The foundation of the sport is the boot. You can’t downgrade it. It has to be the most important thing,” Montag said. He’s been working on boots professionally for 30 years, since he trained at his dad’s shop while growing up.

“You gotta be a lifer to know what’s up,” he said of his ski and snowboard boot expertise. True boot fitters have decades of experience solving the most aggravating sore spots. “We’re all doctors … applying the same ideologies and methods because they’re time-tested.”

When I went to see Montag at Potter Brothers, my feet often throbbed and the ankle bones were tender, with almost a dull, bruised sensation. Montag measured me up and told me that the boots I had been skiing in for the past year, which were sold to me by someone who claimed to be a “boot expert,” were, in fact, one size too big.

“The big boot could be super problematic in so many ways,” he said. “One thing about boot fitting too, we don’t get paid commission here, thank God. I’d never lie to anybody. It’s straight shooter stuff. There’s no value in ever lying, anywhere, but [especially] here.”

He fitted me in a new pair of ski boots, then heat molded them, which formed both the outer hard plastic and inner lining.

“Instead of waiting 25 days to break it in yourself, we break it in here,” he said. Even despite my tender ankles, the new boots felt instantly better, and properly fitted—snug, but not too tight. (Later, when skiing in them, my feet didn’t throb and felt effortlessly secure.)

Montag emphasized you have to start with the feet, and if you don’t fit your feet properly at first, people are “going to ski in misery a couple times, and that’s it, throw the boot away, be done with it … You might have a terrible experience and never enjoy skiing.”

First, buy a proper pair of ski socks, then go get fitted at a boot shop where the fitter has many years of experience. Then if alterations need to be made, they can be done properly. Montag said many casual skiers and snowboarders aren’t even aware that boots can be tweaked and improved with grindings, expansions, heat, and pads.

My snowboarding friend was having trouble with one of his boots, one of which was looser, making it harder to control his board. He was also ripping the inside liner to shreds. Montag measured his feet and found one foot was longer than the other, a common problem. Montag cut a simple “mustache” pad to create a new pocket to wrap around his ankles. My friend slipped on his boot and said, “Definitely, it’s better.”

Montag isn’t the only artisan at Potter Brothers. John Hobbs, the manager, gave my skis a full tune-up, creating a wooden grain-like pattern on the bottom to wick away moisture.

Hobbs said, “As we’re skiing, we melt a layer of snow underneath us,” which happens in fractions of a second. “As the snow moves through the ski, you’re getting more and more water, so you want it to shed out.”

Most of what he told me I had heard before, either from friends, other instructors, or from YouTube. But what set Steven apart was his progression drills. He was like a kung fu or jiujitsu instructor, breaking down one technique into tiny, manageable steps.

The most basic thing any skier has probably heard is put pressure forward on your shins. That’s great to hear, but until Steven taught me a “patience turn,” I didn’t fully grasp the concept of shin pressure. I realized I was often sitting back further than I should be. To do a patience turn, go on relatively flat ground, reach forward with extended arms until gravity takes you forward. Doing this, the muscles relax, and it feels like your bones are just following gravity down the hill.

B.E.R.P. has also been hard to forget, purposefully so. It’s an acronym for Balance, Edging (tilting the skis), Rotary (steering the skis as the leg rotates in the hip socket), and Pressure (forward on the shins).

At the end of the lesson, Steven taught me 360 turns, where you’re spinning in circles down the mountain, a drill that integrates the B.E.R.P. The key is as you start to go backward, you shift your weight to the inner leg, which then becomes the outer leg. I had tried these before, and that slight weight adjustment made them surprisingly easy to do. A two-hour lesson gave me a great deal of basic, fundamental techniques I can practice anytime on my own.

After hitting the trails hard, Preston’s at the Grand Summit Hotel was the perfect way to end the day. The atmosphere was light and friendly, and the food under executive chef Greg Lang’s direction was great.

The brie and artisanal bread appetizer just melted in my mouth, with a perfect balance of salty and sweet. My main course was sausage-filled calamari, something I’d never had before, but was as deliciously memorable as the plates before it.

That seemed to be a theme at Killington—to experience something new, and be satisfied far beyond any expectations. The resort’s winter artisans only left me with one unanswered question—when I can return to go exploring again.

He was a guest of Killington Ski Resort.