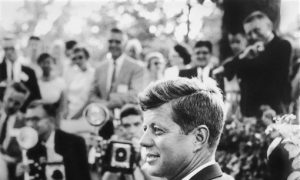 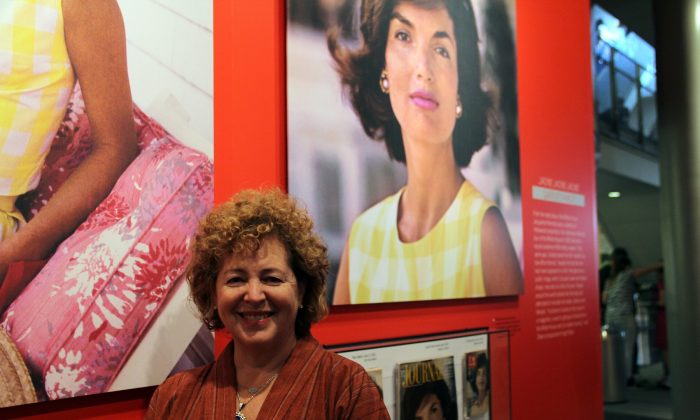 Penny Bergman at Creating Camelot an exhibition of intimate images of President John F. Kennedy and his family, which opened at the Newseum in Washington, D.C., April 12, 2013. (Shar Adams)
Arts & Culture

WASHINGTON—Television and theater director Penny Bergman is gazing at the rare and intimate family photos of President John F. Kennedy and first lady Jacqueline, and she chokes with emotion.

“I grew up in the Kennedy years, I am one of Kennedy’s children,” she says proudly.

“Creating Camelot,” an exhibition of public and private photos taken by Kennedy’s personal photographer, Jacques Lowe, just opened at the Newseum in Washington, D.C., commemorating the 50th year since JFK was assassinated. Bergman is traversing the emotional terrain of the past with a consciousness of the present.

“This is all my Camelot years—three years, four years of the bright and shining moment—and to have come of age during that time,” she said, her voice faltering as she noticed an enthusiastic group of high school students. “I am watching all these kids walking around now thinking, ‘They are my age.’”

Reflecting on the similarities between America’s 35th president and the 44th, Barack Obama, Bergman said, “Interesting, it is being echoed in contemporary times with the Obamas.”

The Kennedys, too, were supportive of the arts and culture, opening up the White House to artists, for tours, musical performances, and creative events, as the Obamas have done.

Kennedy similarly faced complex geopolitical and economic times, seeking initiatives to support social programs as he battled a recession. He developed the New Frontier program, to look for ways to raise funds for education, medical care for the elderly, and economic aid to rural regions.

Bergman said that kind of thinking generated a pride in being American, based on giving rather than dominating, as she believed earlier leaders had done.

She remembers two things as being essential to that time in history: The civil rights movement, which led to “a righting of the wrongs,” and the Peace Corps. Both were standout initiatives of the Kennedy era that developed as a result of the different, more altruistic thinking, in her opinion.

“America, instead of being a heavy and militaristic force, was coming out with ways of helping developing nations around the world,” she said.

In conjunction with Creating Camelot, the Newseum is screening a video of the Kennedy era titled “A Thousand Days” and a second exhibition. In a chilling display, “Three shots were fired” uses images, video footage, news reports, and never before displayed artifacts to bring to life Nov. 21, 1963, the day that JFK was assassinated.

Bergman was only 16 when the news broke but she recalls the moment vividly, tears welling as she attempted to put emotion into words.

“It was unintelligible,” she said, struggling to speak. “I was in a biology class … a sophomore … school was dismissed, we went home and then we were glued to the news.”

Life changed dramatically after that, she recalled.

Bergman, artistic director for New York-based Luna Productions, was also stage manager for the iconic, recently ended television soap “All My Children,” which, she said, is just about to go digital.

The Kennedys, with their progressive ideas and support for the arts, remain an inspiration, she said, noting her own artistic pursuits. “It shows, leadership affects all of us.”