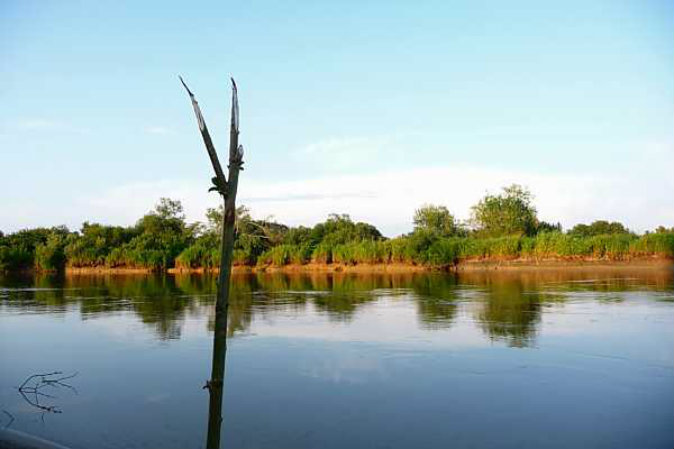 It’s raining pretty hard now and the kayak is filling with water and my improvised bilge pump – a plastic bag – has a hole in it. I’m very slowly sinking, and for the past three hours the only solid land I’ve seen is the 4 foot vertical wall of peat along the river which occasionally takes the place of the wall of reeds.

I’m sitting in a bright green inflatable kayak somewhere along the Emajõgi in Estonia. Emajõgi literally translates as “Mother River”, and the great Mother meanders slowly eastwards through the southern half of the country. Flowing from Lake Võrtsjärv to Lake Peipus, the Emajõgi passes through Tartu, the 1600 year-old cultural and intellectual capital of Estonia.

I’m here as part of an experiment. A year ago, Wade Shepard, editor of Vagabond Journey, mentioned that the combination of an inflatable kayak and a folding bicycle may be the ultimate vagabond setup. I have decided to see what an inflatable was capable of by paddling the 62 mile (100km) length of the Emajõgi. Plenty of people have made long journeys with folding bicycles, but inflatable kayaks are still primarily used for short afternoon pleasure paddles rather than for multi-day expeditions.

The Emajõgi is a slow, flat river – perfect for testing out a method of water transit that is only a few steps above a pool toy. The area is absolutely stunning if you enjoy broad, flat swaths of land, and if you’re not viewing it from the eye-level of a bedside table. I’ve been staring at reeds and peat for hours, with little else coming into view, and the low seating of a kayak means that little else can come into view. At the moment, with my pelvis completely submerged in cold water and no clue how far I’ve traveled or when I’ll find a dry spot to get out, it’s not exactly picturesque. I guess that’s what I get for ignoring local advice: “You’re going to kayak the length of the Emajõgi? That’s stupid. You’ll be staring at walls of dirt or walls of reeds the entire time. Also, it’s extremely slow. It’s monotonous.”

Thinking myself at least semi-knowledgeable about other people’s worldviews, I see the discouraging remarks as reflections of the moderate pessimism that can be found in many cultures too far from the equator. Try to maintain a happy-bubbly outlook on life after living in a place famous for long, dark winters. Some individuals will keep the pep in their step, surely. But as a culture? Good luck. There’s a reason that the best vodka and the highest suicide rates are found in the coldest countries — Estonia, unsurprisingly, has very good vodka. Being from America, though, the land of peach trees and backyard grill parties, I’m an optimist. I expect to see much more than peat and reeds. In spite of local advice, I’m making this journey.

Still, if the rain doesn’t slow down and I don’t find a nice piece of solid land soon, I’m going to be paddling the rest of the day in an inflatable kayak that’s cruising just beneath the waterline. Attempts at bailing have been ineffective as the plastic bag’s hole is expanding with every use. [Travel Tip #5738: Always carry a plastic bag. Preferably without holes.]

The reeds along the river would be fine for a temporary landing, had they formed some sort of above-water root system. To the extent that I can see between the reeds, they seem to plunge at least thigh-length into the bog. That’s of no use to me; nowhere to stand. There is no low riverbank in sight. The peat walls are no good either. Inflatable kayaks are a bit soft and squishy, and I can’t reach the top of the wall from a sitting position. Kneeling or standing causes the kayak to trampoline downwards in accordance with Newton’s third law.

Therefore, raising myself for a go at the top of the wall will result in my head suddenly returning to its prior altitude, while my torso and now bent-double kayak will be mysteriously submerged. Furthermore, in accordance with Newton’s fourth law, if two objects traveling at the same speed fall in same river simultaneously, the object that is being pursued will accelerate more quickly than the object which is giving pursuit. Hence, my backpack, food and camping gear will float away more rapidly than I can swim, returning them to their rightful place in the cosmos. By my estimate this will be someplace within our solar system – most likely at the bottom of Lake Peipus along the Russian border.

Copyright © 2015 by Vagabond Journey Travel. This article was written by Tristan Hicks and originally published on www.vagabondjourney.com.