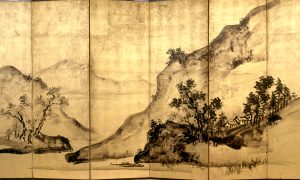 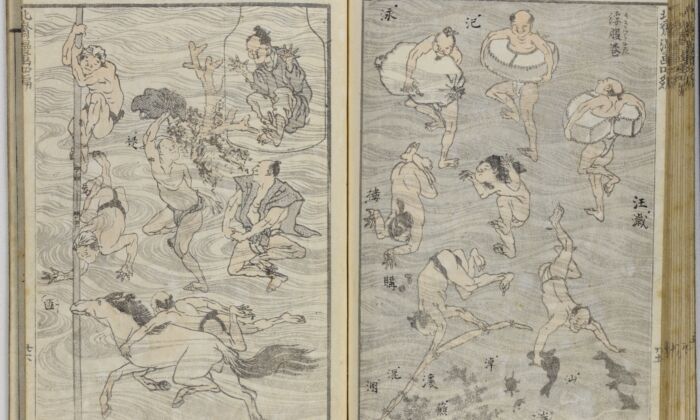 The exhibition 'Hokusai: Mad About Painting' at the Smithsonian
By Lorraine Ferrier
biggersmaller
Print

Japanese artist Katsushika Hokusai created an astounding number of marvelous works, many of which were prints. He began his illustrious career as a printmaker, but in his 30s he started to paint, eventually leaving printmaking behind in his late 60s and early 70s in order to concentrate on his painting.

The yearlong exhibition had opened in November 2019 to commemorate the centenary of Freer’s death. The exhibition will be one of the first shows that visitors will be able to see when the museum reopens, the date of which is yet to be announced.

The Japan Foundation assistant curator of Japanese art, Frank Feltens, curated the exhibition. He talks about Hokusai’s printmaking, in a phone interview, allowing us a glimpse into a few of the artist’s printed works.

The Epoch Times: Hokusai completed a traditional Japanese printmaking apprenticeship. Did traditional apprenticeships end in the Edo period (1603–1867)?
Frank Feltens: The traditional printing industry consisted of a very clear-cut division of labor. A print designer would create the print design and then that design would be transferred by a carver onto the woodblock. Those woodblocks would then be passed onto a printer to print. The eventual object would then be sold by one of the publishers who ran the print shops in Edo.

This kind of division of labor basically collapsed with Japan’s modernization in the late 19th century. There are still people specializing in this noble, ancient craft but not as many, of course, far fewer than in the Edo period when it was a huge business and a huge way of disseminating information.

The Epoch Times: You have some rare preparatory woodblock designs by Hokusai in the exhibition. Please tell us why they are rare.
Mr. Feltens: We have a pretty significant collection of the preparatory drawings for the “Hyakunin isshu uba ge etoki” (“One Hundred Poets, One Poem Each as Explained by the Wet Nurse”) prints. This is a late Edo-period interpretation of the classical anthology “One Hundred Poets, One Poem Each” [by 12th-century poet Fujiwara no Teika]. All of these drawings belong to one series that Hokusai made in his last years of printmaking. They are a rarity to have particularly because usually these drawings would be lost in the process of creating the print. Oftentimes these drawings, which were made by the artists themselves, would be pasted directly on the key block (the woodblock in the production process that creates the outlines in the entire print). In order to be able to be as precise as possible, the carver would carve directly through that drawing.

The Epoch Times: In the exhibition, there’s what looks like an instruction manual with illustrations of dance moves.
Mr. Feltens: Hokusai was asked by a publisher to create illustrations for a manual on how to dance, so the title of this book basically means “Teaching Yourself How to Dance.” It’s actually one of my favorites. You can just use that book at home and start dancing. You get all the moves that were popular at the time, so once you were out on the street, you could show them off.

The Epoch Times: In the exhibition, you have some printed books called “Hokusai Manga.” From my understanding, Hokusai’s manga is different from how we think of manga now.
Mr. Feltens: That’s right. Now manga can be anything from comic books to social commentary, both for children and adults in equal measure. In Hokusai’s time, the term “manga” meant something like doodling or jotting, so it signifies something made impromptu.

The term “Hokusai Manga” is actually a series of books that were produced on the basis of Hokusai’s drawings, starting when he was alive in 1814. These books proved so popular that they kept being republished with different images scavenged from the leftovers of Hokusai’s atelier after he had long passed away.

The incentive of creating the first volume of books on manga was actually to disseminate knowledge of Hokusai’s style among a broad readership. In other words, he wanted to encourage people to copy him, to paint like him, in order to increase his fame.

I think he wanted to both encourage people to paint like him but also to paint or pay attention to art in the first place.

To find out more about the “Hokusai: Mad About Painting” exhibition at the Smithsonian National Museum of Art, including the reopening date, visit Asia.si.edu