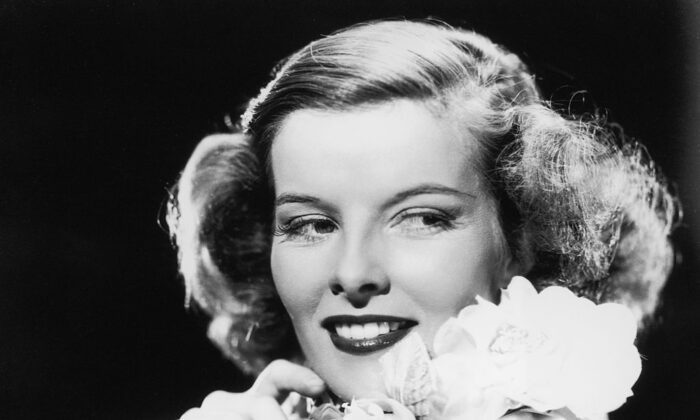 Katharine Hepburn, circa 1945, portrayed glamorous women in the films that first made her famous. (Hulton Archive/Getty Images)
Film Reviews

Katharine Hepburn in ‘Woman of the Year’ and ‘Adam’s Rib’: Femininity Over Feminism

Katharine Hepburn is remembered as a feminist icon because of her liberal views on gender equality and the strong roles she played in movies. However, her personal ideology was rarely reflected in the Golden Era movies she made. If you actually watch her movies from the 1930s to the ’50s, you’ll find that most of the stories don’t promote feminist messages. In fact, while she often played very strong women, most of Hepburn’s characters show us through their experiences that being an independent career woman is no substitute for being traditionally feminine.

Few of her films depict this message more clearly than her movies with Spencer Tracy. These two great actors, both Academy Award winners, made nine movies together over the course of 25 years. In these films, they usually played characters who were married or who planned to get married.

Many of Hepburn’s collaborations with Tracy show that women have little to gain by winning the battle of the sexes. This started with their first movie together, “Woman of the Year” (1942). The theme was most notably repeated in “Adam’s Rib” (1949). Both movies focus on a married couple whose relationship is threatened by professional competition.

In “Woman of the Year,” Tess Harding (Hepburn) is a woman about town and international columnist. Sam Craig (Tracy) is a down-to-earth sportswriter. They have nothing in common besides working for the same New York newspaper. When these two writers battle in their respective columns over the value of sports during wartime, their editor (Reginald Owen) brings them together for a truce. They feel immediate chemistry with each other, and Sam invites Tess to her first baseball game.

Getting to know each other, they don’t find much in common except an overwhelming attraction. After just two dates, they decide to get married. However, as they struggle to squeeze the wedding into Tess’s hectic schedule, Sam wonders if this is an example of how their married life will be.

In “Adam’s Rib,” Adam (Tracy) and Amanda Bonner (Hepburn) are married lawyers. Adam is an assistant district attorney, while Amanda is a private lawyer. They seem to have a happy Manhattan marriage until a controversial news item starts an argument.

The spouses argue about the most sensational case of the day. Doris Attinger (Judy Holliday), a young wife and mother, shot her husband, Warren (Tom Ewell), when she found him in another woman’s apartment. While Adam believes that no one is entitled to break the law, Amanda argues that Doris was defending her marriage, as any man would defend his home. The issue goes from a casual disagreement to a full-fledged battle when Adam is assigned the case. Eager for Doris to receive justice, Amanda decides to represent her. As Adam and Amanda go head-to-head in court, their marriage is on trial as much as the Attingers’.

From this point on, the movies progress similarly. Each wife wins a great victory, but she goes too far. Then, her husband leaves her. At that point, she realizes that all her professional success is empty without the man she loves.

You could almost consider “Adam’s Rib” a continuation of “Woman of the Year.” If Tess and Sam didn’t solve their problems early on in their marriage, they undoubtedly would have come to a similar juncture as Amanda and Adam face, although in different professions.

Career Women With a Cause

Both Tess Harding and Amanda Bonner are more than career women. They are proud, outspoken feminists. Tess Harding’s beloved aunt and mother figure, Ellen (Fay Bainter), was a leader in the women’s suffrage movement; Tess obviously idolizes her.

Early in the film, we see Tess speaking at a women’s emancipation meeting about ladies’ chances to prove themselves during the war. When Sam asks her to marry him, she admits that she never thought she would marry because she hates to be tied down.

Once they are married, it becomes obvious that Tess doesn’t plan on changing her life to accommodate Sam. He moves into her apartment, which is flooded with European dignitaries on their wedding night. Time for each other is sandwiched between her international events. She can’t cook. She shows little genuine interest in her husband’s work.

At the beginning of “Adam’s Rib,” the Bonners seem to have a happy marriage. Having been married for several years, they have found time and ways to be together despite their careers. Adam respects his wife’s career, and vice versa.

The trouble starts with the Attinger case. Adam tries to get out of prosecuting Doris Attinger, knowing his wife’s feelings on the matter, but Amanda blames him personally for Doris’s supposed legal mistreatment as a woman. Adam dreads the publicity which will come from the fact that the legal opponents are married, yet Amanda happily uses it as her main tool toward victory.

Amanda asks possible jurors, “Do you believe in equal rights for women?” She states that her whole case “is based on the proposition that persons of the female sex should be dealt with before the law as the equals of persons of the male sex.” This court case is a perfect example of someone capitalizing on a single situation to elaborately prove a point. To prove that Doris Attinger was justified in nonfatally shooting her husband, Amanda probes into the Attingers’ marriage, brings in a series of unrelated women from a gymnast to a chemist, and even asks the jurors to imagine Mr. Attinger as a very homely woman! Ultimately, her most powerful weapon is her knowledge of Adam, which she uses to make him so flustered and angry that he wins the case for her.

While proponents of femininity seem to embrace the differences between men and women, feminists often try to erase them in their quest for equality. However, the leading ladies in these movies certainly don’t look unfeminine. On the contrary, they are very womanly, which makes them far more powerful. Both Tess and Amanda wear glamorous clothes and hats, feminine hairdos, and the delicate makeup that characterized female fashion in the 1940s. Tess sports one rather boyish pant outfit around the house, but her hairstyle and pretty face declare her fully female.

These outward appearances are merely the icing on the feminine power that these women have. While shunning the softer virtues long attributed to the fair sex, the career women in these movies use womanly wiles to manipulate men. They deny gender characteristics in terms of gifts or duties, yet they still use their feminine charms to their advantage. Whenever Sam is frustrated by Tess’s selfish behavior, she gazes at him flirtatiously; a few kisses quickly melt his anger.

Amanda similarly uses affection to cool her husband’s displeasure. These women’s whole lives are contradictions, since they enjoy the advantages of femininity while demanding the rights of equality. Yet, when Adam objects to Amanda’s using “sly and feminine hints” in court, she refuses to concede until the word “feminine” is struck from the record.

Tess wins her accolades, speaks to international leaders, and calls the president by name. Amanda wins the case, proving her point and gaining acclaim in the papers. However, the laugh is on each of the women when she loses her husband in her pursuit of equality.

In essence, these two films show that feminism cripples women, leading them to selfishness and dishonesty. Tess, for example, is a self-absorbed human being. It’s not even a matter of being a good wife but of just being a human with the barest consideration for another person, made more poignant because the person she ignores is a loved one. Amanda basically cheats her way to winning the court case, using cruel feminine tricks to unnerve Sam. These characters lack basic decency and kindness; that is, instead of gaining self-worth, they lose what makes humans worthy.

Tess understands this truth only when her aunt explains how she, at long last, is finding true happiness by marrying Tess’s father (Minor Watson). “You can’t live alone in this world, Tess. It’s no good. Success is no fun unless you share it with someone. I’m tired of winning prizes. They’re cold comfort. This time I want to be the prize myself!”

These two movies show that traditional femininity and marriage bring more happiness than fighting female nature ever can. Ultimately, these two characters that Katharine Hepburn plays learn that it’s better to be a man’s helpmate than his competitor and focus on the wonderful differences between men and women. As Adam Bonner says, “Vive la difference!” or “Hooray for that little difference!”