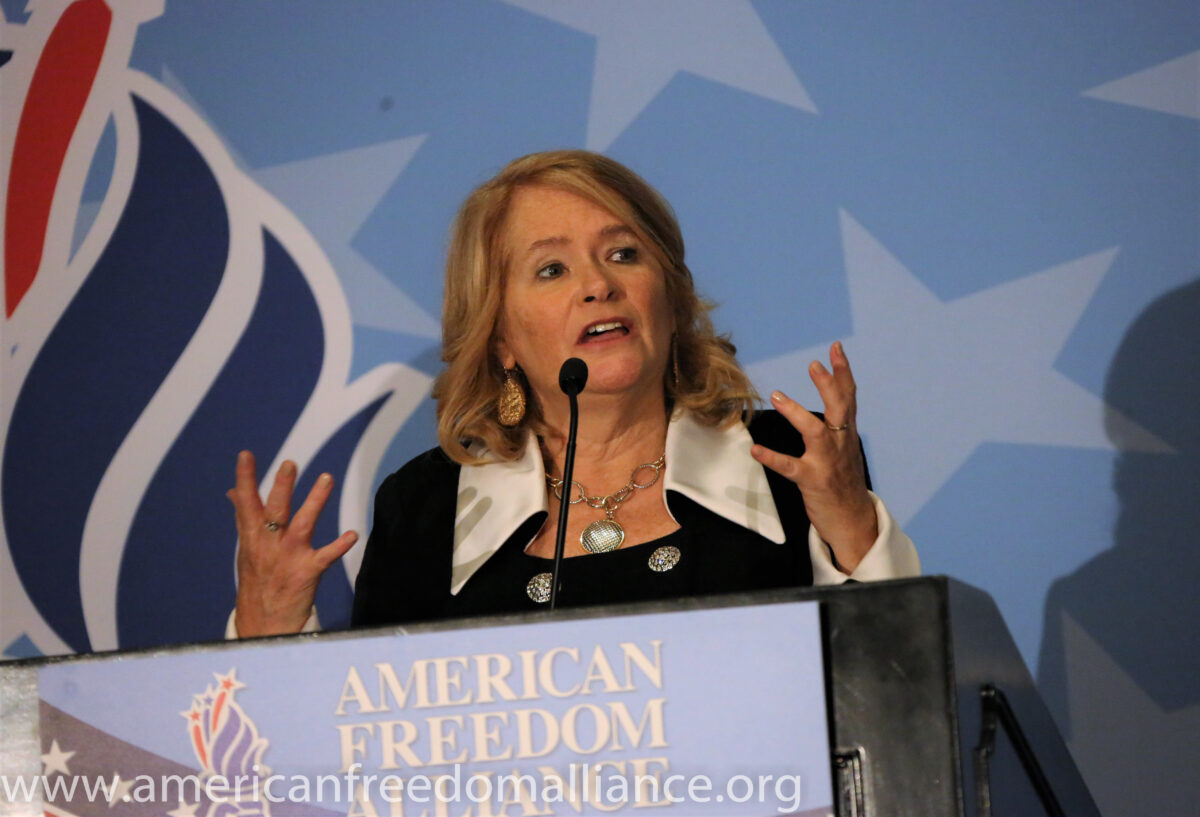 Karen Siegemund on the Fight to Preserve American Culture

Karen Siegemund has experienced her share of political activism, from her movement to “Rage Against the Media” and its biased or untruthful reporting, to serving as president of the American Freedom Alliance (AFA), to becoming a national story overnight when she received a letter saying her teaching contract wouldn’t be renewed because of her remarks in defense of Western civilization.

She certainly seemed primed for a political life, with a father who grew up in Hitler’s Berlin, and having worked with the Navy during the Cold War.

But Siegemund, initially a scientist, says her fight has never been a political one, but a cultural one.

“Standing in defense of Western civilization—how shocking that that’s a partisan issue. But it is. This is the one that shocks me more than anything,” said Siegemund, who heads AFA from Southern California, where she is based. “With AFA, we’re not a political organization but everything we do does relate to the culture.”

It actually all started when she first realized what children today are reading.

“It was indoctrination, pure and simple,” she said.

Following the end of the Cold War, Siegemund traded developing sonar systems for continuing studies. She wanted to study international relations to delve into history and war and diplomacy so she could understand how that had all happened.

And then she had a dream.

“I literally had a dream where I was back at my old school,” Siegemund said. She was teaching an evening seminar that helped the students put together all of the lessons from different subjects they had learned about during the day. She woke up and realized she wanted to do just that, and reached out to many schools in her area with a list of the wide range of subjects she could teach.

“I got a call the next day and became a math teacher; math and Latin were the first two things,” Siegemund said.

“What I wanted to do was broaden the world for kids,” she said. “After 20 years as a scientist, teaching is a completely different thing, but I loved it so much—it was making the world bigger for kids.”

Whether she was teaching math, Latin, French, or science, she would apply the lessons to real-world cases, put things in historical context, and make connections across subjects.

But early on, Siegemund noticed there was something missing in schools.

Eighth-graders at the middle school where Siegemund taught would put together a presentation to give before the whole school every year, and it was a wonderful project in concept.

But one presentation stood out.

“One little boy, he stood up there, he had a beautiful PowerPoint—and everything he said was wrong,” Siegemund said. “He stood up there and spoke very well, but factually was completely incorrect.

“So I talked to the head of the school and said, ‘You know he just stood up there and told a hundred kids a whole bunch of stuff that’s wrong, so now it’s not only he who did this wrong thing, but he’s presented this to a hundred kids who now know this wrong stuff as fact,'” Siegemund said.

“And her response to me was: ‘Yes, but did you see how great his PowerPoint was? I’m sure he was so proud of how he spoke. He had confidence, he had charisma, he opened with a joke. It was a great thing for him.'”

“The original plan was, I was going to look at the music, books, entertainment that American kids are exposed to and compare it to the same thing that French kids are exposed to,” she said. “Then I started reading the American books that were written for adolescents, and went to my advisor and said, ‘You just can’t even believe what all is going on here.'”

She ended up doing her dissertation on education and American culture.

Since American culture is fluid and mobile compared to many other cultures, Siegemund expected to find media that would help adolescents navigate this time of identity development. What she found instead was that books written for young adults were largely devoid of content or meaning, and books for girls especially pushed the message that sexual identity is their only value.

Worse, these books are often promoted by schools and libraries. Siegemund asked why, and the response was that kids seem to like it, and at least they’re reading.

“It was allowed because kids are supposed to read because reading is good. But they’d forgotten why reading is good,” Siegemund said. It felt to her that students were being robbed of great literature for the most arbitrary reasons while misguided educators celebrated, instead of realizing they were undermining so much good they could be doing.

“This is what kills me the most—it robs kids of access, and appreciation, and love of some of the greatest things that mankind has ever created. And I think that’s theft,” she said. “In my research that I did for my dissertation, among those [small number of] kids who had read ‘The Odyssey’ … it was their favorite book.”

Still, at this time, Siegemund hadn’t thought of any of her research as being part of the political realm, much less connecting it to the left’s “long march through the institutions,” a topic AFA held a conference about in 2019. She wrote the dissertation from a place of compassion for the kids, and as an educator herself, and it wasn’t until the 2008 elections that she noticed again that great delivery mattered more to people than content, and the things she cared about really did exist in the political realm.

In 2010, Siegemund was visiting California when she first encountered AFA, and when she moved there in 2013, she became good friends with then-President Avi Davis. His sudden death in 2015 shocked the community, but those who were involved rallied to keep AFA alive.

The organization has a mission to uphold Western values and ideals, chief among them freedom, and stands against global governance and biased media. And while it’s not a conservative group by design, Siegemund says it just happens that the issues the AFA cares about happen to be those that conservatives rally around.

“People donate to political candidates and that’s all well and good. But without the culture, without people being made aware of issues rather than just candidates, it’s very hard to move forward,” she added.

The group holds events literary cafes and conferences on topical issues, such as a recent event about China on March 1.

Siegemund would like to expand AFA events, do trips, and get more involved in education because so many things really circle back to it.

“Kids at the high school level are so profoundly ignorant. As long as that keeps happening, we’re just going to have to keep fighting the same fight,” she said. “The indoctrination is at every level, it’s in the skills, it’s in the content. It’s in the attitude. It’s in the very air.”

She is deeply concerned for students who, in addition to being robbed of great thought, are taught from a young age that they should be ashamed of themselves and their country, as well as the damage that does to their still-forming identities.

Optimism and a Way Forward

Siegemund says nearly everything she does ties into her AFA work, except perhaps when she attends local classical concerts.

“And we sing! And I sit next to people from all over the world, and they stand. It’s one of the most moving things ever,” she said.

“Then, for a couple of hours, we are immersed in the most magnificent music. It’s breathtaking. Magnificent,” she said. “And for the entire time, you cannot hear a pin drop in the audience. Nothing. It’s silence. It’s reverential. It is love. We are all bonded there together in such appreciation of this beauty, and it’s miraculous.

“You can’t believe that the world that you’re living in all the rest of the time is so different from this. It is such a respite. It is so magnificent,” Siegemund said.

As an afterthought, she said perhaps that does tie into being a conservative, after all.

“As a conservative, one thing we need to take a little bit more time and doing is celebrating beauty, because it’s beauty that we’re losing, along with all kinds of other things. But if we can uplift beauty, I think that in itself is helpful,” she said.

“So engaging in the fight in the culture, yes, there’s schools and Hollywood and all of that. But just celebrating beauty, celebrating great art, going to those museums, going to those concerts is such a great way to be positive and to bring about positive change. How you celebrate beauty can inoculate, I think, against the destructive forces,” Siegemund said.

She is optimistic about the fight because more and more people seem to be joining. While California is known to be a very left-leaning state, she notes that some of the most outspoken conservative voices are also based right in Los Angeles.

Meanwhile, Siegemund doesn’t want to fall into the trap of failure of imagination. Her father was born in Berlin in 1928, and no one in the 1930s could have imagined the regime to come, and history tells us clearly that unimaginable horrors are possible.

“So I do take it as my personal mission and with AFA to prevent that from happening,” she said.