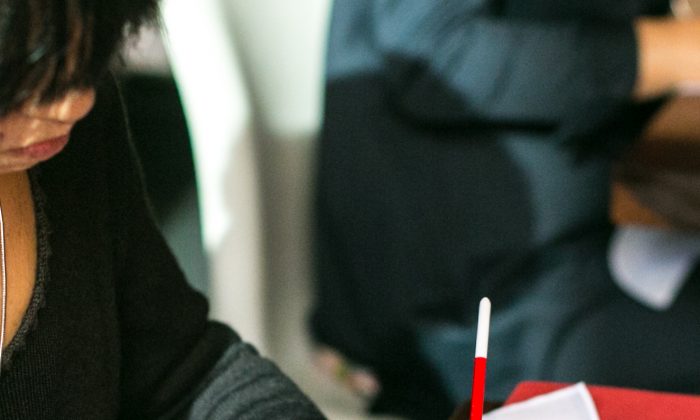 NEW YORK—It’s said that Zen monk Yuzensai Miyazaki created Kaga-Yuzen, the traditional hand dyeing method used to create the intricate floral scenes found on kimonos. The art is sometimes whimsical at first glance, but it is known for its focus on natural beauty, immense attention to detail, and strict adherence to procedure.

The first step is the design. Master artisans create elaborate scenes with nature motifs, rendering them in great detail and sketching them onto paper.

Step 2 is cutting white silk into kimono sections. Then the fabric is laid over the sketches on a glass table, and a light is shone underneath. The sketch is transferred onto the fabric using a brush and crushed dayflower juice—which will later wash out when it comes in contact with water.

The whole underside of the fabric then gets coated in a soybean broth or diluted glue mixture and dried. This washes away the lines drawn in dayflower juice, and leaves the glue paste.

Now it’s time for coloring. Traditional Kaga-Yuzen uses five colors, and the coloring is done in a gradated way. The fabric is steamed afterward so the colors really steep in.

Then the fabric is washed. Traditionally, finished fabrics were washed in rivers, but today this is done in man-made watercourses.

The final step is to complete the kimono, fine-tuning the colors if necessary and pressing the garment.

Kaga-Yuzen is a method that focuses on natural beauty.

The designs are made of natural elements like flowers complete with imperfect leaves, birds, and landscapes. Traditionally, the dyes used were natural dyes of the five classical hues: indigo blue, crimson, chrome yellow, grassy green, and royal purple.

Toshiharu Hisatsune, a Kaga-Yuzen master artisan of 43 years, said the dyeing might be his favorite part.

Hisatsune, who has created ornaments for the betrothal gifts of the imperial family of Japan, says he was lucky he came to Kaga-Yuzen knowing nothing.

He’d studied engineering at a university in Kanazawa, the capital of Ishikawa Prefecture in Japan, and a region known for its artisans. He had the idea that instead of engineering for a company, he wanted to create something all for himself. Then he met some Kaga-Yuzen artisans. He saw the work of a master artisan and thought, “Oh, this is pretty simple.”

He was told he didn’t have to have all of the knowledge, or a background in art, Hisatsune recalled. That turned out to be the most important lesson.

Kaga-Yuzen is an oral history, not something written down in textbooks, and is passed on from teacher to student. It’s also very much an art that requires following the steps exactly, drawing within the lines.

If someone has all these ideas about design in his mind already, he ends up being harder to teach, Hisatsune explained. So with nothing in his mind, he “was permitted to enter this world,” he said.

The art, he soon learned, was not simple at all, Hisatsune said with a laugh. But copying his teacher, work after work, he learned Kaga-Yuzen, and learned how to create his own designs.

In designing, Hisatsune said he tries to create something that really suits the personality of the person who will wear the garment, to pick colors that suit the person’s life. That always brings the wearer happiness.

“It makes me happy to see … their expressions brightened because the design is suited to the person,” he said.