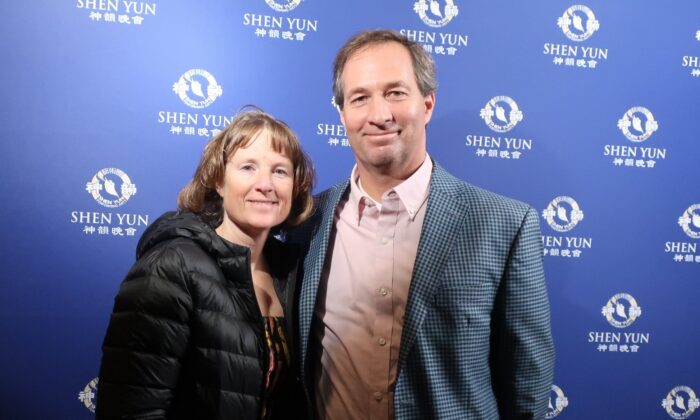 HUNTSVILLE, Ala.—Audience members are often blown away by the talent displayed by Shen Yun Performing Arts. It was no different for the audience at the Von Braun Center Concert Hall in Huntsville this evening.

Chris and Sheri Wilson were happy to share their appreciation for New York-based Shen Yun.

“It was very colorful, very energetic. It’s the first time we’ve seen something like that,” Mrs. Wilson said.

“[It is] something totally new and different; it takes a lot of talent to sit there and not only be able to do the acrobatic portions of it, just the use of props and [to] be able to do that and all in unison is just amazing!” she added.

Shen Yun is dedicated to letting their audience see China as it was before communism. Unfortunately, Shen Yun is not able to perform in China.

“I think it’s just listening to the music from China and seeing these different stories in China and how they can’t talk about those stories in China. I think [Shen Yun] is a great medium to be able to tell the story,” Mr. Wilson said.

“I don’t know a lot about what’s going on, but it’s a shame something so beautiful can’t be seen everywhere,” Mrs. Wilson added.

Mr. Wilson shared that experiencing Shen Yun gives the audience a sense of being lifted and positivity.

“Just watching it makes you feel better about yourself and it’s lifting, energetic, spiritual, and all those things combined,” he said.

Richard Marsden, a corporate attorney who was also in the audience, said he felt that something with so much culture should not be oppressed.

“All the history and culture, for all those in China that don’t get to see it, under what seems to be a pretty oppressive regime, and it’s so much to see! So it makes you sad,” he said.

Yet although Shen Yun is restricted in China, Mr. Marsden said that this is why people should take the opportunity to experience it outside of China.

“The whole show is uplifting! And it’s great history. The show itself is good, it just makes you think about why you have to see it here, and you couldn’t see it in its own country. They’re doing a great job so it’s very well done,” he said.