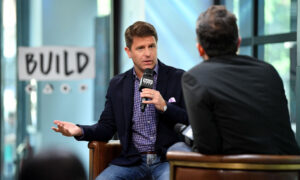 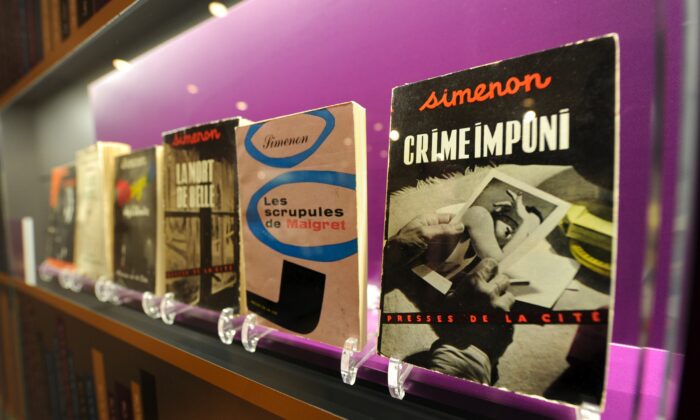 Books by Belgian-writer Georges Simenon at the Museum of Letters and Manuscripts, now permanently closed, in Brussels. (JOHN THYS/AFP via Getty Images)
Literature

French publisher Librairie Arthème Fayard introduced the world to Jules Maigret, an inspector with Paris’s Brigade Criminelle, with the 1931 novel “The Strange Case of Peter the Lett” (since republished as “Pietr the Latvian”). A slim, fast-paced police procedural, the novel helped to redefine crime and detective fiction in France less than a decade before the collapse of the Third Republic (1870–1940).

In 1931, there were two primary archetypes of the fictional detective: the ratiocination machine and grand puzzler-solver first created by American Edgar Allan Poe and perfected by the British author Sir Arthur Conan Doyle, and the so-called hard-boiled private eye of the pulp magazines and pens of authors Dashiell Hammett and Raymond Chandler.

Maigret conformed to neither tradition. Instead, the squat and bulldog-like Maigret is a workingman detective who eschews theatrics in favor of focusing on the easily corruptible nature of human beings. When working a case or not, Maigret enjoys simple pleasures like beer, his tobacco pipe, and his wife’s cooking.

Maigret came from the brain of Belgian writer Georges Simenon (1903–1989). Born in Liège 10 minutes after midnight on Friday the 13th, Simenon’s superstitious mother recorded his birthday a day earlier on Thursday. Simenon’s family united the ancient ethnic divide of his native country, as his father, Désiré Simenon, was a French-speaking Walloon. His mother, Henriette, spoke Dutch and had roots in Dutch Limburg, including an 18th-century thief named Gabriel Brühl.

At age 16, Simenon began working as a journalist. This profession would take him to Paris three years later, where he covered local crime and the city’s sordid nightlife. Simenon was a prodigious writer who apparently typed 80 pages a day. Between 1923 and 1933, he authored 200 pulp fiction novels under 16 different pen names.

Simenon would maintain this prolific output with his Maigret character. The inspector would go on to appear in 75 novels and 28 short stories until 1972. In the scope of French history, the Maigret novels survived the fall of the Third Republic, Nazi occupation, the divisive wars in Indochina and Algeria, the fall of the Fourth Republic and rise of the Fifth, and the epoch-making protests of May 1968.

Despite his craftsman-like approach to writing (he could write a novel in 11 days), Simenon’s work is of the highest quality. Besides his Maigret novels, he also wrote what he called “roman durs,” that is, more serious and psychological novels, like “The Engagement” (1933), “The Man Who Watched Trains Go By” (1938), and “The Strangers in the House” (1940).

Simenon’s work earned comparisons to Anton Chekov by no less an authority than William Faulkner. The quality of Simenon’s work is nothing less than miraculous given his schedule and turbulent personal life, the latter of which included a tumultuous marriage; moves between France, Switzerland, and the United States; and his awful appetite for extramarital affairs.

Maigret remains at the heart of Simenon’s legacy for obvious reasons. The character, who has appeared on television and in movies since Jean Renoir’s 1932 film “Night at the Crossroads,” is one of literature’s first true-to-life detectives.

Unlike Sherlock Holmes or Sam Spade, Maigret is a relatable everyman. He does not have superhuman strength or incredible genius. He is not an amoral dispenser of violence. He is merely a product of rural France and the son of an estate manager who became a police officer in order to earn a living. Maigret is a married man who is happy in the domestic sphere. His wife, Madame Maigret, is always disappointed by her husband’s work because it ruins her vacation plans, and yet she never fails to cook him something nice for lunch. When it proves impossible to enjoy his wife’s fine dining, Maigret prefers sandwiches and beer.

As a detective, Maigret shows a strong thirst for justice. Each Maigret novel presents the clues in order, plus Simenon always shows Maigret contemplating the case alongside his audience. Rare are shocking conclusions or illogical climaxes, both of which pepper the work of other mystery titans Conan Doyle and Dame Agatha Christie. The clues really are not that important to begin with, as the Maigret novels are less about puzzles and more about studying human nature.

Maigret cares the most about what drives people to kill—their motivations, their selfish desires, and their jumbled attempts to maintain a false sense of either innocence or righteousness. Maigret is never an imperious judge but acts more like a disapproving father. He understands why people do bad things, but he never excuses their bad behavior.

Simenon’s Maigret novels are short, sparse, and incredibly well-written. They also serve as testaments to the power of common people. Maigret is nothing special, and the police officers he works with are ordinary too. This is no slight at all, as ordinary people are the majority in every country. Without ordinary people there would be no food, no services, and, in the world so beautifully crafted by Georges Simenon, no justice.