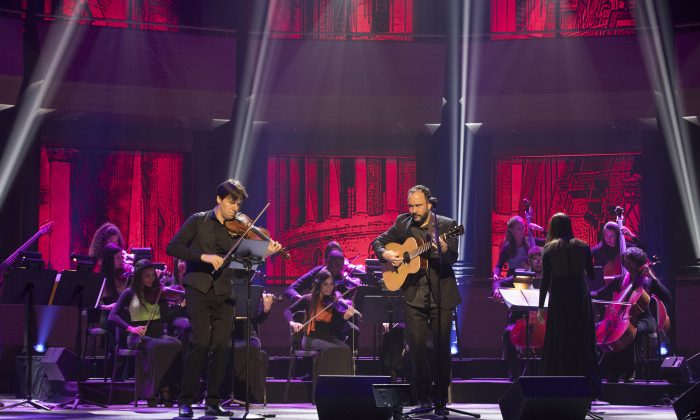 Joshua Bell Brings the ‘Seasons of Cuba’ to Lincoln Center

NEW YORK—Grammy Award winning violinist Joshua Bell went to Cuba on a trip organized by President Obama’s Committee on the Arts and the Humanities. The aim was to create an exchange between American and Cuban musicians.

The happy result of the trip was the “Seasons of Cuba” concert by Bell and his Cuban friends at Jazz at Lincoln Center’s Rose Hall.

Bell acted as the host of the evening and performed throughout most of the concert. As he said at the outset, the program was eclectic.

One of his unexpected discoveries in Cuba was the high quality of classical musicians. At the concert, he presented the Chamber Orchestra of Havana, making its U.S. debut. The ensemble, conducted by Daiana García, is mostly made up of young women. All the members are graduates of the Cuban University of Arts.

Bell and the orchestra began with “Summer” from Vivaldi’s “The Four Seasons.” Bell has previously made a highly praised recording of the entire work with the Academy of St. Martin in the Fields, which he now leads. With the Chamber Orchestra of Havana, he again demonstrated his technical proficiency and verve in a piece he has performed countless times.

The musicians moved from baroque music to tango with the Summer section of “The Four Seasons of Buenos Aires” by Argentinean composer Astor Piazzolla.

At the end, everyone joined for an ebullient rendition of ‘Guantanamera.’

Bell said that one of his idols is legendary violinist Jascha Heifetz and, as a tribute, he played Heifetz’s arrangement of the lilting “Estrellita” (Little Star) by Mexican composer Manuel Ponce. Heifetz had played the piece in the 1939 Archie Mayo film “They Shall Have Music.”

Cuban pianist/composer Aldo López-Gavilán came out to solo on his own work, “Epilogo.” Incidentally, as Bell pointed out, López-Gavilán is married to conductor García, who blew her husband a kiss.

The classically trained soprano Larisa Martínez won the audience over with two numbers by Cuban composers: the zarzuela “Cecilia Valdés” by Gonzalo Roig and “Maria La O” by Ernesto Lecuona.

Bell explained that the first Cuban piece he ever played was the effervescent “Para Ti,” which he performed with the pianist/composer Jorge Gómez and his group Tiempo Libre on Bell’s album “At Home With Friends.” The two again joined for the engaging work, which alternated lyrical passages by the violinist and dance rhythms.

Cuban singer and songwriter Carlos Varela has been called “The Poet of Havana,” which happens to be the title of HBO Latino’s documentary film about him. His socially conscious songs, frequently critical of the Cuban government, have made him a hero both for those within his native country and the exile community here. Varela (who accompanies himself on guitar) sang his haunting song about Havana: “Habaname.”

Dave Matthews was one of the Americans on the trip with Joshua Bell and he spoke of the wonderful experience of collaborating with Cuban musicians. He then joined with Varela for one of the Cuban’s songs, “Muros y Puertas” (Walls and Doors). This was followed by three of Matthews’s own pieces, “Samurai Cop,” “Here on Out” and “Ants Marching.”

At the end, everyone joined for an ebullient rendition of “Guantanamera.”

The “Seasons of Cuba” concert was filmed and will be broadcast on “Live From Lincoln Center” on PBS on Dec. 16 at 9:00 p.m. as part of the PBS Arts Fall Festival.

Barry Bassis has been a music, theater, and travel writer for over a decade.