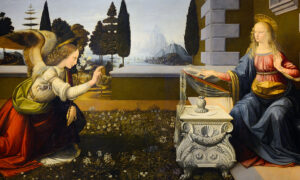 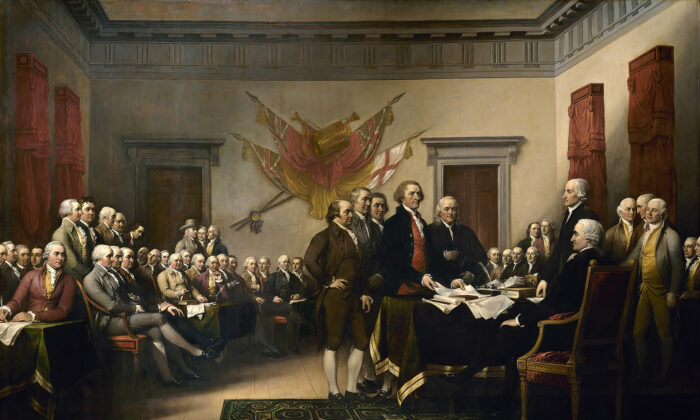 July 4, 1776: The Declaration of Independence is signed, and the United States of America emerges as a free and independent country after years of conflict and turmoil. The birth of the American nation also heralded a new chapter in world history. These facts are rooted firmly in American history and inform our culture and very way of life.

John Trumbull (1756-1843), a venerated artist and soldier of the Revolutionary War, depicted pivotal moments from these early chapters of the country’s history, immortalizing our origin story in perpetuity. Four of his larger-than-life paintings hang in the Rotunda of the U.S. Capitol. He also painted George and Martha Washington and created iconic portraits of the Founding Fathers.

Among Trumbull’s military duties was rendering British and American fortifications in Boston, utilizing his artistic skills for strategic gain. Trumbull was appointed one of George Washington’s aides-de-camp (headquarters staff), and he painted the general-turned-president numerous times. Washington at Verplanck’s Point, a gift from the artist to Martha Washington, depicts a scene from the Revolutionary War, though it was painted years later in 1790. Trumbull painted Washington in a heroic composition, with fastidious detail given to his uniform, rank, and horse. The artist drew on an established Renaissance technique by depicting a military display in the distant background, affirming Washington as the gallant protagonist while capturing important historic detail. This background shows Washington staging his troops in honor of French commander Comte de Rochambeau: the French general who helped Washington win the Battle of Yorktown in 1781—a decisive military victory for the Americans.

The portrait was so popular that the City of New York commissioned Trumbull to create a modified version of it for the Governor’s Room of New York City Hall. The New York commission is a large-scale composition, and a different episode from the Revolution is seen in the background. This painting depicts New York’s Evacuation Day: In 1783, the British army retreated from Manhattan Island, after years of delay and occupation. Washington, along with Governor George Clinton, followed behind in a triumphant procession.

The series of paintings at the Rotunda similarly embraces themes of British resignation and American victory. Congress commissioned Trumbull to paint scenes of the American Revolution in 1817, perhaps as a renewed celebration of independence following the War of 1812. President James Madison, the “Father of the Constitution,” selected the subject matter of the four paintings and determined the size—each is a grandiose oil-on-canvas measuring 12 by 18 feet.

Two paintings present British defeat: Surrender of General Burgoyne and Surrender of Lord Cornwallis. The former depicts an episode from 1777, when Burgoyne and his unit were surrounded by American soldiers, and he was forced to concede defeat. This marked the end of the Second Battle of Saratoga—a turning point in the war.

General Horatio Gates, a British-born leader of American troops, is the central figure. Notably, Burgoyne himself isn’t central to the composition, although he offers his sword as a sign of deference. Additionally, the scene is a peaceful one: weapons are concealed or otherwise not in use, and officers vigilantly observe the event. These compositional elements indicate that the Americans have control of the war, but that they’re also tactful and merciful.

The Surrender of Cornwallis is a similarly peaceful scene. This episode—Lieutenant General Cornwallis’s defeat at Yorktown in 1781—marked the end of the last major campaign of the American Revolution. Cornwallis lost his siege of Yorktown, Virginia, ultimately ensuring American independence. A French fleet had obstructed Cornwallis’s escape route at sea, and George Washington seized the opportunity to end the battle once and for all. Trumbull also paid homage to this event in the portrait of Washington described above, thereby reiterating pivotal moments of the Revolutionary War.

Like the depiction of Burgoyne’s surrender, an early version of the American flag flies proudly in the upper-right corner of the composition. It’s most likely a Cowpens flag, a modified version of Betsy Ross’s design. However, the two paintings differ in their representation of British and American soldiers. In Burgoyne’s surrender, soldiers are depicted on a shared horizontal plane. Trumbull dramatically alters the composition in Cornwallis: The opposing armies are entirely separated, a visual reminder of the division that years of warfare has caused. Cannon smoke hangs heavy in the air: This victory has been hard-won. Cornwallis himself isn’t present, and his representative, General Charles O’Hara, is painted at the same level as American General Benjamin Lincoln’s horse. Lincoln, meanwhile, is the central figure and he towers above his British counterpart. The two sides are nearly symmetrical with soldiers and horses mirrored, with one notable exception: Washington is astride a brown horse in the central middle-ground, but there is no corresponding British officer. With this subtle gesture, Trumbull visually suggests that Washington is without equal.

Trumbull’s reverence for the general is brought to its grandest fruition in the third Rotunda painting, General George Washington Resigning His Commission. This painting celebrates what is considered one of the most patriotic and influential episodes of the Revolution, and indeed, world history: Washington resigned his position as commander-in-chief of the Continental Army in December 1783, thus ensuring that the nascent United States would be a civilian-based republic rather than a military dictatorship. Significantly, while the Declaration of Independence had been signed (July 1776) and the Treaty of Paris had formally ended the Revolution (September 1783), what would become the American government was still a nebulous entity. The Constitution, which frames the Office of the Presidency and the now-familiar three branches of government, wasn’t written until 1787, and Washington’s first term as president commenced in 1789. Washington, a beloved war hero, had the opportunity to seize absolute power for himself, but by resigning his post and returning to civilian life, he set the precedent for the democratic process. His resignation also foreshadowed his choice to retire from the presidency after two terms, a tradition that was made official in 1947 with the 22nd Amendment.

The depiction of Washington is based on Trumbull’s earlier portraits, described above, and the artist is consistent in representing the icon in his general’s uniform. Befitting the occasion, Washington is the central figure, illuminated from an outside light source. To the viewer’s right of Washington, there is a cloaked and unoccupied chair, larger than the others. The cloak resembles a royal mantle, a garment reserved for kings and emperors. For reference, a similar one is worn by Napoleon in a famous painting of his coronation, completed only a few years before Trumbull’s Rotunda commission. By eschewing this mantle and makeshift throne, Washington rejects authoritarian, imperial leadership. Trumbull also depicts Thomas Jefferson, James Monroe, and James Madison. By including these future presidents, the artist emphasizes Washington’s legacy and the foundations of American democracy: these leaders would be elected, which was a revolutionary concept in the 18th century.

Trumbull captures another truly revolutionary event in the fourth and final Rotunda painting, succinctly titled, Declaration of Independence. Because of its subject matter and appearance on the reverse of the two-dollar bill, it’s arguably the most famous painting in the series. In this scene, Thomas Jefferson, the primary author of the Declaration of Independence, presents his first draft of the document to the Second Continental Congress, led by the well-known signatory, John Hancock. Jefferson is joined by four other Founders, including John Adams and Benjamin Franklin. The event takes place in what is now Independence Hall in Philadelphia. Captured British flags are proudly displayed on the walls as trophies of war.

A total of 47 individuals are depicted in this composition: 42 of the 56 signatories, along with five others. The artist portrayed the men from life or drawings in order to capture their likenesses for posterity: It was important to Trumbull to create a realistic group portrait. Two centuries later, this choice has left a profound impact: We as viewers are reminded that these were real, living patriots forging a new nation and a new way of life.

Trumbull’s canvases aren’t merely historical records, passively channeling information from one generation of Americans to the next. Rather, Trumbull’s masterpieces capture the very essence of our revolutionary origins and reflect our shared values. His artwork is the cultural inheritance of each American, reminding us to cherish our independence every day of the year.

Dr. Kara Blakley is an independent art historian. She received her Ph.D. in Art History and Theory from the University of Melbourne (Australia) and previously studied and taught in China and Germany.