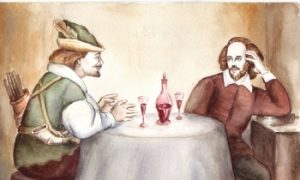 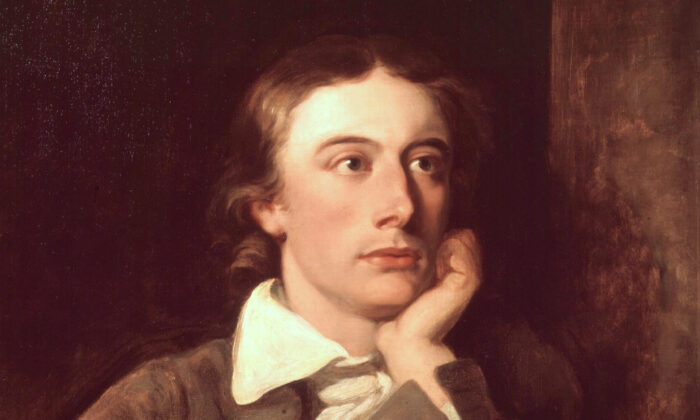 A portrait of John Keats (1822) by William Hilton, after Joseph Severn. Keats lost most of his family members to tuberculosis, the disease that would eventually take his own life on Feb. 23, 1821. (Public Domain)
Literature

John Keats: How His Poems of Death and Lost Youth Are Resonating During COVID-19

In John Keats’s poems, death crops up 100 times more than the future, a word that appears just once in the entirety of his work. This might seem appropriate on the 200th anniversary of the death of Keats, who was popularly viewed as the young Romantic poet “half in love with easeful death.”

Death certainly touched Keats and his family. At the age of 14, he lost his mother to tuberculosis. In 1818, he nursed his younger brother Tom as he lay dying of the same disease.

After such experiences, when Ludolph, the hero of Keats’s tragedy, “Otho the Great,” imagines succumbing to “a bitter death, a suffocating death,” Keats knew what he was writing about. And then, aged just 25, on Feb. 23, 1821, Keats himself died of tuberculosis in Rome.

His preoccupation with death doesn’t tell the whole story, however. In life, Keats was vivacious, funny, bawdy, pugnacious, poetically experimental, politically active, and above all forward-looking.

He was a young man in a hurry, eager to make a mark on the literary world, even if—as a trained doctor—he was all too conscious of the body’s vulnerability to mortal shocks. These two very different energies coalesce in one of his best-loved poems, written in January 1818 when the poet was in the bloom of health.

“When I Have Fears That I May Cease to Be” is a poem of personal worry, according to biographer Nicholas Roe. In it, Keats is anxious that he won’t have time to achieve poetic fame or fall in “unreflecting love,” and these fears and self-doubts take him to the brink.

But as brinks go, this one doesn’t seem all that bad. The poem is romantic with a small “r”—wide-eyed, dramatic, sentimental—its vision of finality, of nothingness, gorgeous in its desolation, and all-importantly painless. Who can read the poem’s final lines without themselves feeling a pull to swooning death, half in love with it, as Keats professed to be?

When I have fears that I may cease to be
Before my pen has gleaned my teeming brain,
Before high-pilèd books, in charactery,
Hold like rich garners the full ripened grain;
When I behold, upon the night’s starred face,
Huge cloudy symbols of a high romance,
And think that I may never live to trace
Their shadows with the magic hand of chance;
And when I feel, fair creature of an hour,
That I shall never look upon thee more,
Never have relish in the faery power
Of unreflecting love—then on the shore
Of the wide world I stand alone, and think
Till love and fame to nothingness do sink.

That’s what I used to think, at any rate. Lately, in the pandemic, I’ve begun to read this poem rather differently. Lensed through long months of lockdown, the sonnet’s existential anxieties seem less abstract, grand, and performative, and more, well, human.

It’s a poem that will resonate with the youth who are cooped up indoors, physically isolated, unable to meet and mingle, agonizingly aware of weeks slipping by, opportunities missed, disappointments mounting. This poem has made me almost painfully empathetic toward their plight.

The sonnet’s fears of a future laid to waste are shared by whole generations whose collective mental health is under siege. In his last surviving letter, written two years after the sonnet while dying in Rome, Keats records a “feeling of my real life having past,” a conviction that he was “leading a posthumous existence.” How many of us are experiencing similar thoughts at the moment?

Of all the Romantics, Keats perhaps knew most about mental suffering. He grew up in Moorgate, just across from Bethlem Hospital, which was known to London and the world as Bedlam. Before he turned to poetry, Keats trained at Guy’s Hospital, London, where he not only witnessed firsthand the horrors of surgery in a preanesthetic age but also tended to patients in what was called the lunatic ward.

It was all too much for him. Traumatized by the misery and pain he felt he could do little to alleviate, in 1816 he threw medicine in for the pen. His experiences at Guy’s, though, and the empathy he developed there, found their way into his writing. For instance, in “Hyperion,” his medical knowledge helps him to inhabit the catatonic state of “gray-hair’d Saturn,” who sits in solitude, “deep in the shady sadness of a vale,” despairing after being deposed by the Olympian gods. The vignette is a moving image of isolation and enervation that speaks to us today.

As for lockdown, Keats was no stranger to its pressures and deprivations. During periods of illness in Hampstead in 1819—precursor symptoms of tuberculosis—he was reluctant to venture out, isolating himself. In October 1820, he set sail for Italy in the hope that warmer climes would save his lungs. On arrival, his ship was put into strict quarantine for ten days. In letters to his friends, Keats described being “in a sort of desperation,” adding, “we cannot be created for this sort of suffering.”

Keats was a poet of his age, his own social, cultural, and medical milieu. And yet, on the bicentenary of his death, he’s also—more than ever, perhaps—a poet of ours. A poet of lockdown, frustration, disappointment, fears … and even hope.

Because even in those last, scarcely imaginable weeks in Rome, 200 years ago, holed up in a little apartment at the foot of the Spanish Steps, he never quite gave up on the future, never relinquished his dreams of love and fame.

Richard Marggraf-Turley is a professor of English literature at Aberystwyth University in the UK. This article was first published on The Conversation.