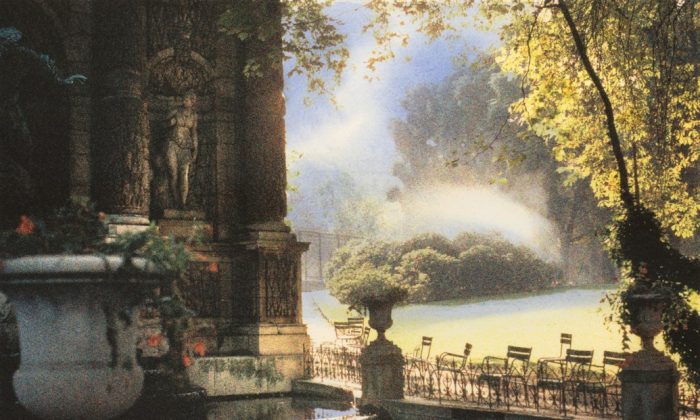 Jennifer Dickson Exhibit a Captivating Sampling of a Prolific Artist

OTTAWA—If you haven’t encountered a Jennifer Dickson artwork before you are in for a treat. A retrospective of the Ottawa artist’s images from 1969 when she arrived in Canada to the present is on display at Wallack Galleries until March 8.

Dickson, whose works are part of permanent collections in galleries all over the world, is one of Wallack’s long-standing and beloved artists, and this collection presents a sampling of the countless images and the various media she has used in her works over the years.

Included are photographic etchings (which she no longer does due to the damaging effects of the acid-bath fumes); photographic prints in intensely coloured cibachrome, silver gelatin, and giclee; and four non-photographic watercolours. Over half of the photo images are black and white prints, water-coloured in delicate hues to provide a softer interpretation of the original elements.

The images contain architectural elements such as stone statues or stone walls, masses of flora, and some manifestations of water as the scenes capture lush gardens and landscapes. Water is ever present, which is fitting as the show is titled Giochi d’Acqua (Water Games).

Water is meaningful to Dickson and is included in her images in its many forms—both moving, as in fountains or waterfalls, and static, such as tranquil pools reflecting the surroundings or filled with water plants. Sometimes arched streams dance in an image. Other times, the water is a white streak that captivates viewers until they move through the rest of the image and think about what they’ve seen.

Dickson said she might visit a garden many times over many years to “get” what the site is about.

“When you visit a garden you can’t just go in and expect it to reveal its secrets to you. You have to give the garden enough time to reveal itself to you,” she said. “And so it is with the images of gardens, water, and other elements. You need to stand back and give them time to speak to you.”

Dickson used her trademark soft focus to make the black and white prints. They are hand-coloured with watercolours and relay dreamy, sometimes beautiful and sometimes abandoned-looking settings. There is a haunting quality to the images that can be positive or negative, an effect that gives the viewer something to ponder.

“In my work there is always something that’s incomplete, always some questions that I suppose I don’t answer for people. People have to answer that themselves. So for me, the viewer has to bring something of themselves to that work and then the work becomes complete,” Dickson said in describing some of the qualities in her images.

Using statues and other hard elements mixed with foliage and water in intriguing compositions, coupled with her signature technique of hand-tinting the prints, produces images that are lovely to behold and provoke the viewer’s interest as they encompass a love of nature and yet show the effects of humans imposing their will on it.

“When you slow things down, other facets of knowledge become apparent,” she said. “What do I see in her work? I see stillness, and the stillness allows me to follow her into the places where she’s gone.”

Korp appreciates Dickson’s images and has several in her home. “For 20 years one of her photolithographs hung at the foot of my bed. When I was away for a long time I found that that was something I missed a lot—not seeing that when I awakened,” she said.

Dickson has received much recognition for her artistry and in fact, the National Archives of Canada views the body of work she has produced to be so remarkable that it established the Jennifer Dickson Fonds in 2002, an ongoing project that will archive her lifework. This world-renowned artist remains the only Canadian to have been named a Royal Academician by Britain’s Royal Academy of Arts.

Dickson will give a talk on “Light and colour in the garden” on Saturday, March 8.