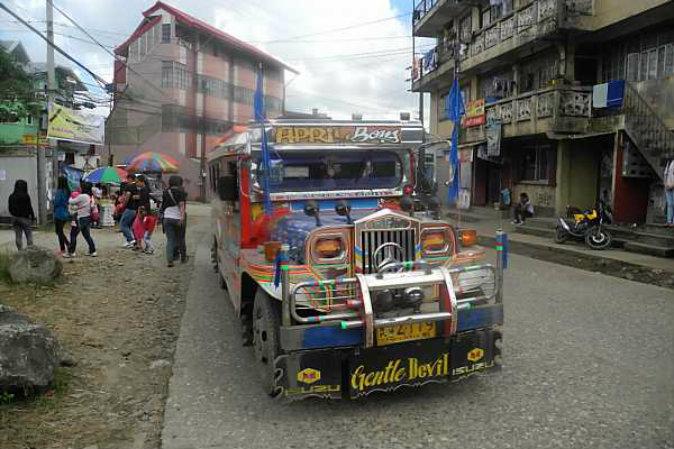 Jeepneys in the Philippines

The streets of the Philippines are dominated by brazenly colored, heavily ornamented, black exhaust smoke belching, military jeep inspired vehicles. They are called jeepneys, which is either a portmanteau of the words “jeep” and “jitney” or “jeep” and “knee,” because when you ride in these things you are wedged in knee to knee with other passengers. But one thing that’s for sure is that they are the staple form of public transportation here.

The jeepney is an icon of the Philippines — in the same league as the red double decker bus in London, the yellow taxi in New York, the moto taxi in Peru, and the little beetle-like auto-rickshaw in India. A specimen of a jeepney was even exhibited in the Philippines pavilion at the 1964 New York World’s Fair as the prime symbol to represent the country. When Pope John Paul II visited Manila in 1981 he apparently left his “pope mobile” at the Vatican and instead opted to ride in, yes, a jeepney.

This seemingly simple public transport vehicle is deeply intertwined with contemporary Filipino society and history, and in many ways can also be used as a lens to see the culture itself. It’s not only something that Filipinos can ride in, but something they can identify with as well.

Industrious Filipinos took those old military jeeps, extended them two meters or so, slapped on metal roofs, threw a couple of benches into the backs, coated them in vibrant colors, ornaments, and an excess of chrome, and began transporting passengers. Almost instantaneously the jeepney culture was born, and these vehicles became the defacto way that Filipinos began getting around.

Eventually, as the form of transportation became more popular and the original jeeps began clunking out, a second wave of jeepneys emerged. These ones were distinctly ‘made in the Philippines.’ Backyard garages began appearing that manufactured these vehicles by hand. The main parts — engines, transmissions, etc . . .– were mostly imported from Japan, while the chassis and bodies where molded from scratch or retrieved from scrap yards. This multi-national, multi-method conglomeration of materials were then mashed together using an array of different designs to create something distinctly Filipino, which in a very direct way represented the culture itself.

Budget for 2 Weeks in the Philippines

“There is bit of Spanish, Mexican traits there; how they incorporate vivid colours, fiesta-like feelings. There is a little of the Americans because it evolved from the Jeep. There is a little Japan because of the Japanese engine. But it was built by Filipino hands . . .,” reported an article on BBC.

Eventually, one of these family-run, backyard jeepney manufacturing operations rose to the top and became the brand the vehicle has been associated with ever since. It was called Sarao, and they operated a factory to the south of Metro Manila. The company was started with ₱700 in 1953 by Leonardo Sarao, who at the time was a driver of a horse-drawn cart, and eventually became a multi-million dollar operation. At the company’s peak in the 70s and 80s, the plant had 400 workers who kicked out 18 to 20 jeepneys per day — all of which sported the brand’s metal horse statues on the roof. At one point, Sarao jeepneys outnumber all others in Manila by a margin of 7 to 1.

Today, there are over 50,000 jeepneys on the streets of Manila, and untold thousands more around the country.

I stood on the side of Magasaysay Road in Baguio and prepared to flag down a jeepney. I wanted to visit one of the garages that repaired and painted these ‘kings of the road.’

Jeepneys generally follow set routes. They gather together at designated starting points and line up one after another. A barker keeps track of them all and tells each driver when it’s his turn to go. The driver then does his route, collecting passengers, dropping them off, all the way to the end of the line, where he then turns around and does the same thing in the opposite direction.

This means that getting a ride in a jeepney is simply a matter of standing on the side of the road in the direction you want to go and flagging one down that has your destination painted on it. All jeepneys have their routes written below their windshields and on their sides.

I soon spotted a jeepney that was going my way, so I stuck out my arm and it quickly came to a stop. I climbed in through the open back and made my way to the front of the bench, right behind the driver.

The prices for rides were listed on a sheet of paper that was attached to the back of the front seats so all of the passengers could see it. The cost was based on how far along the route you wanted to go. Though with the highest price hardly breaching 40 cents U.S. it seemed a little moot. Traveling by jeepney is cheap, and this is one of the reasons why they are still so popular.

I called out to the driver, telling him where I wanted to go — a far flung intersection way down the line — and asked how much it would cost. He shrugged, said 12 pesos, and I handed the coins up to him. He reached his hand back while still driving, grabbed the change, and tossed it into a metal dish that had been soldered onto the dash.

Some jeepneys have conductors who take care of things on the passenger end, but they must be paid and fed lunch, so many drivers don’t find it worth it to carry them along. The loss of a few passengers taking a free ride does not equate to the cost of a guy whose job it is to prevent this. While conductors were not necessarily rare in Baguio, most drivers seemed to do without them. The passengers just paid on their own at a convenient point along their way, passing money down the bench to the person sitting nearest the driver, who would hand it over when the opportunity allowed.

Jeepneys can carry around 18 passengers on their parallel benches — and many more hanging on outside or sitting on the roof if need be. This makes them rather crowded, though social places. Like so, there is an unwritten code of conduct for riding. Pushing and shoving, talking loudly, and making a scene is generally considered rude. Old people are offered seats if there are none available. Basically, the rule is don’t be a dick.

In such close social quarters most Filipinos tend to politely sit in silence. Though not necessarily an unfriendly place, the social protocol in a jeepney is similar to that of an elevator. To prevent bothering others, loquaciousness is generally not encouraged, and most ride without saying a word other than yelling out “para” when they want to be let off. Though banging the ceiling or rapping a coin against something metal also works.

Outside of high traffic areas in the center of cities, jeepneys don’t really have set stops. Instead, they travel in incredibly short spurts, seemingly stopping to pick up or drop off passengers every 50 to 100 meters or so, inch-worming their way down the road. I sometimes debated if I could walk faster.