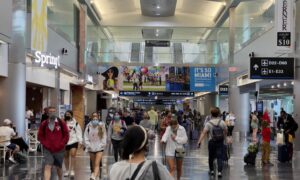 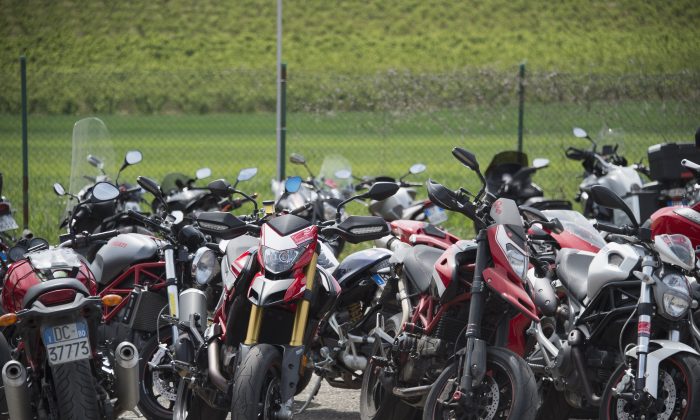 MONTEPULCIANO, Italy—Gingerly balancing on the foot pegs of the big Ducati motorcycle, I turned the machine down a dirt-path hill between olive trees and grapevines.

Instructors from a course offered by the bike’s Italian manufacturer wanted to show how its off-road antilock braking system would stop the wheels from seizing under hard braking, and keep me from dumping myself and the $20,000-plus motorcycle into the otherwise bucolic Tuscan scenery.

Reaching an orange cone near the bottom of the hill, instructors said to hit the brakes—hard.

I had to force my right hand and foot to override my brain’s misgivings to clamp down on the levers. But my fears were unfounded. The electronics worked their magic and the bike slowed to a walking pace without incident.

I had enrolled in the Ducati riding course as part of a 10-day European motorcycling excursion while my teenage daughter attended a Spanish language camp in Barcelona.

The bulk of my trip took place on a big BMW touring bike through 3,000 miles of spectacular scenery and serpentine mountain passes in the Spanish Pyrenees and Austrian Alps, down the bustling streets of the glitzy French Riviera and to legal speeds of more than 135 mph on the German autobahn.

Stops along the way included visits to the factories of Ducati in Bologna and MV Agusta on the outskirts of Milan, the annual BMW Motorrad Days gathering in a Bavarian winter resort town and to Tavullia, hometown of Italian motorcycle racing legend Valentino Rossi, where church bells ring when the town’s favorite son takes another win.

At pit stops for coffee and gas, a glance at the map beckoned detours to an isolated country road, Alpine pass, or to check a previously unvisited country off my list. Andorra, Monaco, San Marino? Why not.

Motorbikes are everywhere in Europe. They are easy to squeeze through traffic and park at busy tourist sites. Their fuel efficiency gives some relief from gas prices around $6 a gallon that seem high to Americans accustomed to paying closer to $2. Another welcome perk is a discount on the French motorway, though I was forced to resort to my patchy language skills when an error message flashed up at one automated tollbooth.

“Je suis une moto?” I offered uncertainly over the intercom. I could have sworn I heard faint laughter before the gate swung open and sent me on my way.

All you need to rent a motorcycle in Europe is an unrestricted motorcycle endorsement (usually added to a regular driver’s license) and an international driver’s license, which you can get in the United States for $15 from AAA. Note that most U.S. auto insurance providers and credit cards don’t cover motorcycle rentals. At IMTBike, the standard deductible for damage or theft is 2,000 euros, but I chose to pay an extra 20 euros per day for the peace of mind of a 350-euro deductible if someone made off with the bike, or if a tip-over in a gravel parking lot did expensive cosmetic damage.

Numerous options throughout Spain like IMTBike and Hispania Tours offer both guided tours and individual rentals. Keep an eye out for BMW Official Partner status that seeks to ensure German bikes are kept to top maintenance and servicing standards. BMW also offers bikes through the rental car giant Sixt in Germany during riding season. Ducati supplies bikes and instructors on several road or track courses through its Ducati Riding Experience program in Italy. This year’s two-day off-road course in Tuscany costs 680 euros, not including hotel.

Generally, daily rates decrease the longer you rent the bike. IMTBike charges 174 euros daily for BMW R1200 RT rentals of three days or less. For a week or more, the rate drops to 129 euros daily. The daily mileage cap is 300 kilometers on shorter rentals, with a 30-cent charge for every kilometer after that. There is no distance limit for rentals over a week. Most bikes come with built-in luggage, and extra travel bags can usually be left at rental offices.

BMW may be headquartered in Bavaria in southern Germany, but its motorcycles are made in Spandau in western Berlin. The sprawling factory makes up to 700 bikes a day, and workers joke that the company’s acronym should stand for Berlin Motorcycle Works. Factory tours cost 8 euros. A tour of the Ducati plant and museum on the outskirts of Bologna costs 10 euros. Both require reservations.

Ducati celebrates its 90th anniversary at its biannual World Ducati Week at the Misano race track on the Adriatic coast from July 1 to 3. The annual BMW Motorrad Days in Garmisch-Patenkirchen near the Austrian border is scheduled for the same dates. At last year’s event, outfitter Marmot offered tent rentals for 25 euros, with an option to buy at the end for a third off the 300-euro list price.

The low police profile on roads may suggest little enforcement of speed limits. But traffic cameras are everywhere, as I was reminded several weeks after my trip when I got a ticket in the mail for going 109 kph in a 90 kph zone in northern Spain. One bright spot: As a nonresident, my fine was discounted to half of the 100-euro ticket.