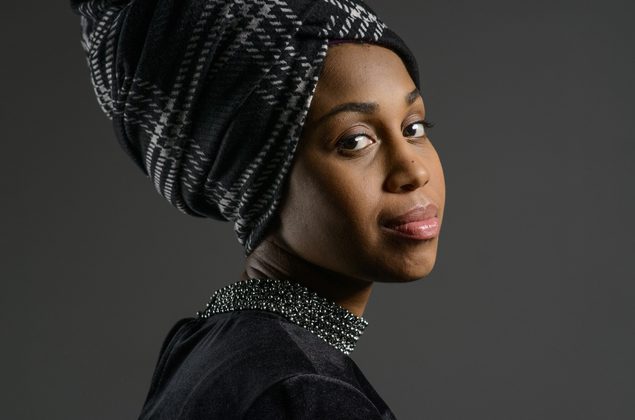 NEW YORK—Naming your daughter Jazzmeia is a bit like Babe Ruth pointing to the outfield fence before hitting a home run. After all, how could parents know their daughter would even like jazz, much less perform it? In this case, the name was chosen by her grandmother, a jazz-loving pianist. And, like the Sultan of Swat, the Horn family hit a home run.

At Jazz Standard, the 26-year-old Horn demonstrated that she could match the vocal flights on “A Social Call” in a live performance. Although she was raised in Dallas, Texas, her stage attire could be described as haute couture African. Indeed, her message of black pride comes through repeatedly in her shows.

The set started 10 minutes late, and the singer explained that she had just been in a car accident. Although she seemed a bit shaken, once she started singing she was as ebullient as ever. Horn was accompanied by a fine quartet: Victor Gould on piano, Marcus Miller on saxophone, Henry Conerway III on drums, and Barry Stephenson on bass.

They began with the opening track of the album, a blithe version of “Tight” (a song written and frequently performed by Betty Carter, who is an influence on Horn’s singing, as is Sarah Vaughan). In the middle of the piece, she started her virtuosic scatting, trading phrases with the saxophonist.

The singer has a multi-octave voice and flawless intonation. Both came through in her rendition of Rodgers and Hart’s “I Didn’t Know What Time It Was,” which began introspectively, with just the singer and bass, and picked up with the return of the saxophonist.

Horn highlighted her originality with her own swinging arrangement of “I Remember You.” She followed this with a ballad she wrote and explained to the audience that it was inspired by an unpleasant experience with a stalker, which occurred while she was in college. This was the most restrained number in the set, and Gould contributed a graceful piano solo.

Horn’s social conscience came to the fore in the Stylistics’s “People Make the World Go Round,” which began with a spoken word introductory litany of societal ills, from racism to pollution.

Horn and Gould joined for the jazz standard, “The Peacocks,” with music by Jimmy Rowles and lyrics by Norma Winstone.

The inspirational “Lift Every Voice and Sing” was followed by the bluesy “Moanin.”

While most of the set was comprised of songs from “A Social Call,” it all sounded fresh because of the singer’s improvisational flair and dazzling scatting. Horn has a fabulous voice and doesn’t hold back. Watching her live show, it’s understandable that she is touted as the most exciting jazz vocalist to appear on the scene since Cecile McLorin Salvant.