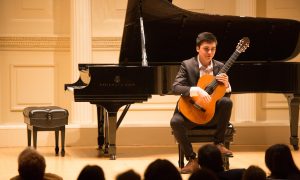 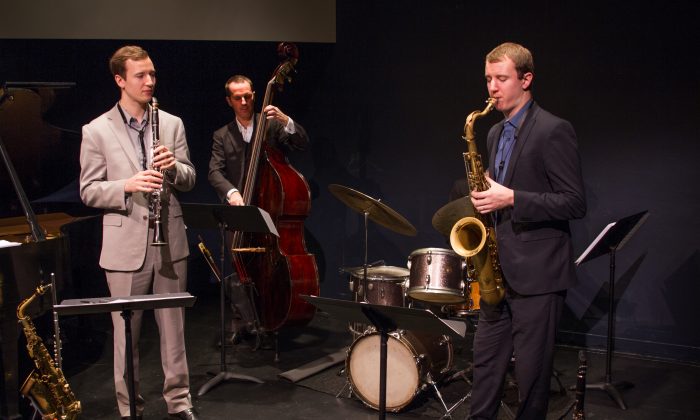 The creatively crafted show, perfectly packaged for everyone in town for the holidays, is playing until Jan. 3, 2016, at the cool, cozy space of 59E59 Theaters.

Drawn from the Duke and Count’s collaborative 1961 album, featuring music of both their big bands, the twins have created a show with a splash of fun facts. Rare film footage, from conversations and movies from that era, brings the audience up close and personal.

The twins set up a comfortable rapport before they dish up a sumptuous feast of big band swing—a style the brothers have been making their own since they were 8 years old.  It was then that they first got hooked on the big band sound, after listening to the tunes of Basie and Ellington.

Moved by the music magic of these humble giants, Peter, who plays tenor sax and Will, alto sax, often begin in unison and then trade their virtuosic finesse back and forth in such Basie tunes as “Blues in Hoss’ Flat,”  “Lil Darlin, “Tickle Toe,” “Corner Pocket,” as well as in the Ellington tunes of “Main Stem,” “Battle Royal,” and “Take the ‘A’ Train.”

When the saxes aren’t paired up, they are featured: Will’s memorable alto  in “Blood Count,” and Peter’s dazzling clarinet in a “Single Petal of a Rose.”

We also can hear how the distinct styles of Basie and Ellington bands really made an impression on these Juilliard grads when the twins play some of their own tunes.

The twins set up a comfortable rapport before they dish up a sumptuous feast of big band swing.

Supporting the Andersons are the virtuoso jazz musicians: Jeb Patton, on piano; Clovis Nicolas on bass; and Phil Stewart, on the drum set.  The Anderson quintet members all shine individually as well as an ensemble, handing off center stage solos, and showing why they are stars in both the local and international jazz world.

The twins also change up their offerings with other instruments, clarinets with “Mood Indigo,” as well as in a seasonal lollipop—a movement from the famous Strayhorn/Ellington collaborative interpretation of Tchaikovsky’s “Nutcracker Suite.”

To hear their virtuosity, catch the twins here, or featured at a previous concert.

‘Tis the Season for Centennials

It’s easy to imagine the twins, who by now have performed for almost two decades together daily, surely think of each other as Ellington did of Strayhorn:  “Billy Strayhorn was my right arm, my left arm, all the eyes in the back of my head, my brainwaves in his head, and his in mine.”

But this is not the only centennial event given a nod. Cartoonist Al Hirschfeld, who lived to be 100, was a pianist himself and jazz-lover. His inimitable drawings of the musical legends Basie and Ellington framed the set for the show.

Julie Jordan is the artistic director/founder of the New York Concerti Sinfonietta.