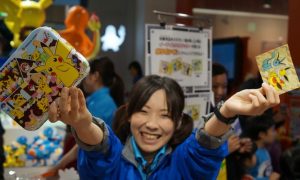 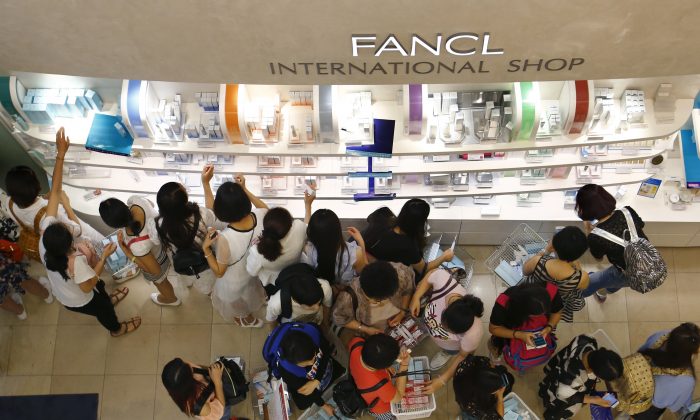 TOKYO—From the slopes of Mount Fuji to the temple streets of Kyoto, tourists are cramming Japan’s prime sightseeing spots, puzzling their way through Tokyo subways and splashing out cash on cosmetics, sushi, and high-tech toilet seats.

The cheap yen, easier visas, and other initiatives are luring foreign travelers eager to stretch their budgets and see some UNESCO World Heritage sites, bringing in welcome cash as well as myriad complications.

Tourism was among many Japanese industries that limped through more than 20 years of sluggish economic growth as locals tightened their belts and most foreigners stayed away, scared off by tales of $200 melons and other scandalous prices.

But Japan has become a hot destination as the exchange rate weakened from about 80 yen to the U.S. dollar in late 2012 to its current level of about 123 yen. Foreign visitors exceeded 10 million for the first time in 2013 and rose to 13.4 million last year. The aim is to have 20 million by 2020, when Tokyo will host the Olympic Games.

Prime Minister Shinzo Abe has jumped on the bandwagon with “Cool Japan” and “Omotenashi,” or Japanese-style hospitality, national branding campaigns that capitalize on products and concepts considered uniquely Japanese, such as “anime” cartoons and traditional “washoku” cuisine.

The efforts seem to be paying off: In April as the cherry blossoms coincided with Easter and Asian holidays, a record 1.7 million foreign tourists visited. In May, tourists overall doubled to 1.6 million, with big increases from China, Hong Kong, and South Korea.

With the yen at its weakest in decades, “It’s pretty good value for us at the moment,” said Grant Lutwyche, an Australian car mechanic who was visiting Tokyo’s Asakusa temple district with his wife.

The boom offers new business opportunities but brings challenges. Investment in infrastructure has lagged, and many working in the services industry are unused to dealing with foreigners, including the hundreds of mostly Chinese cramming into the elegant Ginza flagship shop of cosmetics and skin care company Fancl.

“We need more staff who can speak foreign languages, especially Chinese,” said Noriko Fukazawa, director of Fancl Ginza Square. Staff are learning one phrase of Chinese and one of English a day, she said. Wednesday’s phrase: “Please put your bags over here,” in Chinese.

As a rainy afternoon wore on, dozens of potential Fancl customers took one look at the long line for the duty-free counter inside and walked away.

“We’re just holding the bags,” said Yao Shanding, waiting for his wife outside with 19-year-old son, Jiayi. Yao wasn’t exactly sure what, apart from shopping, was on the agenda on the family trip from their home near Shanghai, Jiayi’s reward for finishing rigorous high-school exams.

But Yao was happy with what he had seen so far on his first day in town.

Visits by Chinese slowed after the 2011 nuclear disaster and a 2012 revival of tensions between Tokyo and Beijing. After exploring South Korea, Taiwan, Thailand, and Bali, many affluent Chinese travelers are making up for lost time, said Shaun Rein, Shanghai-based managing director of market intelligence firm CMR.

To lure more big spenders, Japan has slashed sales taxes on a wider range of items favored by foreign tourists and is setting up duty-free counters at hundreds of shops in Tokyo and elsewhere.

To lure more big spenders, Japan has slashed sales taxes on a wider range of items favored by foreign tourists and is setting up duty-free counters at hundreds of shops in Tokyo and elsewhere, even in drug stores—medicines and supplements are big sellers among Chinese and Russian tourists.

Ultra high-tech, detachable toilet seats with automatic lighting and lid opening and closing, that warm, wash and dry are another big must-have among Chinese, even though the products are made-in-China for export to Japan.

“The new status symbol in China is buying things and having experiences,” said Rein. “It’s not just buying a Louis Vuitton bag but how you bought it and how you did something cool.”

Since globally, tourism and travel account for about 9.5 percent of GDP compared with just 2.2 percent in Japan, there should be ample room for growth. Japan expects spending by tourists to exceed 4 trillion yen ($32.4 billion) by 2020, up from 1.6 trillion yen last year, said Ichiro Takahashi, a Japan Tourism Agency official.

The country is stretching to accommodate that growth. Though Japan has some of the world’s snazziest train systems, investments in new restaurants and hotels have lagged. Ever greater numbers of tourists are cramming into aging facilities that once served a much smaller market.

The scarcity of moderately priced hotel rooms has created a niche opportunity for flophouses and capsule hotels that have been renovated and converted into backpacker hostels charging as little as 1,500 yen ($12) a night if reserved in advance.

Other headaches include a lack of ATMs that will take foreign bank cards and the reluctance of many hotels and other businesses to accept payment by foreign credit cards.

A scarcity of signs in foreign languages leaves many scratching their heads as they navigate labyrinthine subways.

Takahashi said the government was determined to fix those problems. Another aim is to get tourists off the beaten track, to regions largely ignored in the past both by foreigners and most Japanese.

“One thing that may help us rediscover the value of these locations is foreigners’ experiences of them,” he said.