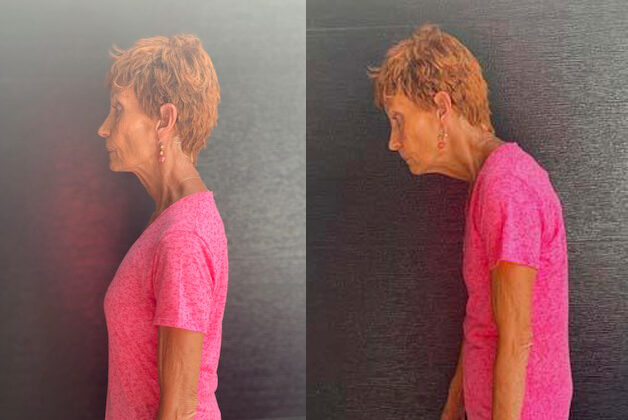 A Japanese study has found that the degree of spinal imbalance is strongly correlated with cognitive ability in the elderly. (Photo by Diane Serban)
News & Discoveries

When it comes to the harmful effects of stooped posture, people usually associate the condition with body shape and image. However, a new study has found that stooped posture is closely related to cognitive decline. A Japanese research team has shown that the degree of spinal imbalance is strongly correlated with cognitive ability in the elderly. The results of the study were published in May in Scientific Reports, an online journal from the publishers of Nature.

Shinshu University researchers recruited 411 participants, aged 50–89 years. The group included 202 men and 209 women. Study participants were divided into various age groups and were given cognitive assessments and simple mental status tests. The sagittal vertical axis (SVA)—the vertical alignment of the body—of participants was measured, with higher SVA values indicating more severe spinal deformity. In lay terms, the study examined whether participants stood up straight or not, and if not, to what degree their posture was stooped.

As people age, their centers of gravity tend to move forward, and it is common for the upper body to protrude forward with respect to the pelvis. This is called SVA anteriorization.  The researchers discovered that while SVA anteriorization usually becomes worse with older age, there is also a correlation between worsening spinal alignment and cognitive decline. In other words, stooped posture correlates to cognitive decline.

“In males, spinal balance anteriorization was associated with cognitive decline independently of age, with combinations of age and SVA also making valid cognitive decline determinations; male cases of SVA ≥ 100 mm at any age, SVA ≥ 90 mm at ≥ 70 years, and SVA ≥ 70 mm at ≥ 80 years were all more likely to have cognitive decline than cases below those values.

“For females, cognitive decline was more likely in cases of SVA ≥ 70 mm, regardless of age. Thus, spinal balance anteriorization can be regarded as an easily visible indicator of latent cognitive decline in community-dwelling older people.”

The researchers hypothesized that spinal imbalance not only indicates poor motor function, but is also indicative of reduced cognitive ability.

They noted that mild cognitive deterioration often goes unnoticed. The study offers the hope that cognitive decline may be identified by sagittal spinal balance assessment, using a radiological approach. Visible clues such as the anteriorization of spinal balance can help to more easily monitor for signs of cognitive impairment that could lead to dementia.

The researchers reminded the elderly to seek medical diagnosis when visible appearance changes in posture occur, so as to help prevent frailty and dementia.