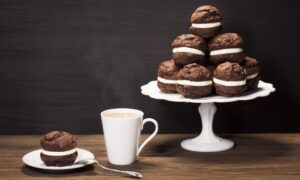 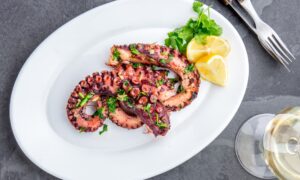 The Best Way to Cook Octopus, According to a Greek Chef
0 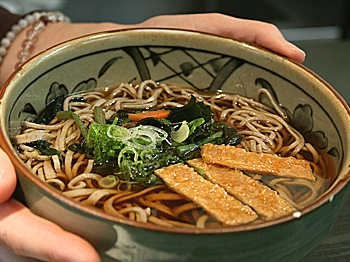 A bowl of Soba noodle soup is displayed at Katagiri on 59th and 2nd in Manhattan. (Genvieve Long/The Epoch Times)
Food & Dining

By Genevieve Belmaker
Print
Throughout my years of studying Japanese culture, nothing was as confusing as food. To an outsider, Japanese food can be a symphony of confusing—yet delicious—flavors, shapes, and smells. Not all of it suits the western palate. Some Japanese food can be downright frightening to the untrained mouth.

Take freshly cooked fish eyes, for example. Having witnessed the spectacle of a Japanese child plucking an eye from a whole cooked fish and gobbling it up like a piece of candy, I can attest to the fact that there are some mysteries of the orient that might be a stretch for outsiders to acclimate to.

But surviving in a foreign country is about more than getting past cultural barriers and language gaps. You have to find food you can handle eating, so that at least you don’t starve to death. Of the three times I have lived in Japan over the years, there were always days when I went to bed hungry.

Yet over time I discovered the solace of plain, good food that was somewhat familiar to my tongue, and thus lived to see another day. Noodles were literally a lifesaver. The relationship between Japanese people and noodles aptly displays their fascination with the minutia of cuisine. The variance in noodles is wide: ramen, soba, spaghetti, (yes, Japanese spaghetti is a delight!).

The ways to prepare them and places you can buy them is even wider. If you have the pleasure of eating a meal with Japanese people, no dish is as entertaining as noodles. I attribute that to the fact that it is polite in Japan to slurp your noodles. It takes many practice runs however, to get the art of slurping down pat, so that you’re not slopping broth and sauce all over yourself and others.

Of all the noodle options Japan has to offer, none is as simple or delightful to my taste buds as soba—buckwheat noodles. It’s the perfect summer food, whether served hot or cold.

In the island nation of Japan, the seasons still tend to dictate the food. Some dishes are fairly universal throughout the seasons, and soba is one of them. Japanese soba noodles can be served in a variety of ways, but most of the time its presentation is simple, clean, and light. For a quick meal, soba can be served cooked but chilled. The noodles are topped with light pieces of seaweed, and dipped in a dish of thin sauce called tsuyu. The tsuyu is diluted with water to taste, and then Japanese horseradish can be mixed in for a mildly spicy effect. Small vegetable dishes can be served on the side for extra sustenance.

If you want to make soba noodles at home, following are two recipes for your dining enjoyment.

Boil the soba noodles to taste. For chilled noodles, rinse in cold water and serve on a plate with the sauce on the side for dipping. Place vegetables on a separate plate, or mix with the noodles. For hot noodles, prepare a mixture of hot water and soba sauce to taste and add the noodles, vegetables, and tofu on the top.