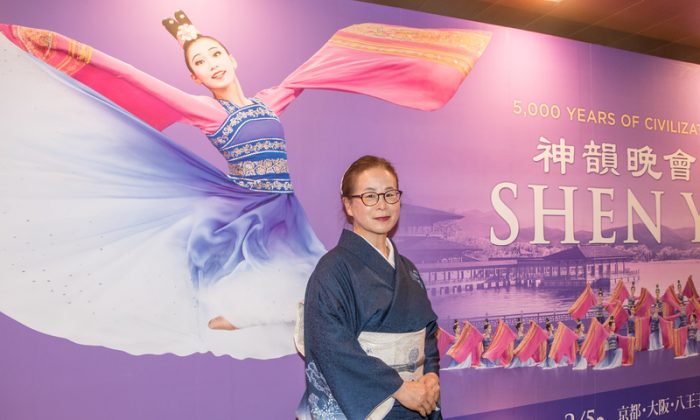 “The dance moves were so graceful. The dancers were light and floating. From their facial expressions to their fingers and then their feet, everything was rich in emotion,” Ms. Tanaka said.

Ms. Tanaka elaborated further about their dance moves. “These dancers did more than just showing different moves. In fact, these moves had become part of their bodies. Even the different props they used became [extensions] of their bodies.”

Founded in 2006, Shen Yun is a dance and music company with the mission to revive traditional Chinese culture through the arts. After more than a decade of global success with annual tours around the world, Shen Yun expands to six different companies this year. Shen Yun’s World Company kicked off the Asia leg of the 2019 world tour with its first performance at Kyoto on Jan. 16.

What amazed Ms. Tanaka about the dancers was the fact that they seemed to speak to her while they were dancing on the stage.

She explained: “I could hear a voice [from every single gesture]. It was a voice coming from their soul. It was something that couldn’t be put into words.”

Together the gestures and voices inspired Ms. Tanaka. She said, “These artists passed on [to the audience] their compassionate thoughts in their dances. I feel like I should be just as compassionate like them.”

Aside from the dances, Ms. Tanaka said she also truly enjoyed the orchestral performance, which she praised as “having perfect coordination” between Chinese and Western instruments.

Shen Yun’s dance performance is accompanied by a one-of-a-kind orchestra, with a western orchestra serving as a foundation that helps to accentuate the sounds of the Chinese instruments, such as pipa and erhu, according to the Shen Yun’s official website.

Last but not the least, Ms. Tanaka said she got out so much from the performance put on by the soprano. She praised how the soprano, with a traditional singing technique, was able to sing with such pureness and emotion.

She added: “I feel like [the soprano’s singing] took me back in time to my cradle. I mean, my soul was cleansed. It was an experience I never had before.”

Shen Yun soloists sing in bel canto technique, a singing technique that was common in ancient Chinese theater and early European opera, according to Shen Yun’s official website. Nowadays, these vocalists are the only soloists who have mastered the technique at its true form.

“Today’s experience [with Shen Yun] was truly unbelievable,” Ms. Tanaka summarized. “I had moments of peace while seeing the performance.”

With reporting by NTD and Frank Fang.