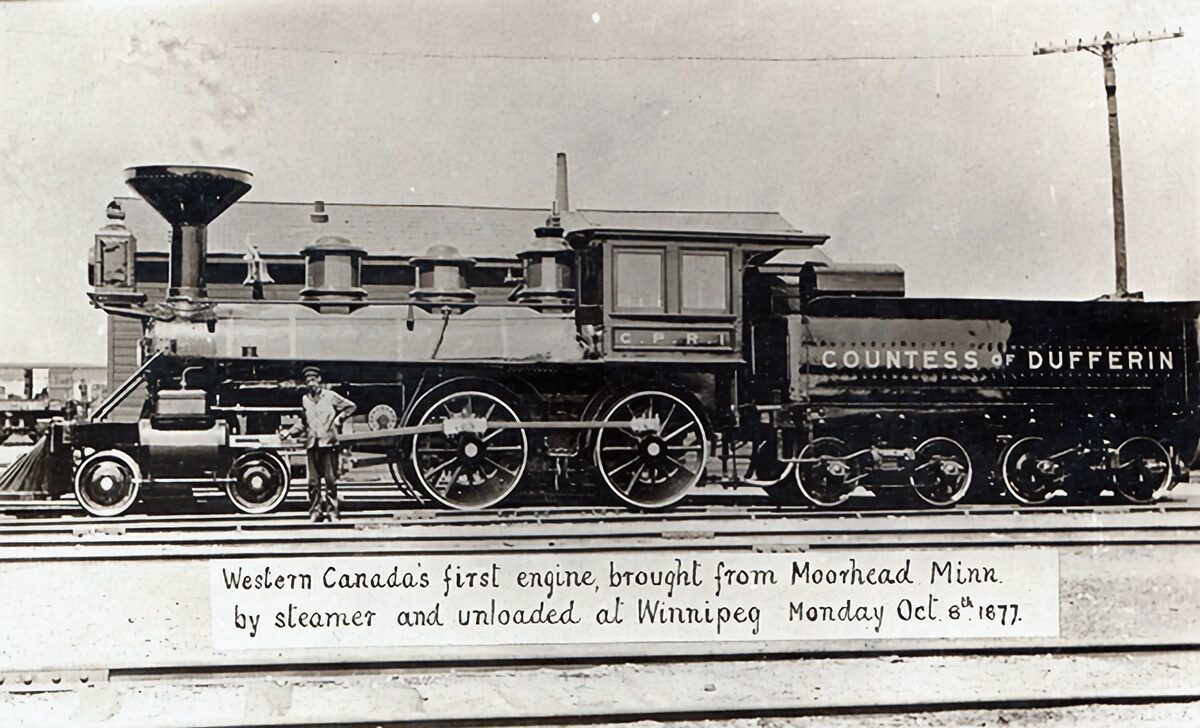 Of Irish heritage, James J. Hill grew up on the Canadian frontier. Despite the loss of vision in his right eye after a hunting accident at age 9, little “Jim” was a savvy fisherman and expert hunter, both with his handmade bow and his rifle. Raised by a Catholic mother and a Baptist father, Hill was educated by Quakers, under whose tutelage he mastered surveying and geometry at a young age. His great love, however, was reading, whether it was Walter Scott’s “Ivanhoe” or the great volumes of Shakespeare kept on the family bookshelf. These humble beginnings belied the fact that, one day, James J. Hill would be known far and wide by the sobriquet “The Empire-Builder” and live in the largest private residence—22 fireplaces, a two-story art gallery, 13 bathrooms, a hundred-foot-long reception hall—in the state of Minnesota.

When Hill was 14, his father died, and the teenager abruptly became his family’s primary earner. Working for a dollar a week as a clerk, he honed his mathematics skills and became acquainted with the world of commerce. As time passed, Hill became fascinated by the prospect of trade with Asia and determined to visit the Far East some day. First, though, he wanted to see the United States, and so, still in his mid-teens, he packed his bags and embarked upon a tour of America’s eastern seaboard, from New York all the way to Savannah, then inland to Chicago and, eventually, St. Paul.

Hill arrived a couple of years before Minnesota achieved statehood; St. Paul became its capital. Here, Hill quickly found work as a clerk and letter-writer for a steamboat company, then for several wholesale merchants. For the next seven years, James J. Hill learned the ins and outs of the freight business on the Mississippi and the Red River of the North. He also married Mary Mehegan, a union that would eventually produce 10 children, though only after Hill paid for Mary to go to finishing school.

By the 1870s, Hill had become an ambitious entrepreneur, known for soliciting feedback from clients and customers in order to identify areas of needed improvement. His warehouses protected the flour mills’ flour during the winter months, his freight terminals bustled with constant loading and unloading, his steamboats plied the Mississippi—powered by coal furnished by his own fuel company! All the while, Hill began exploring the possibility offered by railroads in the Old Northwest. Without railroads, commerce in these latitudes would forever be limited to those months when the rivers were passable, from spring into the fall.

Several major east–west rail routes had already been constructed—at great expense to the federal treasury. The prevailing attitude in Washington, D.C., was that such massive “internal improvements” could only be carried out with substantial help from the government. That help came in the form of subsidies, favorable loans, monopolies, and, especially, land grants to the tune of millions and millions of acres. But government involvement often incentivized shoddy design and construction practices, to say nothing of out-and-out corruption. Since the construction companies—owned by the railroads—were paid by the mile, they often laid a slew of extra track; more track meant more money, regardless of the route’s efficiency. Builders often overcharged for their services, then used cheap materials, like iron rails instead of steel rails, in order to pocket more in profits. In this way, the construction companies (and, by extension, the railroad companies who owned them) amassed great wealth before transporting a single passenger.

The central transcontinental route was completed first when the Union Pacific and Central Pacific lines met in Utah Territory in 1869. But in the early 1870s, scandal rocked the nation when The New York Sun revealed that the Union Pacific’s construction company, Crédit Mobilier of America, was vastly overcharging the government, then kicking back some of those gargantuan profits in the form of bribes to key government officials in order to keep the scam going. Those involved pocketed the equivalent of hundreds of millions in modern-day dollars.

In Hill’s own backyard, the same story seemed to be unfolding. The north–south St. Paul and Pacific Railroad, which had begun construction in 1857 and, like its bigger counterparts, had received millions of acres in land grants from the federal government, floundered. Builders cut corners and used cheap materials, and progress was slow. Within five years of its founding, and despite all of the government largesse, the railroad was already bankrupt. Things looked up when the Northern Pacific bought up the St. Paul and Pacific. The Northern Pacific, recipient of the largest land grant of all (around forty million acres), connected the Great Lakes to Seattle. But in 1873, the Northern Pacific went bankrupt, too. Chronic scandal and mismanagement thus plagued the railroads.

But Hill had a vision for the diminutive St. Paul and Pacific. After securing the backing of wealthy Canadian investors, Hill managed to purchase control of the railroad in 1878. He immediately began raising more money so that the railroad’s cheap iron rails could be replaced by more expensive, but higher quality, steel. Soon Hill’s railroad—now called the St. Paul, Minneapolis, and Manitoba Railway, or “the Manitoba” for short—connected St. Paul in the south to Winnipeg, Canada, in the north.

As it turned out, Hill was just getting started.

Next, Hill began construction of a rail line, the Canadian Pacific railway, connecting Winnipeg in the east to Canada’s Pacific coast. The city of Vancouver was largely the result of this effort. Throughout the 1880s, too, Hill expanded the Manitoba west across the far northern United States, facilitating settlement in the Dakotas, then in Montana. Now Hill’s line, which he renamed the Great Northern Railway in 1890, directly competed with the government-supported Northern Pacific. Confident in his own enterprise, Hill pressed west to the base of the Rocky Mountains. Braving blizzards and high mountain passes, Hill’s engineer (John Stevens, who would go on to design the Panama Canal) discovered a convenient route through the Rockies, and by 1893 the Great Northern finally stretched all the way to the West Coast. His was now the only transcontinental railroad in the United States that was privately funded.

Hill took personal interest in all of the territory adjacent to his beloved Great Northern. Rather than building quickly like his heavily subsidized competitors, Hill was careful to build with high-quality materials and along the most efficient route, minimizing elevation changes and curves. Unlike his competitors, too, Hill traveled back and forth along the proposed route, surveying, observing, checking and double-checking, and making changes in route plans when necessary. He supplemented the main line with a host of feeder lines, hoping to facilitate trade on as widespread a basis as possible.

His great desire was for his railroad to attract settlement—and with this in mind, he charged uniquely low rates to immigrant passengers. Since most of these settlers would be farmers, Hill developed experimental farms—at his own personal expense—to research the latest in agricultural methods, freely sharing his findings on grain strains and cattle-breeding with farmers all along the line. Sometimes, he even gave away his own cattle to new arrivals. His freight prices were likewise uniquely low—so low, in fact, that rival, government-supported lines tried to shut him down for making their own services uncompetitive! Despite his rock-bottom prices, Hill’s lines were so well run that they remained highly profitable, and his freight and passenger cars were almost always full.

Along the way, Hill helped develop the Pacific Northwest’s timber industry almost as soon as the railroad penetrated the region (the American timber industry was soon centered here). When fire burned down most of Fargo, North Dakota, Hill himself played a key role in the town’s rebuilding. His personal speeches—usually on the subject of agricultural innovation—were well attended in every county all along the line. In the meantime, Hill established a steam freighter business to carry trade from the Great Northern’s western terminus across the Pacific to the Japanese islands and China, thereby fulfilling a dream of his adolescence. From his papers and speeches, it is clear that Hill gained great satisfaction not just in making a profit, but in “progress,” in “real advance,” in “development.” He relished the opportunity to play his part. His Great Northern, especially, was a “Highway of Progress” (he used this phrase in the title of his own 1910 book). He wrote:

Nations, like men, are travelers. Each one of them moves, through history, toward what we call progress and a new life or toward decay and death. As it is the first concern of every man to know that he is achieving something, advancing in material wealth, industrial power, intellectual strength and moral purpose, so it is vital to a nation to know that its years are milestones along the way of progress.

Thriving When Other Railroads Went Under

When recession rocked the U.S. economy in 1893, many of Hill’s competitors—the Northern Pacific, the Union Pacific, the Santa Fe, all lavishly supported in a variety of ways by federal assistance—went bankrupt. His own workers, impacted by wage cuts, went on strike, but Hill met most of their demands and they returned to work. The Great Northern thus survived the “panic.” Working with investors and financiers (now including J.P. Morgan), Hill gained control of the Northern Pacific—despite a federal campaign to stop him—and, in short order, the railroad was running smoothly and profitably. Later, Hill acquired control of the Chicago, Burlington, and Quincy Railroad, too, which, by 1908, had expanded to Denver in the west and the Gulf of Mexico in the south.

“The wealth of the country, its capital, its credit, must be saved … above all from the predatory politician,” Hill said. No one could see he didn’t live these words himself. His secret, he insisted, was merely “work, hard work, intelligent work, and then more work.” Resisting the temptation to profit from the government weal, Hill had built a railroad empire unrivaled in American history. And, in the process, he fundamentally transformed much of the country.