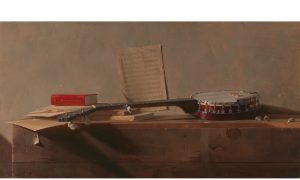 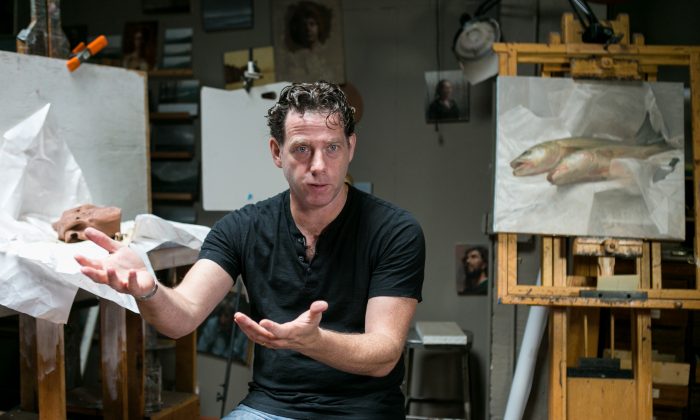 Jacob Collins, artist and founder of the Grand Central Academy, in his home on the Upper East Side of Manhattan on May 19, 2015. (Benjamin Chasteen/Epoch TImes)
Arts & Culture

This is part 2 of a 9-part series. To see the full series, see At the Confluence

NEW YORK—If you ask Jacob Collins about how photography changed painting, he’ll give you a long and methodical history lesson that begins with the Renaissance, weaves in and out of the ateliers, and ends with the present day.

Collins grew up in the 1970s, inexplicably drawn to Renaissance art, and felt a “tremendous sense of loss for the Renaissance arc,” Collins said at an April 3, 2014, talk he gave at the Dahesh Museum Gift Shop.

“[I was] outraged at its lack of continuity, even more so by the consistency at which I was discouraged from pursuing it.”

Collins studied art at a time when the modern art establishment held the reins, relegating representational artists to commercial careers in illustration, or simply to continue their craft in the shadows.

That sense of wanting to rediscover the academic tradition led Collins to eventually start the Water Street Atelier, which in 2006 became the foundation for Grand Central Academy, one of New York City’s premier realist art institutions.

At Grand Central Academy (which was recently renamed Grand Central Atelier), there are no classes on how to use photography. Sure, plenty of students enter admiring the work of painters who use photography, but they come to learn how to make realistic art with only their eyes and hands. It’s also an aesthetic decision.

The Aesthetic of the Camera

It is hard to pinpoint the exact visual differences between pre-photography and photography-influenced painting, but the differences in mood are easy to notice.

Look at Renaissance paintings and often you will run across this roiling, heightened passion, and the sense that the artist considered each square inch as a space for content—a secondary or tertiary figure as part of an allegory, or a tree that’s meant to be symbolic.

Then look at late 19th century paintings and the air is casual. The background is simplified, out of focus, subjects are singular. People often seem as if they are looking at the camera and posing for the camera, in a self-conscious, aloof way.

The aesthetic of photography—it’s hard to define. It’s an awkward humanism. There’s a coolness, flatness, and easiness to it.
— Jacob Collins

I had asked Collins for his thoughts on the photography issue, which he was more than glad to expound on. It’s a question that he’s been mulling over for years.

“The aesthetic of photography—it’s hard to define. It’s an awkward humanism. There’s a coolness, flatness, and easiness to it,” Collins said.

I met him at his home studio on the Upper East Side. He began his history lesson:

“Imagine a giant Venn diagram—with the old master tradition from 1420 to 1895, say. Then you have the world of the photographic image. Where these big loops overlap is in the 1870s to 1890s.”

These two decades were the heyday of artists who blended traditional content (biblical scenes, landscapes, portraits) and the new tool of photography, which in 1878 became more accessible through Eastman Kodak’s gelatin dry plate technology. Prior to that, a photographer had to haul around a box and tripod, wear a hood, and be trained to use a camera.

Photography became ever more prevalent. Today, people associate the photo with the authentic image, the most objective representation of physical reality. It’s also the type of image we are most familiar with, especially with the Internet.

“That’s why people who haven’t spent a lot of time in museums are more likely to like Zorn, Sargent, and Bouguereau than they are to like El Greco, Dürer, and Titian,” he said. “There’s something much more accessible about late 19th century realism.”

Of the realist art made today, the vast majority has photography in its genes, knowingly or unknowingly, whether in the aesthetic or in its creation process—so much so that the camera’s presence is an unspoken assumption for many art viewers.

If I’m worth appreciating, what I do and how I do it is going to be the avenue to appreciate me.
— Jacob Collins

This creates a difficult environment for Collins and artists like him who paint camera-less. It makes it especially necessary for them to explain their modes and motivations.

The Importance of How It’s Made

“I personally feel like how I paint is the story of the kind of artist that I am,” Collins said.

“If I’m worth appreciating, what I do and how I do it is going to be the avenue to appreciate me. In any field of connoisseurship, after the initial pass, it’s inevitable that the connoisseur wants to know: What are the tools, the practices, the self-imposed rules of the practice?”

Collins compares judging art without this knowledge to using the rules of basketball to judge a soccer match. It’s not that using photography makes a painting less worthy—Collins is sure on that point—but painting with and without cameras are entirely different games, and each ought to be judged on its own terms.

Anybody can judge a piece by his visceral reaction, but a connoisseur would be able to appreciate the ways in which artists solve nitty-gritty problems—how to overcome visual distortions of light, proportion, and color—painterly considerations that casual image-consumers cannot begin to conceive of.

But there’s an obstacle in the marketplace that blocks this level of discussion—art marketing. Over the years, the point of sale tipped over from artists to galleries, and so art patrons have been allowed to believe what they want about a work’s creation.

“For the purpose of marketing, it’s probably not a great idea [for a gallery] to tell the client that the painting is made from photographs, because the clients are often very eager to be supporting art that is traditional and that represents the virtuosic accomplishment of skill and talent combined,” Collins said.

The impulse among owners of realist galleries is understandable, even honorable, especially because realism had been so maligned by the modern art movements of the early 20th century. Realist artists too, in order to gain strength in numbers, banded together under the generalizing umbrella of “realism,” letting distinctions in style and philosophy be erased in the process.

The issue of photography has the potential of fracturing this hard-won, supposed unity.

“Like in politics, you have groups that come together which have nothing in common except that they are oppressed by the same enemy, so you get grand alliance,” Collins said. “There’s a lot of justice in that inspiration, but in that, you forget who you really are and you become defined by what you’re against.”

And as realism is again becoming favored by the world at large, there may be a lessening need for such a coalition. After all, artists’ desire to differentiate their creative endeavors from others’ cannot be muted forever.

Collins recognizes that his endeavor needs a name.

To call it “the group of artists who are trying to operate within this Renaissance arc without the use of photography” is clumsy and negative, Collins admits. It also doesn’t have much of a ring to it.

Collins’s central worry is this: If the authentic image in people’s minds is the photograph, what does that make non-photographic realism?

“Is there room in our culture for artists who are not interested in using photographs if that’s what they want to do? I want to support this idea that some group of artists can secede from the photographic sensibility.”

Drawing at the Grand Central Atelier

“We use a mixed bag of comparative measuring, structural analysis, tonal massing and shape finding. The one thing that has remained consistent, unique to GCA, is that artists are required to render in graphite as opposed to charcoal. Graphite can be rather laborious, but you are forced to be deliberate and intentional each time your pencil touches the paper. Mistakes are apparent and cannot be hidden by smearing or softening of the medium. You are describing an infinite number of moments on constantly changing planes of a surface.

“We spend a good deal of time studying how light falls onto form and the various visual phenomena that it creates. These careful considerations allow for a sensitivity to nature that is unique to drawing from life.”