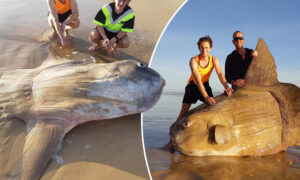 Rare 1.8-Meter Sunfish Washed Up on an Australian Beach: 'I Thought It Was Fake'
0 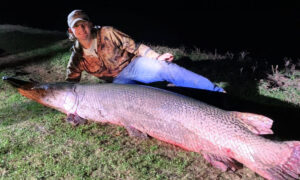 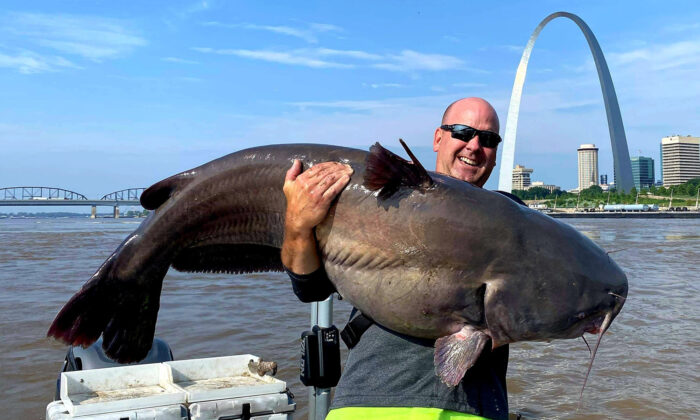 Angler Wade Kaminski, from St. Charles, Missouri, told a fellow fishing enthusiast that he was getting bites, but catches were far and few between recently.

Then over the July 4 weekend, Kaminski went out again and reeled in the biggest catfish of his life in the Mississippi River.

“I’m either snagged or I’ve got a monster,” the man recounted. It turned out to be an enormous fish so heavy that it maxed out his scale.

A photo tells the tale afterward with the proud fisherman hefting his trophy aboard his boat, the iconic St. Louis Arch in the background.

It was by far the largest catfish that Kaminski has ever caught, and that’s saying a lot considering he’s no beginner in that sport.

“Previous to catching the 112lb blue catfish my personal best was a 90lb blue caught on the Missouri river December of 2017,” he said. He’s also caught a number of 80-pounders (approx. 36 kg) over the years but nothing like this summer’s catch.

The massive fish dwell where the massive Mississippi and Missouri rivers converge near St. Louis, though the exact spot where Kaminski caught his personal best he is keeping a secret.

However, he revealed that he used chunk of cut skipjack fish as bait.

“We were drifting down the river, rod in hand, bumping bait along the bottom when I felt my hook go into something,” Kaminski explained. “A split second later the fish is pulling line off my reel effortlessly.”

Once the experienced angler realized that the force on the other end wasn’t a rock, he knew he had a very big one.

His first concern was whether the hook was secured firmly enough and if he could fight hard enough to reel in the giant. And it became clear the catfish wasn’t coming up without a struggle.

“During the 8-minute fight, neither my partner or I got to see the size of the fish,” he recalled.

Eventually, Kaminski pulled it to the surface; his fishing partner then netted and hauled the beast aboard.

“I quickly looked at the fish and knew it was substantially larger than any I’d ever seen in person,” said Kaminski.

After trying to weigh it on the boat’s scale, Kaminski and his partner realized the fish maxed out the 100-pound (approx. 45-kilogram) limit. After snapping some incredible photos with the giant fish, with St. Louis’s iconic skyline as a backdrop, Kaminski released it into the river.

The angler posted the photo on Facebook, where he assured concerned commenters that they “took very good care of the fish from catch to release.”

“Here is a picture of her reviving in the livewell,” he added, noting that his boat was well equipped, constantly pumping in fresh water and oxygen.

Kaminski’s 112-pound (approx. 51-kilogram) catfish fell short of a state record, however. The largest catfish caught in Missouri is a 130-pounder (approx. 59 kg), and a former world record, caught by Greg Bernal in 2010.

Kaminski’s catch has garnered major media attention, but he remains happy to simply be out on the water. He shared: “I find fishing a great escape from all the craziness that’s going on in the world today.”