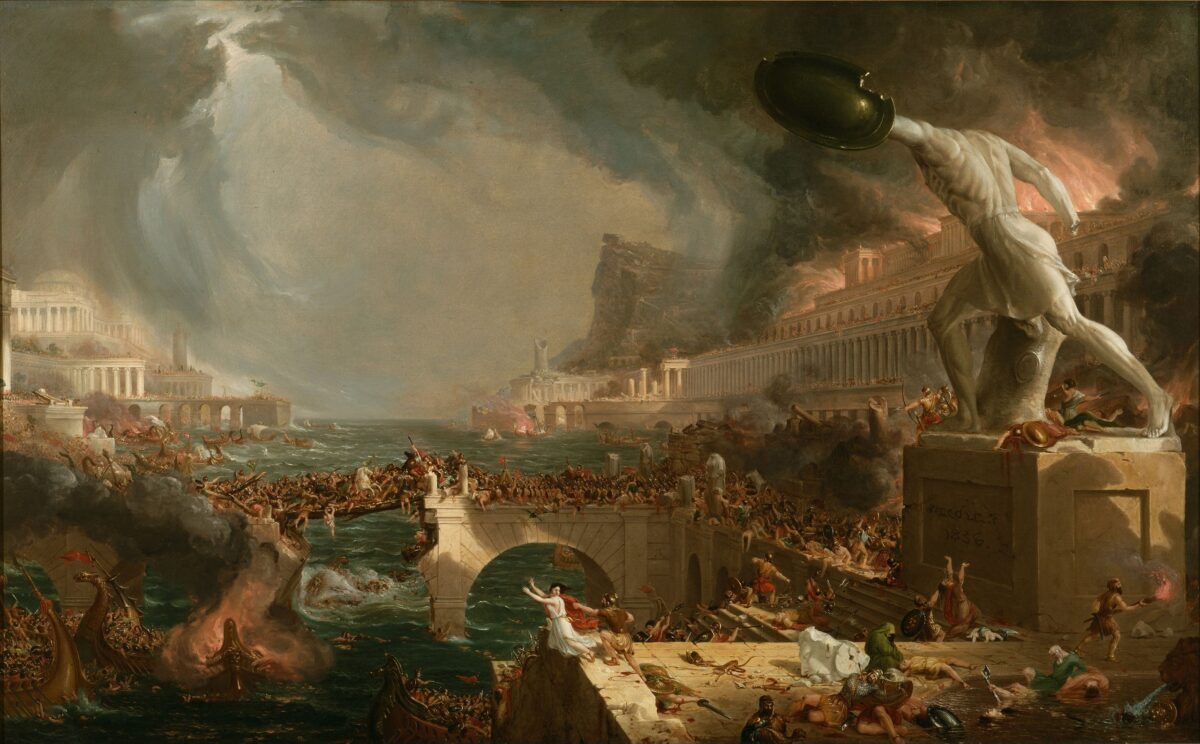 "Destruction" from "The Course of Empire" series (1836) by Thomas Cole. (Public domain)
Bright

We know the symptoms, we need solutions for our country
BY Dave Meyer TIMEJanuary 4, 2022 PRINT

We hear a lot of criticism and concern about how anti-American ideas and socialist principles have entered the mainstream political conversation. These are merely symptoms of a deeper problem. Our citizens have lost connection with this nation’s founding principles—who we were before we became a nation, why we fought for independence, how our founding documents paved the way for righting wrongs, and what we need to do to maintain freedom and opportunity.

The United States is a highly educated nation, although most are ignorant of our history and the principles that shaped our growth. American students went from ranking first in education to 30th in math, 8th in reading, and 11th in science, according to a recent report from the Program for International Student Assessment. In a way, many of our citizens are like those in Germany in the 1930s—well-schooled, but lacking true understanding.

My Lack of Knowledge

Like most people of my generation in the United States, I was grateful for the privilege of living here, but didn’t understand much about history. As a result, I didn’t realize the price that had been paid for the freedoms we enjoy, and I didn’t know about my responsibilities as a citizen.

As a young man, I joined the Army, between the time of the Korean War and the Vietnam War. But my decision was more pragmatic than patriotic. During that time, in the early 1960s, if you didn’t sign up, you’d almost certainly be drafted. My intention was to gain some practical career skills in the engineering field—specifically in the HVAC industry (heating, ventilation, and air conditioning)—and use what I learned to help my career.

Sports were a big part of my life, so I tried out for and made the basketball and baseball teams. Our games were considered very important for the morale of the troops, and they certainly boosted my morale. I was stationed in France and then Germany, and counted myself blessed to serve the United States in those developed nations. Although I appreciated my country, and served overseas, I took it for granted in many ways.

That’s not to say I took the men and women in our military for granted. I’ve always had the highest respect for those who serve our nation, and especially those who’ve sacrificed life and limb. If you’re a veteran, active service military, a family member of someone serving, or a member of law enforcement, thank you for your service!

After my service, through my professional career, and into the ministry that God called my wife, Joyce, and me to, I had the same basic view of the United States—until a friend sent me a gift that opened my eyes and changed my heart. It was a book on American history. I had no idea why anyone would send me a book on the subject, but once I began to read, I couldn’t put the book down. My heart was overwhelmed as I began to realize all the ways God shed his grace on our people, all the sacrifices our founders and leaders made, and how the sacrifices so many men and women made had been forgotten—or in most cases, never taught and never known.

But the effect of this new knowledge was more than intellectual; with every story I read, something stirred deep in my heart. As my eyes were opened to our past, I began to see where America was headed—and why. I realized that all the blessings of liberty could disappear in a heartbeat—and were already in the process of vanishing.

In writings from the 1700s, “The Decline and Fall of the Athenian Republic,” Sir Alexander Fraser Tytler, a history professor at The University of Edinburgh, is known to have listed the “Cycle of Nations.” If you know anything about America’s history, you’ll recognize the progression and regression of our nation in this sequence. You may also recognize what stage America presently occupies. The average age of the world’s greatest civilizations is 200 years, and they have all passed through the following sequence:

“From bondage to spiritual faith.

From spiritual faith to great courage.

From great courage to liberty.

From liberty to abundance.”

“From abundance to selfishness.

From selfishness to complacency.

From complacency to apathy.

From apathy to dependency.

From dependency back into bondage.”

Our nation is one step from bondage as our dependency is shifting to government from God and self-reliance. How have we found ourselves in this condition? The answer is found in what happened between “abundance” and “selfishness.” We began to take our blessings for granted and were no longer thankful—and when we aren’t thankful, we stop being responsible.

The lack of remembrance of how our nation progressed from bondage to abundance can only be found in our true and accurate history. Without a thankful heart and a responsible attitude, neither America nor any other nation has the ability to remain great. And without knowledge of its history, no nation has the ability to be thankful and responsible.

This is how America is in the process of being destroyed. But it doesn’t don’t have to stay that way, if we will educate ourselves about our rights and responsibilities. Each right represents a portion of our freedom—for example, the right to freely worship, speak, and congregate, along with the right to a fair trial in a court of law, to name just a few. When even one God-given right is not maintained in our country, that portion of our freedom disappears.

Whose responsibility is it to maintain our rights? We the People of the United States of America.

But we can’t maintain our rights if we don’t know them, or are ignorant of what principles they’re based upon. Do you value your freedom? The proof is in how you take care of it.

History is our textbook, our compass, our guide. History defines our rights and reveals our responsibilities. History is a treasure of wisdom. History reveals the consequences of good and bad choices, which provides valuable wisdom.

Generally speaking, people under the age of 60 in the United States know little or nothing about their nation’s extraordinary godly heritage. Consequently, they are untrained, unequipped, and unqualified to fulfill their civic responsibility. As a result, they are unknowingly forfeiting their rights and authority—and therefore their freedom.

What can we do to be a part of the solution today? First and foremost, educate yourself and your family on our nation’s true history. Don’t skip this crucial component. What you think you remember from school will not make the grade. Not sure where to start? I address this in my new book, “Freedom Is Costly, But Priceless,” available at JoyceMeyer.org/america.

Second, as you study our history and founding principles, pay attention to what areas interest you most. In some cases, this can mean discovering or reaffirming topics you’re passionate about. It might be education, local government, elections, or how your church can be a more positive presence in your community.

Finally, get involved in some small way. This might mean simply attending a school board meeting or emailing an elected official. But without a simple first step of action, nothing will change.

There are many local government officials who try to abide by our founding principles. The same goes for teachers and administrators who work hard to educate our children with truth and godly principles. But these people need our vocal support and actual service. As for those who are directly opposed to your stand on issues, most will respect informed and polite debate on matters of interest.

There is time to make a course correction. We must be patient, persistent, and bold—and operate with love toward all our fellow citizens.

Dave Meyer
Follow
Dave Meyer is the vice president of Joyce Meyer Ministries, and author of the new book "Freedom Is Costly, But Priceless." A veteran of the U.S. Army, he is passionate about America’s heritage. He has been married to Joyce for over 50 years. They have four grown children, twelve grandchildren, and two great-grandchildren.
SHARE
Friends Read FreeCopyFacebookTweet
You May Also Like