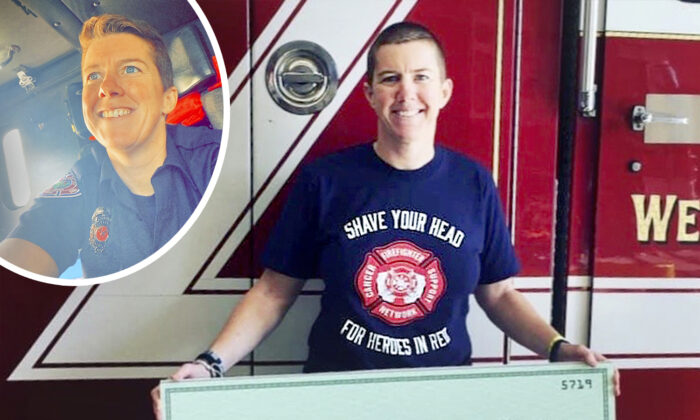 ‘It’s the Best Day of My Life’: MA. Firefighter Finally Returns to Work After Beating Cancer

Wellesley, Massachusetts, firefighter Joanie Cullinan returned to work after an 18-month fight against cancer, and she expressed how it felt to be back. “Amazing,” she said, talking to Boston 25 News. It’s the best day of my life so far. That’s for sure.”

Fellow firefighters and local law enforcement were on hand to welcome her back for her first 24-hour shift. Having undergone a grueling year of chemotherapy, she then needed months of physiotherapy and strength training to get herself back into shape for the job she loves. After 18 months away, she finally returned to the station.

An 11-year veteran of the department, Cullinan, 37, was attending a Professional Firefighters conference in Massachusetts when she undertook a free skin test. That test revealed a small mole that later turned out to be a stage 3 malignant melanoma. Early detection, however, probably saved her life.

Though the risk of the cancer spreading was only 10 percent, it did spread to her lymph nodes. Cullinan said in jest that “I probably should have played the lottery that day.” She required surgery and chemotherapy followed by physiotherapy. “It was a tough year,” Cullinan commented. “I’m a fighter. I put my head down, and I got the job done. I smiled through it I laughed. I made the best of it.”

Her last day of treatment was in May. Fellow firefighters joined with friends and family to celebrate, organizing a surprise parade outside the fire station, which she video-recorded and posted on Facebook.

However, even having beaten cancer, she couldn’t return to work immediately. There was one final snag. Because of the pandemic, she had to isolate herself and await clearance before returning to work.

She added, “For me, the really hard part was the time between finishing treatment and getting back here. I wanted to shut the door to cancer, and I couldn’t do that until today, until I got back here.”

While Cullinan learns her department’s new procedures during the pandemic and settles back into her work, she decided to share her story. She highlights the importance of early cancer detection and using community spirit to overcome struggle.

“I’m a firefighter, I’m a helper by nature. I want to help people,” she said. “If I can prevent anyone from going through what I went through, then it makes it worthwhile.”