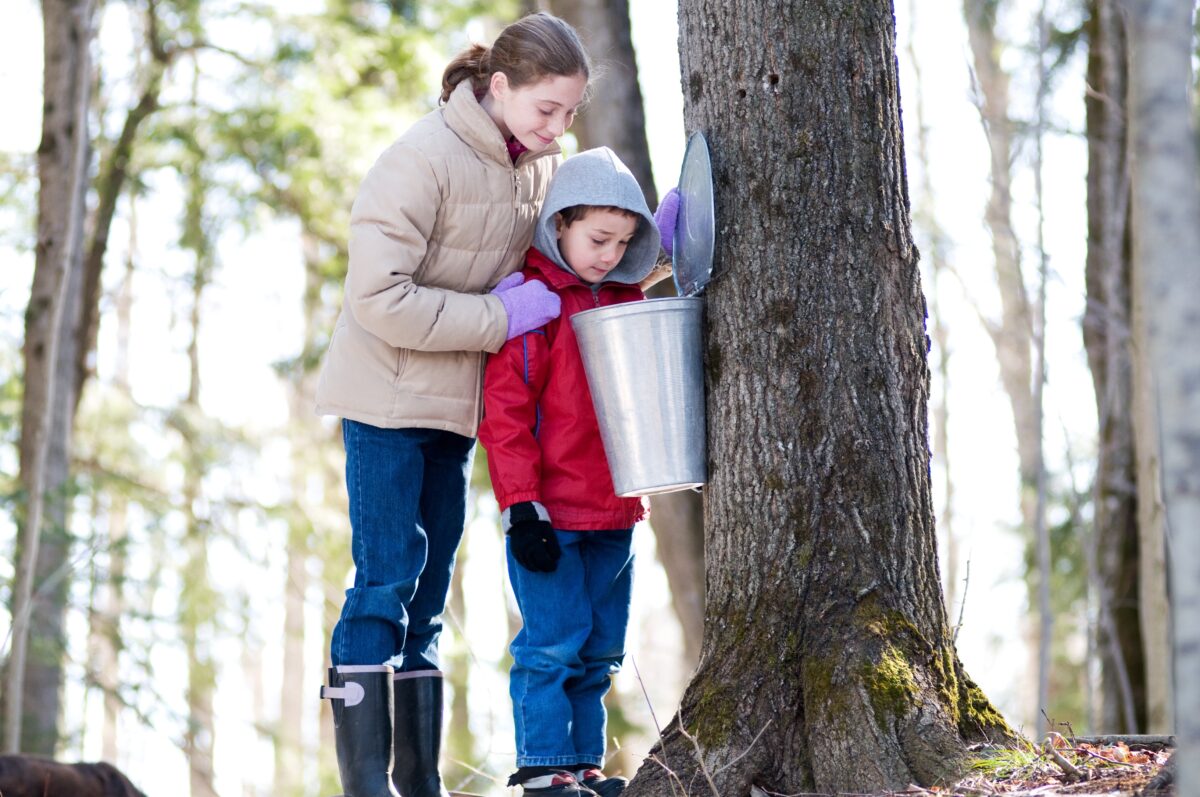 Learning how maple syrup is made is a fun activity for the family. (sianc/Shutterstock)
Home

It’s Maple Syrup Season! How to Tap and Boil Your Own

A sure sign of spring is the sight of maple syrup buckets on the sides of sugar maple trees. Early settlers found that Native Americans slashed trees to collect the sap. The sap was gathered into hollowed-out logs. Freezing temperatures caused ice to form, which was removed as pure water, thus concentrating the sap. Hot rocks were also placed in the log to evaporate more water out of the sap.

The sap in a sugar maple is about 2 percent sugar, which may be high for a tree but is very low for syrup. It takes around 40 gallons of maple sap to produce a single gallon of syrup. All maple species, including silver, red, and Norway maples and even box elder trees (they are a type of maple), can be used for syrup making. Other tree species can also be used, but huge amounts of sap need to be gathered from them, and many may have tannins and other chemicals that ruin the flavor. Do your research before tapping your oak or hickory tree.

To get enough sap, you need to start with a large, healthy tree. It should be at least a foot in diameter. The taps that are drilled into the tree are placed about three feet off the ground and about a foot apart around the tree. The sap flows best on the sunny side of a tree on sunny days. Sap flow is created when the sap in the tree freezes and thaws, creating pressure from gas expansion and contraction within the sap. Daytime temperatures in the 40s and nighttime temperatures in the 20s produce the best flow. Long periods of high or low stable temperatures inhibit flow. The sap does not flow just because it’s spring and the tree is going to produce new leaves.

The sugar in maple sap is produced the previous summer during photosynthesis as carbohydrates are stored in the tree as starch. During the winter, the starch is broken down into sucrose. The amount of sugar in the sap depends on the tree’s genetics and health as well as the soil moisture and growing conditions during the previous season.

The hole that is tapped into the tree will be about 2 inches long and about a half-inch in diameter depending on the type of spout that is used. The hole should slant upward so the sap runs out. The drill bit should be sterilized before use and if rotten wood is encountered, resterilized before being used again.

The spout is called the spile and it serves to transfer sap from the tap hole to the bucket or the transfer tubing. It also often provides the hanger for the bucket. Lastly, it seals the hole to prevent contamination of the hole and the sap. The spile should be sterilized before use. It’s removed from the tree as soon as the sap running season is over. The hole on a healthy tree will close in one to three years. Future holes should be drilled at least six inches away and several inches higher on the trunk to prevent girdling the tree.

The collection bucket can be metal or plastic, but should include a lid to keep out dirt, bugs, and most importantly, rain. Rainwater will dilute the sap even more, making it much harder to make the syrup.

Once the sap is collected, the excess water needs to be evaporated away. A large flat pan allows for more surface area and faster evaporation. Boiling the water away takes a lot of energy. Syrup with a high concentration of sugar will boil at a higher temperature than plain water. Finished syrup will boil at around 220 degrees Fahrenheit. Everyone knows that water boils at 212 degrees, but what many people don’t realize is that this temperature is dependent on a barometric pressure of 29.92 inches of mercury. The syrup will burn if it is too hot, so the good maple syrup maker will be boiling pure water next to the syrup to determine the correct boiling temperature of water at that time and location to make sure the syrup doesn’t burn and yet still gets to the proper concentration.

Back in the days before cane sugar became easily available, maple sugar and syrup were valued commodities. Now, corn syrup with artificial flavoring is often sold as maple syrup, so if you get the chance to eat real maple syrup, sugar, or candy, don’t pass up the chance for a real tasty treat.