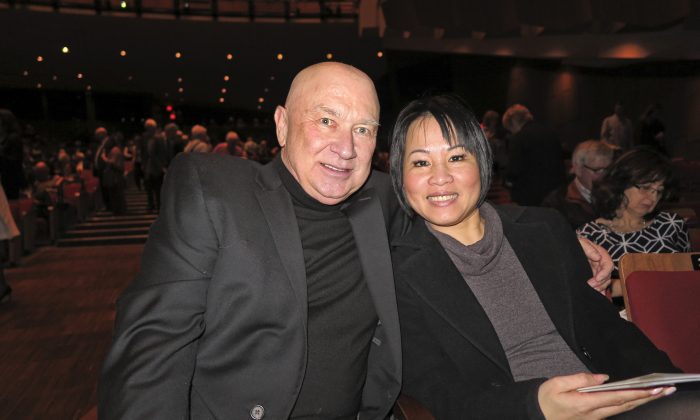 VANCOUVER, Canada—James Miller and his wife thought it was providence that brought them to the Queen Elizabeth Theatre to see Shen Yun on March 24. They bought their tickets only hours before the matinee performance and managed to get front row seats.

“I think something is actually meant to be,” Miller said.

The vice president in sales and marketing had seen the advertisements for Shen Yun Performing Arts for several years and had always wanted to go. But Miller’s busy schedule never afforded him and his wife an opportunity to experience the traditional dance and music performance.

This all changed this year after a recent business trip to China.

“I have a friend in China that I’ve worked with him for years and he highly recommended it. I was over [in China] and I saw him in January. I said the show is back in Vancouver, and he said you have to go and see it yourself,” he said.

Miller decided to heed his friend’s advice and was pleasantly surprised by what he experienced.

“It’s very beautiful! I love the costumes, the colors. I think it’s a beautiful story. It’s very interesting,” Miller said, adding that the front row seats provided him with a unique perspective.

“Actually, it’s exciting to be able to see it so close up because you can see the performers’ faces and they seem very passionate about what they’re doing,” he said.

New York-based Shen Yun is currently touring the world with a mission to revive China’s 5,000 years of semi-divine culture that was lost after seven decades of communist rule. Through about 20 vignettes of dance, stories, and music, audience members are able to get a glimpse into ancient Chinese civilization and learn about the beliefs, traditions, and customs.

Miller thinks it’s important for people to preserve their cultures and share them with the world for everyone to learn about.

“People should keep their cultures as much as possible. I spent a lot of time in China myself, and I think it’s a beautiful culture and the traditions are very meaningful,” Miller said. “I think we can learn things from all cultures. And for me, it’s very interesting to know about other cultures—it makes us closer, globally.”

Miller said he was particularly impressed by the live orchestra that blends Chinese and Western instruments to create a distinct yet harmonious sound. He was touched by the melodic notes coming from the Chinese instruments such as the erhu.

“I also love that the music is live because the music, for me, is part of the whole story. I feel very moved by the music as well as the dancing,” he said.

“There were parts where you fall into the scene a little bit. Where the people start dancing, it gets a little bit almost acrobatic. There was a lot of physicality in dancing. So it’s a combination,” he said, adding that the dancing was “very beautiful [and] very mesmerizing.”

Miller was also intrigued by the performers themselves.

According to the Shen Yun website, many of the performers practice the spiritual discipline Falun Dafa, also known as Falun Gong, and follow its tenets of “Truthfulness, Compassion, and Tolerance.”

For the performers, practicing Falun Dafa is a state of mind that guides their daily life, is oriented toward self-betterment, taking responsibility, and putting others first, according to Shen Yun. By incorporating these principles into their work and the production, the performers attempt to inspire audience members to reflect about themselves, and the world around them.