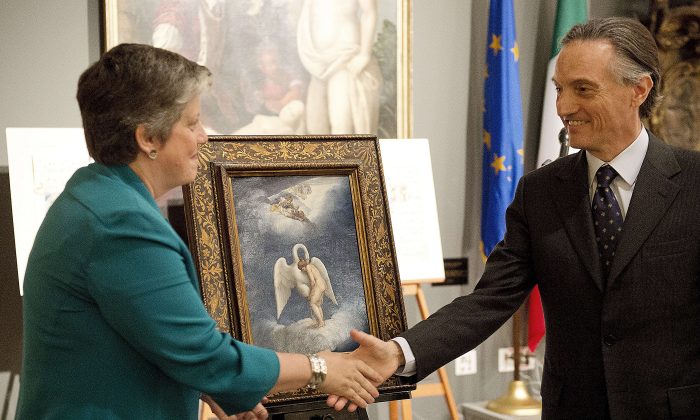 U.S. Secretary of Homeland Security Janet Napolitano and Italian Ambassador to the U.S. Claudio Bisogniero unveil a Renaissance painting by Lelio Orsi called "Leda and the Swan" during a repatriation ceremony in Washington DC on April 26, 2012. (Jim Watson/AFP/Getty Images)
Europe

Italian Government Cracks Down on Trafficking of Precious Historical Artifacts

The Italian government aims to crack down on the theft and trafficking of historical artifacts as it seeks to fulfill its campaign promise of bolstering national identity.

Culture Minister Alberto Bonisoli said the government will soon ratify the Nicosia convention, an international agreement that’s concerned with combating the illicit trafficking and destruction of cultural artifacts. Bonisoli made the announcement at an event in Washington to celebrate the return to Italy of three ancient treasures.

They were a wine carafe, a decanter for precious oils, and a soup tureen dating back to ancient Greece, all of which had been illegally taken from an archaeological site and exported to the United States.

“We want to introduce laws on specific crimes so there are stiffer penalties applied to crimes against cultural heritage, which is a fundamental part of our identity,” Bonisoli said at the event, according to The Telegraph.

The government of the Five Star Movement (5SM) and the League party came to power on a message of “Italians first.”

The artifacts were discovered by detectives from the Carabinieri, Italian police’s paramilitary force, who were scanning online auctions and saw them being sold by a New York auction house. They then contacted the FBI.

The carafe, tureen, and vase were among 16 precious historical items recovered from the United States and returned to Italy. Over the past 15 years, U.S. and Italian law enforcement agencies have collaborated to successfully return 200 treasures and priceless works of art.

“Today, the commercialization of online platforms for rapidly selling art and archaeological objects allows our investigators to see these objects abroad on a daily basis,” Gen. Fabrizio Parrulli, the head of the Carabinieri art crime unit, told The Telegraph.

“Thanks to our collaborators at the Met Police and the FBI, we are developing a diplomatic culture of restitution that involves actually bringing the works back to their place of origin.”

The Nicosia convention was drafted by Cyprus to solidify penalties for offenses such as unlawful excavation, importation, and exportation; illegal acquisition; and sale of cultural artifacts. It also criminalizes the falsification of documents and the intentional destruction or damage of cultural property.

The agreement has been signed by Mexico, Portugal, Greece, and Armenia. Italy is expected to ratify it in the next few months, Bonisoli said, with the draft law introducing stiffer penalties for crimes against cultural heritage.

Other works that have been recovered include a rare 16th-century painting by Lelio Orsi called “Leda and the Swan,” a 2nd-century bronze of the god Mars, as well as frescoes from the ancient Roman city of Pompeii.

One mosaic floor that was originally in a ship built by Roman emperor Caligula 2000 years ago was discovered being used as a coffee table by an antique dealer on Park Avenue in New York.

“These recovered works tell the story of our obligation to spare no effort in our collaboration to ensure our past survives for our kids and our grandchildren,” said Armando Varricchio, Italian ambassador to the United States, reported The Telegraph.

There are initiatives around the world to return looted artifacts to their places of origin.

In August, 5,000-year-old objects that had been taken from Iraq following the fall of Saddam Hussein were returned by the UK after being identified by the British Museum. The objects had been seized from a London-based dealer in 2003 and spent 15 years in police storage.

In April, Ethiopia demanded that Britain returns artifacts that are being held by the Victoria and Albert Museum. The V&A responded by suggesting the pieces could be loaned back to the African country.