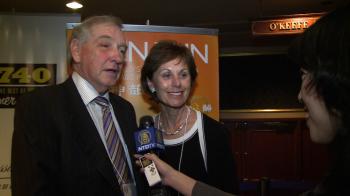 ‘It is the most wonderful evening we have ever seen’: Museum Governor and Former Minister

By Cindy Chan
Print
TORONTO—Friday night’s Shen Yun Perfoming Arts show at the Canon Theatre was the first time Gordon and Harriet Walker have seen a Chinese cultural show and they were thrilled by the performances.

“We had no idea that it was going to be so lively. The tremendous ability to dance and the beautiful costumes and the music—it is the most wonderful evening we have ever seen,” said Mrs. Walker, president of Harriet Walker and Associates of Toronto and governor of the Royal Ontario Museum since 2003.

Mrs. Walker was also a runner-up to Miss Canada nationally in 1965. Mr. Walker is a businessman; lawyer; a former alderman in the city of London, Ontario; and a former cabinet minister in the Ontario provincial government.

“The artistry is magnificent. It is amazing,” said Mr. Walker, adding that “the music of course is superb. The tenor and the soprano were magnificent in their performance. The pianist is a delight to watch and to hear.”

New York-based Shen Yun Performing Arts is the world’s premier classical Chinese dance and music company whose mission is to revive the authentic 5,000-year-old artistic traditions of China. The non-profit company was formed by a collaboration of leading artists who endeavour to breathe new life into traditional Chinese culture through excellence in music and dance.

Watching the dancers reminded Mrs. Walker of the amount of training and discipline required to perform at such a high calibre.

“The dancing is spectacular,” she said. “I myself used to figure skate, so I appreciate the hours and years of training they must do to be able to do this wonderful dancing. The athleticism and leaping in the air always looking so relaxed as if it is easy; it’s outstanding.”

Shen Yun also features state-of-the-art digital backdrops that are often animated to seamlessly interact with the costumes, storyline, choreography, and musical accompaniment of the performances.

“We did notice the backdrop, it was … constantly mobile,” said Mr. Walker, noting that this was the first time he had seen background scenery produced in this fashion. “All of it is very interesting and exciting, a very interesting form of artistry in itself.”

Asked what three words she would use to describe the show, Mrs. Walker said, “thrilling, outstanding, and very worthwhile to see.”

She said she would be sure to return.

Shen Yun will perform three more shows at the Canon Theatre: two on Saturday at 2:00 p.m. and 7:30 p.m., and a matinee on Sunday at 2:00 p.m. For more information, please visit www.shenyunperformingarts.org .