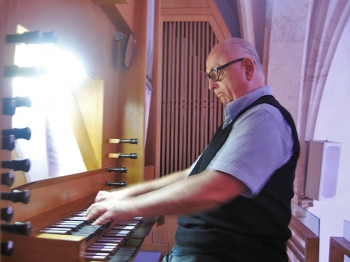 EXPANDING SOUNDS: When Juan Onassis, a famous Israeli painter and musician, plays the church organ, it seems as if he is about to take off into the air. (Maya Mizrachi/The Epoch Times)
Arts & Culture

Juan Onassis, famous painter and organist, is a modest, elegant, and graceful man. For the past 31 years, he has been the musical director and senior organist of the Immanuel Lutheran Church in the German-American Colony in Tel Aviv-Jaffo, Israel.

Onassis’s story is one of genius, suffering, faith, and love. It begins with a harsh childhood in a holocaust survivor family, a strict and cold education, and an accident that left him with limited movement ability. A large part of his body is insentient, which compels him to use two walking sticks.

Onassis is living proof of the mind’s superiority over the weaknesses of the body. He says, “What ails me is not what I do not have, but what others lack, which is appreciation of what they do have—they take it for granted.”

Onassis immigrated to Israel from Uruguay in 1969. For many years, he was a professional painter, and his résumé includes working for the Israeli Opera.

Between the years 1986 and 1989, he painted 14 frescos on the walls of the Municipal Conservatory in the city of Petah Tikva, Israel, where he then worked as a teacher. This building is currently marked for destruction, and the fate of those unique works of art has become the subject of a debate the results of which look hopeless at the moment. Moving the paintings to the conservatory’s new residence would be a complicated and costly endeavor.

Will this high-quality art become an artistic tragedy, or will somebody pick up the glove?

The early Renaissance-style frescos bring to mind Shakespearean plays, and some of the figures seem to have been inspired by famous opera roles, such as Mozart’s Papageno, in the “Magic Flute.” The painting technique shows great talent and skill.

Light glows and radiates from golden bells and from the soft faces of gentle figures somewhat remindful of Da Vinci’s madonnas. Their bare hands delicately play ancient musical instruments, and their bodies, fully covered by theatrical garments, remain a mystery. Musical notes in movement seem to be interwoven into the scenes.

Onassis said about his frescos: “The main painting is in fact a musical scale. The other paintings are also about music. I do not have a philosophy or a specific message that I was trying to convey, at least not consciously. Having received artistic education that was basically Italian, my style is influenced by the Italian style of ‘commedia dell’arte.’”

Onassis was born in northern Uruguay. He said about his childhood, “My first memories are of nature, the earth, the birds. I still love nature and am highly sensitive to it.

“I was a rather weird child, who did not speak, but had the awareness of an adult. At home they talked about my father’s family that perished in the holocaust. I hardly ever spoke. I absorbed all but never reacted. The transfer from life to death seemed obvious to me, as was the presence of a divine power, although my parents were liberals, and I never received any guidance or instruction on such matters.

“When I started going to school, I still didn’t speak. My worried parents went to talk to my teacher, who told them, ‘He does speak, only in a different way, through painting.’ And indeed, I was constantly painting. I remember being overwhelmed by impressions and emotions, and I absorbed everything, but it was never translated into speech. Painting and music were my means of communicating with the environment.

“I loved climbing fences and getting lost. I loved climbing trees and sit high above the ground for hours, watching the sky. Being there I could feel the heavenly presence. I was stunned to learn that others could not feel the same, and I asked myself, ‘How can they be so blind?’”