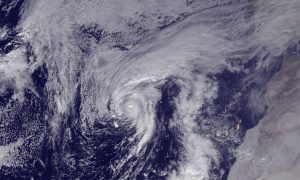 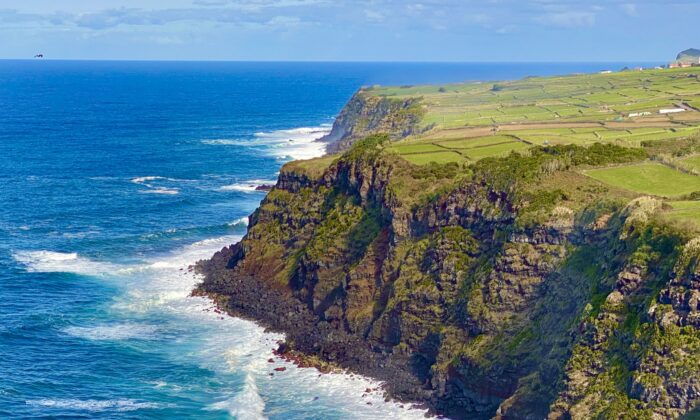 The rugged cliffs on the north shore of Terceira. (Tim Johnson)
Destinations

Islands of Serenity: Peaceful Travel on the Azores

Dial the clock back a couple thousand years, and this, where I’m standing, was a rather violent place. Churning lava and big explosions, unimaginable heat, the evidence of all that magmatic activity still evident high up on the cratered and strafed walls here. As I descend, step-by-step, more than 300 feet into an empty volcano, a sense of peace washes over me.

It’s one of only two of its kind, still intact anywhere in the world—most collapse on their own weight, irreversibly filling in their inner chamber. (The other one, unsurprisingly, is in Iceland.) Once, right here, everything boiled and popped and roared out, the lava creating a path all the way to the sea, forming a green belt of volcanic soil still distinct from all the areas around it, as well as its own “faja,” a brand-new piece of land jutting into the water.

Now, this is a place of serenity. Stepping lower and lower, I look up into the cone, I see sunlight filtering through, washing over lush greenery, ferns, and moss, and huge raindrops plummeting from the top of the chimney. It’s a UNESCO-recognized world wonder. My guide, Mara Godinho, says it took awhile for the locals to see its value. “They found it when they were looking for cows in the 1890s,” she tells me. “Then, they kind of forgot about it.”

Like so much on the Azores, a string of seven islands in the middle of the Atlantic Ocean and an autonomous zone that’s part of Portugal, the incredible, the mind-bending, the awe-inspiring is often accepted as a normal, day-to-day reality. Plunging sea cliffs. Fields so green they glow like neon. Black-rock swimming pools that cling to the coast, regularly refreshed by a crashing, rolling surf. Empty volcanoes, with staircases that stretch right from top to bottom.

Arriving on the Azores

When you land at the islands’ primary international gateway in Ponta Delgada on the island of Sao Miguel, you’re channeled into either of two lines. The first—for those who haven’t been tested, where staff heavily outfitted in PPE will provide you with a deep-nose swab, and ask you to quarantine for the next day or so, until the results are revealed. The other, for those with PCR-negative tests in hand (completed in the past 72 hours), where workers document your test, and take down your contact information.

Climbing into a van and winding up a series of two-lane roads to Furnas, a town a couple hours above the island capital, I see the volcanic activity here very close to the surface. Mud pots bubble and steam. Geysers erupt, and people bathe in hot springs. And you can drop a nice stew below the surface and come back a few hours later, finding it juicy, hearty, and delicious.

But first, I tour the spot where it’s cooked—a sandy area near a Furnas Lake where several pots steam below the surface. (Guide Eduardo tells me it’s a delicate balance, and usually takes five to six hours. “It’s cooked with just the steam from the volcano. Put it in, and go to the nearest beach,” he says. “But be careful—leave it for too long, and it will be soup.”)

Today, the pot is tended by the culinary staff at the Terra Nostra Garden Hotel, just around the corner, an art-deco beauty that was built in 1935 and is engulfed by a lush botanical garden. I take a tour of the latter, which includes a number of thermal pools, as well as 31 acres of strange and wonderful foliage, including figs and cycas trees.

“They are living fossils,” gardener Carina Costas tells me on a whirlwind circuit through hundreds of plants, rising around ponds, clinging to ridges, curling into coves, all of it definitely feeling rather Jurassic. “They lived with the dinosaurs.”

And then, lunch, which lasts an entire era, as well—a tasting menu that’s a parade of Azorean classics (with local wine pairings), culminating in an elevated version of the time-honored and much-loved “cozido.” Eaten on special occasions across Portugal (and a favorite at Sunday picnics), it’s a stew that brings together everything from sweet potatoes and taro root to chicken, pork belly beef brisket, and a local cinnamon-scented blood sausage called “morcela.” It comes out steaming like a lake of lava, rich and hot and the ultimate spoonful of a place, ingredients from here, cooked under this soil, the taste and fragrance of generations.

It’s enough food to fuel days of adventures—which continue back on Terceira. Just a short flight (less than a half hour), sometimes Azoreans refer to this round, 153-square mile island as an “amusement park,” a place that loves to party, with festivals and bull runs, as well as many things to see and do.

I walk through Angra do Herosimo, the oldest city on the islands, founded in 1478, now a UNESCO World Heritage Site. With guide Mara Godhino, I lunch on local goat cheese, pineapples, and jams at an eco-hotel, and navigate a lava tube called Gruta do Natal (Christmas Cave), a slightly claustrophobic space that, at one point, narrows to a pinch where I need to crouch to reach the other side. (It’s thrilling.)

We visit vineyards protected by black stone walls, walk along vertiginous sea walls, and milk cows on farms, and descend into Algar do Carvao, the empty volcano. And we get splashingly close to the massive waves that crash at Biscoitos, a series of volcanic rock pools on the rugged north side of the island, so-named for their resemblance to the tough, black bread that sailors and fishermen would take with them on long journeys to sea. Godhino also shares another swim spot, similar but smaller and hidden-away.

“I grew up here,” she says, maybe a little wistfully. “I think that’s what we all want now—our own, little, hidden pool.”

I don’t have my own hidden pool. But, while it’s only been a few days, I’ve found a peaceful place, islands where maybe there’s a little magic, amongst the volcanoes. Where the memories—as well as the many courses of food, and wines—will remain with me for a very long time.

TAP Air Portugal provides a number of direct flights from the United States to Ponta Delgada on the Azores, including seasonal routes with full business-class service from Boston (four hours) and Toronto (close to five hours). Travelers can also fly via Lisbon, the airline’s main hub. TAP is a member of the Star Alliance and has implemented a number of protocols as part of Portugal’s Clean & Safe program, from screens and social distancing in their lounges, to masks, wipes, and other safety measures implemented onboard. (FlyTAP.com)

Tour with Azores Getaways, and their invitation to “escape to authentic.” Based in Sao Miguel, the local tour operator knows these islands intimately, and will create a tailor-made program for you, whether you’re looking for luxury, food and wine, to island-hop, or for adventure—or, to do all of the above. (AzoresGetaways.com/en-pt)

In Sao Miguel, stay at Marina Atlantico Hotel—comfortable rooms, set near the sea, with sweeping views, within walking distance to everything in town. (BensaudeHotels.com/en/hotelmarinaatlantico)

On Terceira, stay at Terceira Mar Hotel, recently refurbished, with a huge pool and views out over the ocean, a giant, blue pool, and the green eminence of Monte Brasil. (BensaudeHotels.com/en/terceiramarhotel)

Should your routing take you through Lisbon, stay at the country’s best hotel, Tivoli Avenida Liberdade. A five-star address located on the capital’s swishest street, they offer spacious suites, a casual all-day dining restaurant (Cervejaria), as well as Seen, a top-floor, open-air lounge with excellent food, designer cocktails, and the sweeping views of Lisboa. (TivoliHotels.com/en/tivoli-avenida-liberdade-lisboa)

For entry and exit requirements, keep a close eye on official sites. All travelers (even Portuguese citizens) must produce a PCR-negative COVID test to be permitted onto the Azores, and other provisions seem to shift by the day. If your passport precludes entry now, plan a trip for the spring here:  (AzoresGetaways.com/en-pt)