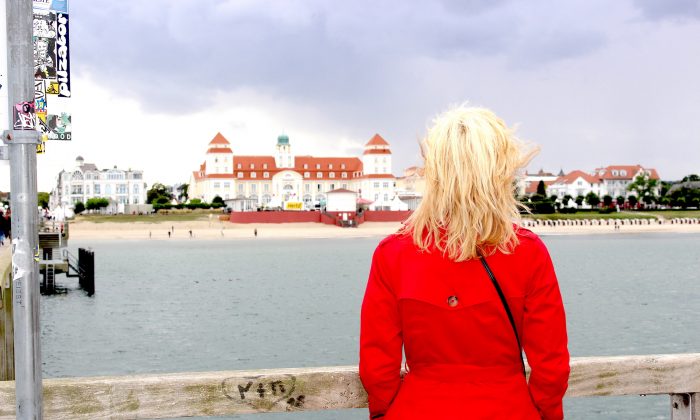 A view of the seaside town, Binz, on the island of Rügen. (Janna Graber)
Travel

I’m glued to the window as our train journeys across the Hindenburg Dam, a narrow rail causeway between mainland Germany and the tiny island of Sylt. Reachable by air and ferry from Denmark, this train is the only other lifeline to the island. Each day, it carries passengers, cars, and cargo across miles of marshland to Sylt.

Out my window is a part of Germany that few foreign visitors see. At first glance, the island doesn’t look like typical Germany at all. Located in the North Sea, Sylt’s wind-swept beaches and wild dunes remind me of the English coastline.

A salty tang fills the air, and as my sister Debbie and I drive Sylt’s quiet roads, we pass grazing sheep, thatched houses, and miles of coastline dunes. Hiking the dunes is a popular pastime on Sylt. Others come for golf, horseback riding, and biking. Sylt is also known for kite surfing and sailing.

Just 38 square miles, Sylt is sometimes called “the Hamptons” of Germany. German celebrities are often spotted here, and the island’s luxury resorts and spas draw the wealthy Hamburg crowd. Sylt is home to 21,000 people, some of whom still speak Söl’ring, the island’s unique German dialect, which has elements of Danish.

We drop our suitcases at Hotel Rungholt, a lovely family-owned hotel in the village of Kampen, and go to explore. We hike up Uwe Dune, the highest point on the island, for a panoramic view of Sylt’s 25 miles of beaches.

Then we walk down to the beach, which is lined with red cliffs. It’s chilly today, but that doesn’t stop beachgoers. Some relax in strandkörbe, hooded wicker chairs, while others walk along the shore. Sylt’s shoreline is under constant threat of erosion, and coastal management is an ongoing task. We meet Greg Baber, an American who came to Sylt in 1972 and never left. Today, he manages the Kampen beaches, an ongoing task that includes beach replenishing.

That effort must be paying off, because Sylt’s beaches are beautiful. We stop by Buhne 16, a beach bar that draws the surfer crowd. Later, we head to La Gran Plage, a beach restaurant with amazing views of the North Sea.

There are more than 200 restaurants on Sylt, many with Michelin stars, and local products like oysters and goat cheese top the menu. Our favorite stop is Kupferkanne. Once a former war bunker, this unique coffee shop has a beautiful setting among hundreds of pine trees. It’s known for huge slices of cake and large cups of coffee. My sister’s coffee cup looks like a soup bowl!

The next morning we take the train to Rügen, a very different and much quieter island in the Baltic Sea. Once part of East Germany, Rügen is unpretentious and popular with Berliners. Farming and tourism are its two biggest industries.

During East German times, only approved elite vacationed here. Since no one could afford to change the island’s historic spas and hotels during communist times, this means Rügen has some of the best-preserved “resort architecture” in the world.

Much of that architecture can be found in the seaside village of Binz, whose beach promenade and wide beaches draw those seeking sand, sun, and sea. Excellent cuisine is also part of our experience here, and we savor the fresh local dishes at Canteen and Strandhalle, both near the beach in Binz.

Rügen is rich in other forms of nature. We hike through the forest to Jasmund National Park, which is famous for its chalk cliffs.

Another afternoon, we hike to the Granitz Hunting Lodge, a castle built in 1846 by Prince Wilhelm Malte I of Putbus. Once a playground for royals, today it has been restored as a museum. We climb to the top tower and find a 360-degree view of the island.

Prora reflects a darker era in Rügen’s history. This 2.8 mile behemoth structure was built by Adolf Hitler for his vacationing forces. Never truly finished, Prora was used to house East German soldiers and then sat empty for years.

After German reunification, people didn’t know what to do with this structure due to its difficult past. Today, Prora has been reclaimed and turned into apartments, a hotel, and several restaurants. Behind it is one of the island’s beautiful golden sand beaches.

Before it’s time to leave, I try one more experience on the island—a relaxing chalk scrub at the Meer Spa at Hotel Am Meer. I’ve covered from head to toe in paste made from local chalk, then wrapped in cellophane. I’m tucked into a warm, narrow water bed, where I snooze. When I awaken, the paste has hardened.

I’m sent to a hot shower to wash it off, and come out refreshed and looking younger—for a few days, at least. It’s the perfect end to my vacation in the German islands.

Janna Graber has covered travel in more than 40 countries. She is the editor of three travel anthologies, including “A Pink Suitcase: 22 Tales of Women’s Travel,” and is the managing editor of Go World Travel Magazine (https://www.goworldtravel.com).