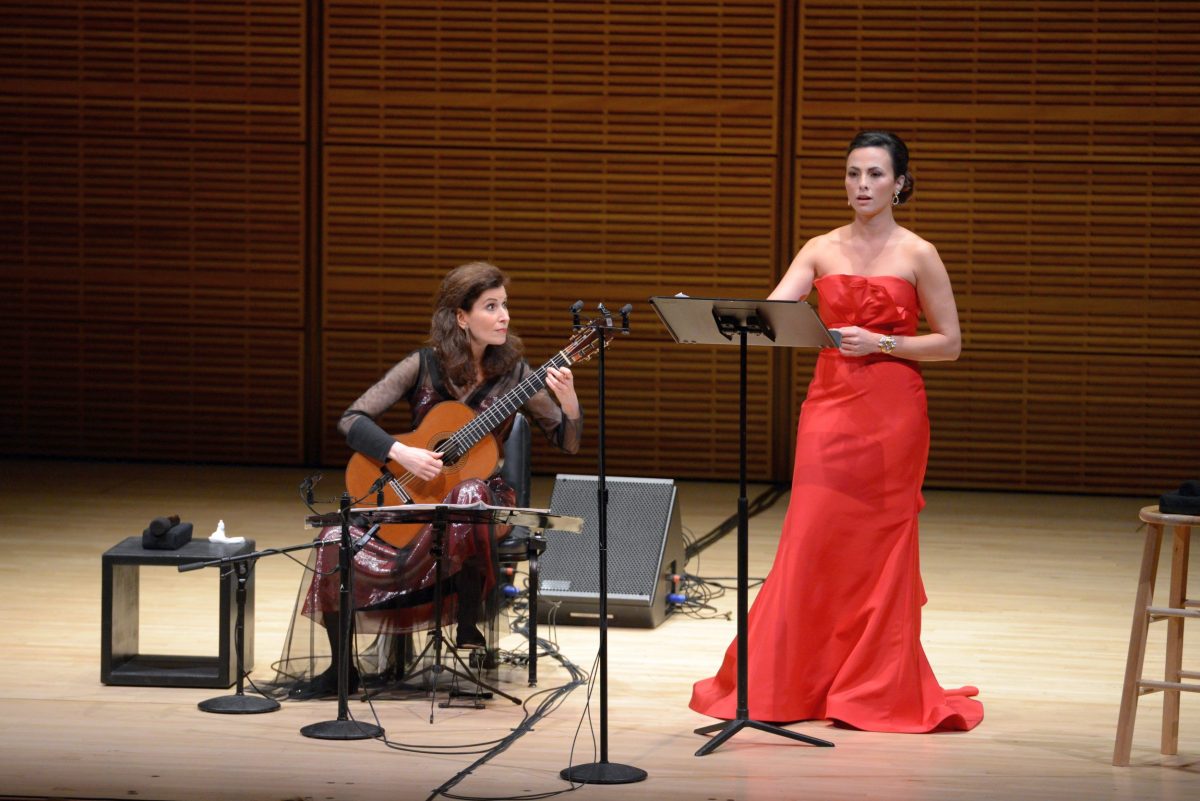 Isabel Leonard and Sharon Isbin in a Recital of Spanish Songs

NEW YORK—When I mentioned to a friend that I was going to a concert of Spanish music, he asked if it was flamenco. No, I answered, the concert is a voice and guitar duo. Though some of the music was inspired by the gypsy music of Spain, the singing would not be rough or raspy as it usually is in flamenco. The singer was Metropolitan Opera star mezzo-soprano Isabel Leonard and the guitarist was Sharon Isbin.

The pair have been appearing together around the country, and this concert was at Zankel Hall—a more intimate hall within the Carnegie Hall complex.

At the Met, I have heard Leonard sing in French, Italian, and English, the latter in Thomas Adès’s “The Tempest,” the winner of the Grammy Award this year for Best Opera Recording. The native New Yorker is of Argentine descent and she has previously sung Spanish songs and has recorded them, albeit with a pianist.

Isbin, a multiple Grammy winner, is a classical guitarist but also eclectic. Shortly before this concert, Isbin had performed with Sting. She has a strong connection to Spanish music, having studied with Andrés Segovia and worked with Joaquín Rodrigo, a composer of one of the works at the concert.

The women were dressed in high fashion: gowns designed by Austin Scarlett (who was in the audience). Between songs, they spoke to the audience about the pieces.

Leonard has a gorgeous voice and in her vocal coloring as well as her dramatic stance, she communicated the meaning of every line. It was helpful that the program notes included the words in Spanish and English.

The concert began with a set of songs by Federico García Lorca (1899–1936) from his “Old Spanish Songs” (“Canciones españolas antiguas”). Several of the Lorca songs dealt with bullfighting. In “Chinita’s Café,” a young man boasts that he will kill the bull by 4:30, the Spanish equivalent of Babe Ruth pointing to center field before hitting a home run. On the other hand, in “The Lads of Monléon,” it is the bullfighter who dies.

“The Ballad of Don Boyso” tells the story of a nobleman looking for a bride but later discovers that the woman he is bringing back home is his long-lost sister.

The rhythmic “Anda, jaleo” (“Come, clap hands”) is a song that folk enthusiasts will recognize as one that the Weavers used to perform. Several of the pieces deal with love, either disappointed (“Zorongo”) or hopeful (“Tarara”).

In between the vocal sections, Isbin played solo pieces: “Andaluza” from “12 danzas españolas” by Enrique Granados, the spellbinding “Asturias” by Isaac Albéniz in an arrangement by Segovia, and Francisco Tárrega’s atmospheric “Recuerdos de la Alhambra.”

Although Isbin played one guitar, she frequently changed the tunings.

The second half of the concert began with the world premiere of three songs, “Of Love and Longing” by Richard Danielpour. The work was specifically written for Isbin and Leonard to perform during Carnegie Hall’s 150th anniversary season. The texts are translations by Raficq Abdulla of poems by the 13th-century Persian poet Rumi. The passionate songs fit in with the Spanish works on the program, and the composer joined the performers on stage to take a well-deserved bow.

Isbin introduced the song “Aranjuez, My Thought” by explaining that Rodrigo consoled himself by playing this music when his wife, Victoria, was ill in the hospital. She recovered and wrote the words for the piece, which ends with the singer recalling the happy days when the lovers were 20 years old.

Leonard and Isbin then performed Xavier Montsalvatge’s popular “Lullaby for a Little Black Baby” and “Black Dance” and Manuel de Falla’s “Seven Popular Spanish Songs.” As an encore, the duo ended on a high note with the flashy “Granada” by Mexican composer Agustín Lara.

For those who want more Lorca, on Nov. 25, Carnegie Hall will present “Lorca Madly in Love” by David Morales and his Flamenco Company along with Grammy Award-winner Miguel Poveda.

Arlo Guthrie will return to Carnegie Hall for his annual Thanksgiving concert on Nov. 28. The centerpiece of his performance will be the entire “Alice’s Restaurant Massacree,” the satirical work that catapulted him to fame.

Nov. 17–21, the Berlin Philharmonic Orchestra is at the Stern Auditorium, and Duncan Sheik (whose “Spring Awakening” is again a hit on Broadway) will appear at Zankel Hall on Nov. 21 at 10 p.m.