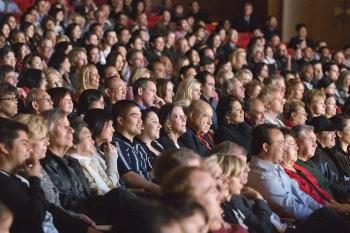 Investor Will Tell His Friend to See Shen Yun

He continued, “The show was really great. It was outstanding in every way. It was well performed, very professional, and I enjoyed it very much.”

Mr. Hoffman liked the performances portraying ancient legends and modern tales. He said, “I liked it very much. I hope to go to China some day.” The artists in Shen Yun are based in New York. Most of the dancers are ethnic Chinese, who were born in the West.

He felt that the values embodied in the performances were “excellent,” and he “enjoyed it very much.”

Mr. Hoffman has a friend in South Korea and noticed that Shen Yun would perform there shortly. He said he will tell his friend. "He will want to see it, I’m sure. He’s in the music business. He creates music, he writes his own music. Korean people know him very well.”

To sum up, Mr. Hoffman repeated, “I enjoyed it very much.”

‘It broadens my understanding of Chinese culture’

Mr. Sultheim, also an investor, was in the audience to see his first Chinese cultural show. He said he enjoyed Shen Yun very much.

“It broadens my understanding of Chinese culture. The arts, the dance, and music—I’m enjoying them very much.”

“We think everyone has been of the opinion that the costumes are very good and the visual effects are very interesting,” he added.

The New York-based Shen Yun tours with a live orchestra consisting of both Western and Chinese instruments, as well as vocal soloists. Mr. Sultheim felt this added to his pleasure.

“I found the singing to be excellent and also the piano playing, as well as the orchestra below. I’m listening to the orchestra.”

Mr. Sultheim particularly enjoyed the Mongolian dance and the Tibetan dance, because of the music and the performance of the dancers.

With reporting by Jim Li and Qu Zheng.

Shen Yun has three dance companies and three orchestras. While one company performs in Los Angeles until February 14, another Shen Yun company will be performing at Radio City Music Hall in New York for the Lunar New Year, the weekends of Feb. 13-14 and Feb. 20-21. The third company just finished its last performance in St. Louis on Feb. 13 and will be traveling to South Korea for a Feb. 17 show.