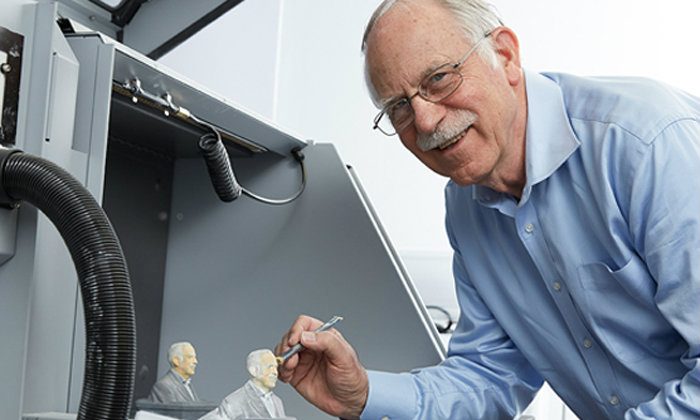 Although Charles “Chuck” Hull would not call himself a futurist, over the next couple of decades his invention could change the way we build everything from toys to space stations. For now, he will be happy if his 3-D printing helps with improving efficiency, quality, and productivity in companies. He emphasizes its role in creating prototypes.

“It was an engineering tool. It was initially developed to help engineers prototype parts. Pretty early on we kind of got a glimmer that it was going to have a broader application,” said Hull.

It all started in a lab where Hull was working as an engineer to create prototypes in the 1980s. He had been using resin to harden the surface of prototypes, when he suddenly realized he could layer the resin. Once layered, the resin could be molded into place using UV lighting. 3-D printing was born. It would be another 30 years before it really took off.

It took about a decade to develop into something useful at the industrial level. Plodding along over decades, Hull was caught by surprise when 3-D printing began to boom over the last few years. He doesn’t concern himself too much with the future, but concentrates on what can be done here and now.

“The process of additive manufacturing, of stacking up cross-sections of an object has become pretty universal … it sparked peoples’ imaginations—there are all kinds of ways and all kinds of things that could be made this way,” said Hull.

The car industry was an early adopter for 3-D printing. Soon dental and medical fields followed, and once printer prices came down, hobbyist joined in.

Hull, a nominee for this year’s European Inventor Award, explained how, back in the 90s, car manufactures in Detroit would take up to six years to crank out a new design that was not very competitive. Now, with the aid of 3-D printing, and digital manufacturing as a whole, these same companies can produce a high-quality design in three years. He said the technology could help American and European companies compete with Asian companies.

Hull is currently the Chief Technology Officer at 3D Systems (NYSE:DDD), which he co-founded in 1986. Although in his 70s, he does not show any sign of slowing down any time soon. The first object he ever printed was an eye cup used by optometrists, now 3D Systems prints anything from ekso suits that help paralyzed or otherwise disabled people walk to detailed Spider-Man figurines.