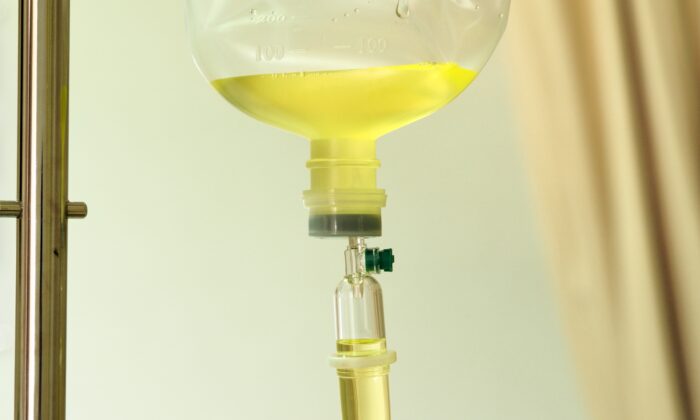 Intravenous treatments of vitamin C are often tried with a variety of conditions because of the relatively safe nature of the treatment. (Capture_The_World/Shutterstock)
Mind & Body

Vitamin C is an essential nutrient for humans and has been studied for its potential benefits in treating a variety of conditions including the common cold, lowering cholesterol, improving fertility, and reducing the risk of cancer. Recently, four separate case studies have tested the efficacy of intravenous vitamin C against a series of viral infections.

Each study showed positive results, concluding that intravenous vitamin C is a potential treatment and can be used to effectively alleviate symptoms for four specific viral infections.

Infectious mononucleosis, often referred to as “mono,” is a viral infection of the Epstein-Barr virus (EBV) that’s transmitted by saliva. Symptoms include sore throat, fatigue, headache, upper respiratory symptoms, fever, and loss of appetite. Researchers estimate that roughly 90 percent of the world’s population is infected with EBV, although most don’t show symptoms.

However, the severe fatigue that often accompanies infectious mononucleosis can be debilitating and have long-term effects on school or work attendance. An EBV infection can also trigger autoimmune diseases through the excessive stress it puts on the immune system. Most conventional treatments of EBV are supportive in nature, meaning they treat the symptoms and not the viral infection.

Researchers have tested a variety of natural compounds to find if any could suppress viral replication and shorten the duration of illness. Studies have found that high doses of intravenous vitamin C can effectively reduce EBV antibody levels, shortening illness, and lessening symptoms.

In a case report, researchers described the effects of intravenous vitamin C on a 30-year-old woman suffering from an EBV infection, reporting that the treatment (using 50 grams (g) of vitamin C for three consecutive days) reduced symptoms after only five days, with no adverse side effects.

Researchers believe that vitamin C’s efficacy is due to its ability to increase cytokine production and neutralize the oxidative stress caused by the viral infection.

Chikungunya fever is a viral infection transmitted by mosquitoes and is most commonly found in Africa, Asia, and India. Symptoms include fever, joint pain, muscle aches, headaches, and rash, with most symptoms lasting for a week.

While not usually fatal, the joint pain caused by the Chikungunya virus can be debilitating. Symptoms are often treated with acetaminophen, but no consistent patient protocol is in place. As an antioxidant, vitamin C possesses potent antiviral properties and is also effective at increasing the production of T-cells and natural killer cells, both of which increase the immune system’s response to viral infections.

In a recent case report, a 54-year-old Hispanic patient was treated with high doses of intravenous vitamin C for two days and experienced a significant reduction of symptoms on the first day and a complete absence of symptoms on the second day.

Researchers found that vitamin C is able to effectively increase immune response, may inactivate RNA and DNA viruses, and reduces pain and inflammation caused by a viral infection. For these reasons, and based on the recent case report, researchers are eager to continue testing the efficacy of ascorbic acid against the Chikungunya virus.

Ascorbic acid has long been studied for its mitigating effects on influenza symptoms and duration, but a recent case study found that intravenous (IV) use of vitamin C may be an effective treatment protocol for severe cases of the flu. The report tracked the efficacy of intravenous ascorbic acid in a 25-year-old male who had been suffering from flu-like symptoms for over a week.

Symptoms included weight loss of 15 pounds, fever, chills, nausea, and joint pain. As in other case reports, the patient was treated with 50 grams of intravenous vitamin C daily and experienced no adverse side effects. The patient noticed significant improvement within 24 hours after starting the initial IV, including an improvement in appetite, lack of headache, and increased strength.

IV treatments lasted for four days, after which the patient felt “normal,” but continued to take smaller amounts of vitamin C orally following the IV. Given that acute influenza symptoms can last five to seven days or longer and that coughing and exhaustion can last much longer, the fast recovery following intravenous ascorbic acid treatment led researchers to determine that this treatment could be used for a variety of viral infections.

Zika fever is an arthropod-borne viral infection that causes fever, joint pain, and red eyes, and may increase the risk of congenital birth defects in infants when transmitted to pregnant women.  No official treatments exist, but a recent case study found that intravenous vitamin C resolved symptoms after only three days of treatment.

Researchers believe that the correlation between oxidative stress and viral infection may explain the efficacy of vitamin C in reducing Zika fever and other viral infection symptoms, as vitamin C is known to have potent antioxidant properties.

Based on numerous studies and the case reports listed here, it seems plausible that intravenous vitamin C could be a key to reducing the severity of viral infections and alleviating symptoms, in some cases perhaps even more quickly than the standard protocols currently in place. To learn more about this body of research and to view a complete list of the studies being done, please visit our GreenMedInfo.com intravenous vitamin C database.