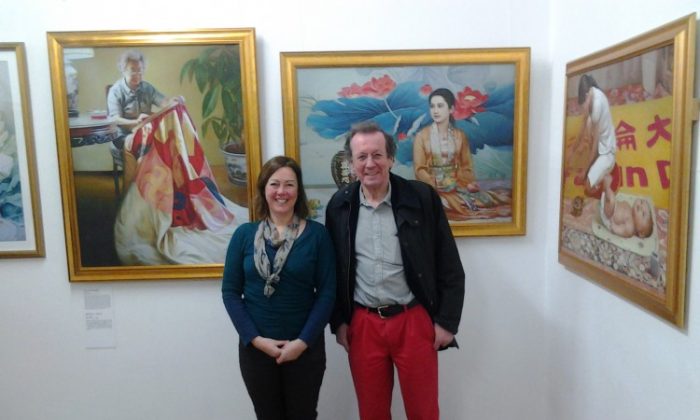 Rebecca James with the Mayor of Bristol, George Ferguson, at the Island Gallery exhibition of The Art of Zhen Shan Ren (Truth, Compassion and Forbearance). (The Epoch Times)
Arts & Culture

“There was no doubt in my mind that we needed to follow it up,” said Becky James about the international art tour which she had been supporting in Falmouth and Sidmouth during October 2012.

“The next morning after arriving back in Bristol, a friend rang to offer the gallery space at The Island in Bristol city centre,” she said. “Since my only experience with the previous exhibition was basic support and leafleting, I knew this would be a huge challenge.”

The extraordinary exhibition has inspiried and moved millions since its global touring began in 2004. The exhibition consists of realistic oil paintings and Chinese watercolours created by mostly Chinese artists.

Through what they call ‘New Renaissance’, the artists share a vision to restore the beauty of traditional art, with an understanding of an ancient belief, that to create true art requires inner purity and a good heart that embraces upright moral principles.

The artworks also give a unique insight into the spiritual discipline of Falun Gong, also called Falun Dafa, a meditative practice originating in China, which is based on the principles of Truth, Compassion and Forbearance, the Zhen Shan Ren of the title.  Part of the exhibition is dedicated to showing how Falun Gong is changing people’s lives by providing them with a return to traditional Chinese values, as well as to documenting a real-life tragedy of modern China.

Despite, or rather, because of its deep traditional roots, Falun Gong was banned in China in July 1999 and thousands of practitioners – including some of the artists themselves – experienced terrifying torture and shocking ordeals in a violent and ongoing persecution which some call a flashback to China’s Cultural Revolution.

Professor Zhang Kunlun, founder of the exhibition and former Director of the Institute of Sculpture at the Institute of Art in Shandong, says the artwork details both an inner spiritual life and an outer human rights tragedy.

“Our art comes from a pure heart and our work reflects our personal experience. Art is able to greatly influence the way people think and it also directly connects with human morality. And the two interact,” professor Zhang says.

Since 2004, The Art of Zhen Shan Ren has toured over 200 cities in 40 countries in Europe, the Americas, Asia, Africa, and Australia, receiving numerous proclamations and letters of support. Volunteers from around the UK came together to hold the exhibition, which was in Bristol for the first time.

Tony Nyboer, from Gloucester, said: “It was an honour to volunteer with this art exhibition. I felt privileged to introduce people to the truth about the persecution in China.”

“From the perspective of a volunteer distributing leaflets and informing others about the exhibition,” said Heidi Bamford of Falmouth, “I found people were particularly interested to see it once they became aware that it not only highlights a beautiful cultural and spiritual way of life, but also a serious human rights issue.”

The Island Gallery Space in the central shopping area is a standout building which is well-known by grassroots art lovers in a city which has won the UK’s Green City award for several years.

George Ferguson, the new Mayor of Bristol, attended the opening ceremony. “Thanks for bringing [the exhibition] to Bristol. It is an important message,” he wrote in the visitor’s book.

Dina Ntziora, Project Coordinator at The Island had arranged the use of the gallery space where Jono Boyle, a well-known local artist, cut the ribbon to officially open the exhibition.

The exhibition attracted a broad mix of visitors from all ages, ethnicities and walks of life – a great many finding out by word of mouth.

“Lots of people came back, as they do, and brought friends. As always, all were visibly moved, spending a long time contemplating the works and discussing them afterward,” said Anthony Archer, who has supported the exhibition in many UK cities.

One visitor, when asked about what attracted him to the exhibition said: “Well, it opens your eyes to what’s going on, doesn’t it. I didn’t know about it [the persecution] before, so it really does open your eyes.”

A Spanish woman, Lola, said: “What is happening in China today is terrible with these people being tortured. I recently started to learn the Chinese language. I wish to go with my husband to China in the future to stay for some time, but now it is not peaceful there yet.”

While pointing at the volunteers with a sincere smile that expressed her hope and gratefulness, she added: “We will go there when you clean it, and make China better!”

With additional reporting by Damian Robin