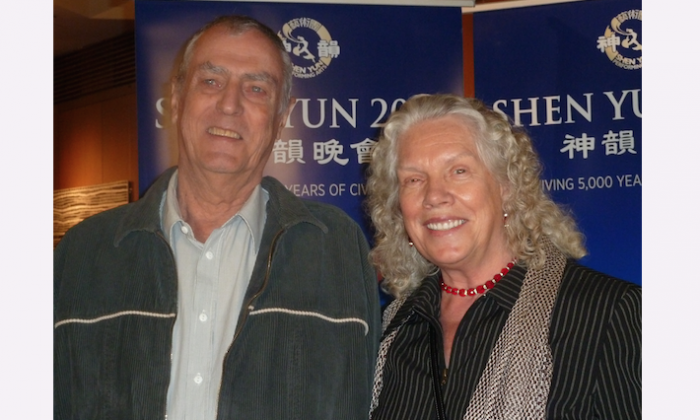 Interior Decorator ‘Stunned’ by the Beauty of Shen Yun

Now retired, Mrs. van Leeuwen was an interior decorator who owned her own business, and came to see Shen Yun with her husband Marco, a retired mechanical engineer, and their granddaughter, who had treated them to the performance. The van Leeuwens emigrated from Holland in 1956.

The family was overwhelmed by the beauty of Shen Yun.

Mrs. van Leeuwen said, “It made me smile, it put tears in my eyes, we couldn’t believe the scenery, it was overwhelming, totally overwhelming.”

Shen Yun is based in upstate New York with a mission ”to revive the true, divinely inspired culture of China and share it with the world,” the company website explains. “Through the universal language of music and dance, Shen Yun weaves a wondrous tapestry of heavenly realms, ancient legends, and modern heroic tales, taking you on a journey through 5,000 years of Chinese culture. Its stunning beauty and tremendous energy leave audiences uplifted and inspired.”

Mr. van Leeuwen said, “I’m amazed that is was performed on a stage like that and it brought so much art and so so many nice things. And it brought the inner self of the performers in.”

Wishing the show could have lasted forever, Mrs. van Leeuwen said, “The costumes were out of this world, the colours of it, the flowing of the dresses, the feminine girls, the feminine women. It was so beautiful! Amazing, graceful, very graceful. It went too quickly.”

State-of-the-art digital backdrops are magical windows transforming the stage into different realms. “From vast open grasslands in one dance to the stately elegance of Tang Dynasty pavilions in another; from dusty yellow battlegrounds to tropical beaches to Himalayan peaks to picturesque scenery of the Yellow River Delta—the digital projection infinitely expands and transforms the stage,” the website explains.

Mrs. van Leeuwen said, “That was the amazing thing, the seasons came in, the colours came in and the performers came out of the scenery, that was so amazing. Amazing amazing show.”

Her husband added, “The technology in behind it was fantastic, especially the off the stage and into the sky, bringing the history back in the most beautiful way.”

Mrs. van Leeuwen mentioned the soprano Min Jiang singing “Heavenly Secrets,” which the audience appreciated so much that she sang an encore. She said, “Ah that girl! Ah her voice, where did it come from? That was so nice.”

The van Leeuwens wanted to thank the performers for dancing, and bringing this amazing performance to Adelaide.