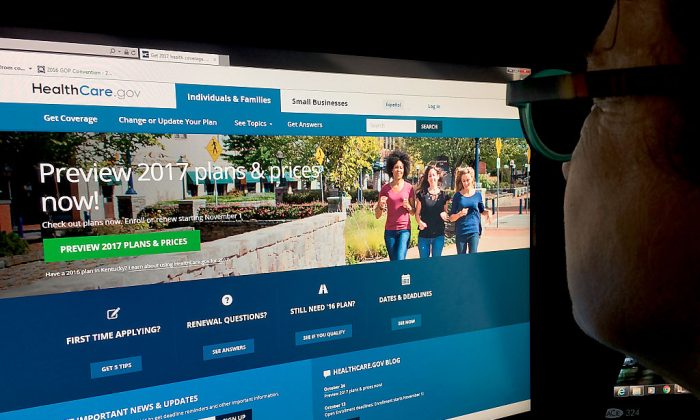 WASHINGTON—States should expand health insurance offerings and Congress and the White House should work to get rid of certain Affordable Care Act (also known as Obamacare) mandates that smother competition, an interagency report released Dec. 3 recommends.

The report, a collaboration between the departments of Health and Human Services, Labor, and Treasury, offers recommendations to the White House, Congress, federal agencies, and state governments on how to increase choice and competition in health care.

Most of the suggestions center around deregulating the market, and cover areas such as the physician labor market, health plan options, provider networks, and the removal of the ACA’s employer mandate, among other things.

The report suggests repealing the employer mandate, which requires businesses with 50 full-time employees to provide minimum essential coverage to all their employees or risk paying a penalty. Similarly, it advocates for health reimbursement accounts (HRA), which are employer-funded accounts that fund employee health care.

In October, the aforementioned three agencies proposed a rule that would increase the ways employers fund health coverage for employees, including with HRAs. HRAs can currently be used by employers, but only in addition to plans that provide essential coverage. The rule would allow employers to use HRAs with individual plans as well.

“If finalized, this flexibility would empower individuals to take greater control over what health insurance benefits they receive,” the report says. “In addition to the benefit for workers, the proposed rule would better enable businesses to focus on what they do best—serve their customers—and not on navigating and managing complex health benefit designs.”

The Treasury Department estimates the rule could affect some 10 million employees.

The report takes issue with the “essential coverage” mandate of the ACA, which it argues requires employers and individuals to pay for things they don’t need. It has also led to an increase in premiums. To illustrate this, the report cites ASPE data from 2013 to 2017 that shows premiums increased 105 percent in the 39 states using the HealthCare.gov website.

It also attributes ACA mandates to a decline in choices for consumers. It cites the conservative Heritage Foundation think tank, which put out a study showing a 44 percent decrease in providers from 2013, the year before the majority of ACA mandates took effect, to 2017.

To remedy this, it suggests the federal government reduce its mandates so that states have more flexibility to tailor coverage to their domestic markets.

The Centers for Medicare & Medicaid Services (CMS) has already encouraged states to apply for ACA waivers that allow for experimentation within certain boundaries. So far, eight states have gotten approval for their waivers.

“Health care markets could work more efficiently and Americans could receive more effective, high-value care if we remove and revise certain federal and state regulations and policies that inhibit choice and competition,” the report says.