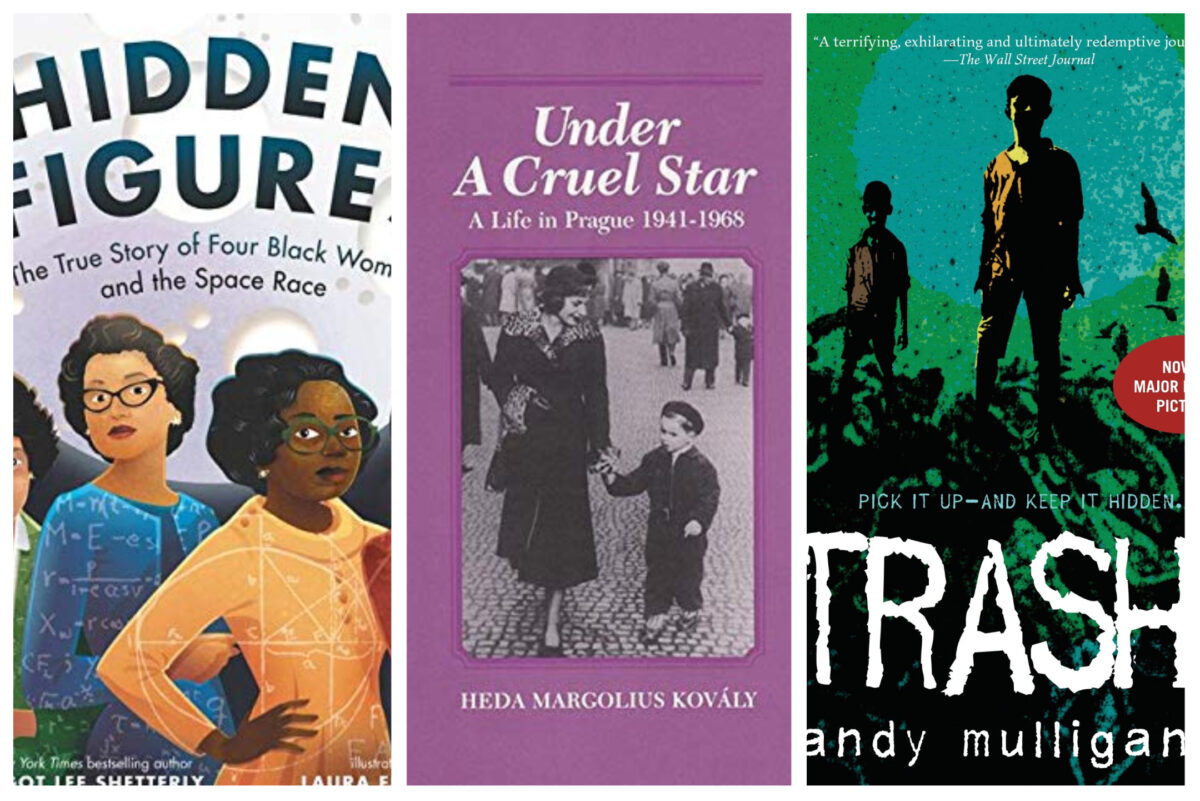 The books “Hidden Figures,” “Trash,” and “Under a Cruel Star” will open young readers’ eyes to lesser-known heroes who moved forward with bravery, determination, and hope, even when the worlds they lived in sought to diminish or even extinguish them.

“Hidden Figures” is a nonfiction picture book that uncovers the story of four African American women whose mathematical skills played a major role in the U.S. space program. The picture book follows Shetterly’s full-length nonfiction work, as well as a 2017 feature film of the same name.

The picture book traces each woman’s journey as she perseveres against the unfair laws and prejudices of the segregated South. Dorothy Vaughan, Mary Jackson, and Katherine Johnson are introduced as being good at math—really good. These three women work hard to become “computers” in an aeronautics laboratory that creates and tests airplanes and eventually sends rockets into space. The three women pave the way for Christine Darden, whose career begins several years later, to work at NASA during the first mission to land a man on the moon.

Charmingly illustrated and highly informative, the book ends with a timeline tracing the history of flight in America from the Wright brothers to the moon landing. Recommended for children ages 6 to 10, “Hidden Figures” would be a great addition to any child’s bookshelf. (HarperCollins, 2018, 40 pages)

Set in an unnamed third-world country, Andy Mulligan’s novel “Trash” tells a darker story about three boys fighting against corruption. Living in Behala, where trash heaps stretch up and over the landscape like a mountain range, the boys spend their days searching through the piles of garbage for anything of value that can be sold to support their families.

When one of the boys finds a wallet full of money, it seems like a dream come true. However, the discovery of the wallet brings the boys into contact with their country’s corrupt infrastructure, schemes of embezzlement, and wrongful imprisonments. To make matters even more dangerous, the boys risk their lives by taking on a mission that had caused a noble man’s unjust death.

This book describes a very different world than the one familiar to most of us. Against a background of cruelty and poverty, the empathy, nobility, and bravery of the main characters shines brightly. Because the story is told from multiple perspectives, readers experience not only each boy’s point of view, but also those of a priest at the local mission school and a horrified volunteer social worker.

While it’s an exciting story that will appeal to both boys and girls, parents should know that the book depicts a harsh world that includes police brutality and inhumane prison conditions. It may not be appropriate for children younger than 12 or 13 years old. (Ember, 2011, 240 pages)

‘Under a Cruel Star: A Life in Prague, 1941–1968’ by Heda Margolius Kovaly, translated by Helen Epstein

Kovaly’s memoir tells the story of a life so full of hardship that it’s hard to even comprehend. This important story exposes the injustices of some of the darkest moments in modern history. From the first pages, Kovaly identifies three forces that shaped her life and also shape the book: Hitler, Stalin, and a combination of life, hope, and love.

The book traces Kovaly’s life, beginning with her escape from a Nazi concentration camp and ending just after the Soviet Union’s invasion of Czechoslovakia almost 30 years later. With her post-World War II return to her beloved hometown, Prague, comes an adjustment to life after the end of the war.

Itself weakened by war and suffering, Czechoslovakia is vulnerable to the glamorous illusion that communism will bring it unity and prosperity. Although hesitant to dismiss the democratic tenets that Czechoslovakia was founded on, Kovaly goes along with her husband and becomes a Party member. Soon, the idealistic promises of the Communist Party are swept away as an evil and tragic reality is revealed.

A moving story of bravery, forbearance, and love of country, Kovaly tells her story without ever dipping into self-pity. This book delivers important truths about the human condition and its moments of greatest weakness and strength. At fewer than 200 pages, this book isn’t long, but it’s poignant. “Under a Cruel Star” would be best suited to mature readers aged 17 and older. (Holmes & Meier Publishers, 1997, 192 pages)