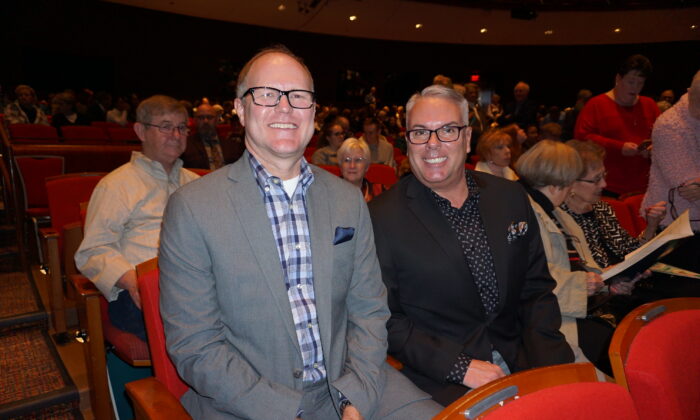 ATLANTA–When educators Dale Winkler and Jeffrey Castle sat down to watch Shen Yun Performing Arts at Cobbs Energy Performing Arts Centre, a desire to share this experience with others emerged.

Winkler loved the idea of his former students seeing Shen Yun. Castle, an educator from the Georgia Department of Education, said, “I was thinking of so many people we could recommend this show to.” He also added, “It was an outstanding performance.”

During the performance, Castle noticed the featuring of live classical Chinese and Western music, particularly with the dance, “Song of the Grasslands,” which showcased the carefree and boundless spirit of the Mongolian horsemen.

Castle said the music that accompanied the dance helped convey an atmosphere of “cowboys on the grassland.” He also experienced a feeling of happiness and great relaxation from the music.

“Happy like you can feel the plains and the horses,” Winkler said in agreement.

Based in New York, Shen Yun promotes China’s 5,000 years of traditional Chinese culture through classical Chinese dance and music. The company also pioneers in bringing Eastern and Western music together by combining ancient Chinese instruments with a Western orchestra.

According to the company’s website, “The Shen Yun Orchestra combines the spirit, beauty, and distinctiveness of Chinese music with the precision, power, and grandeur of the Western symphony orchestra. The result–two great traditions producing one refreshing sound.”

The dance, “Abetting the Wicked” was “very inspiring” and informative for Winkler. It tells the story of followers of the spiritual practice of Falun Dafa being subjected to the brutal persecution from the Chinese Communist Party. As a person who believes in a higher power, Winkler found the dance powerful.

The state of China’s society in the past was not like how it is today. In ancient China, people believed in the divine and valued concepts such as harmony, kindness, and wisdom. This was a fundamental part of China’s identity and the Chinese way of life. In 1949, a Communist takeover started a new and dark chapter in China’s history. Religious establishments were desecrated. Traditional values and customs were condemned. And to this day, spiritual practices like Falun Dafa are outlawed in which those who practice face imprisonment, torture, and death.

Shen Yun’s mission is to save the traditional and spiritual heritage of China from being eradicated by the Chinese Communist regime, and this includes stories that shed light on the humanitarian crisis that is happening in China.

Business owner Scott Bertrand had a front-row seat at Shen Yun’s performance, giving him an up-close view of both the orchestra as well as the dancers.

“It’s as good as I’ve seen, it really is, and like I’ve said, I got a great seat, like I could nearly reach out and touch them. So I was in the perfect spot, and it was great,” he said.

Shen Yun dancers follow the style of classical Chinese dance. It is an old traditional Chinese system of dance that has been developed for thousands of years. The dancers undergo strict training exercises which include practicing on posture and a wide variety of dancing techniques.

Bertrand said there were seven dances that were moving, but of all seven, he found, “Water Sleeves” to be the most moving.

He said, “I thought that was very impressive. Beautiful, absolutely, very graceful, and incredible. It was an incredible performance, really.”

The entrepreneur enjoyed watching the dancers and their display of athletic ability. “The dances were great, the flexibility of the artists are impressive I have to say,” he said.

With reporting by Sally Sun and Don Tran.