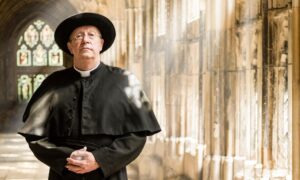 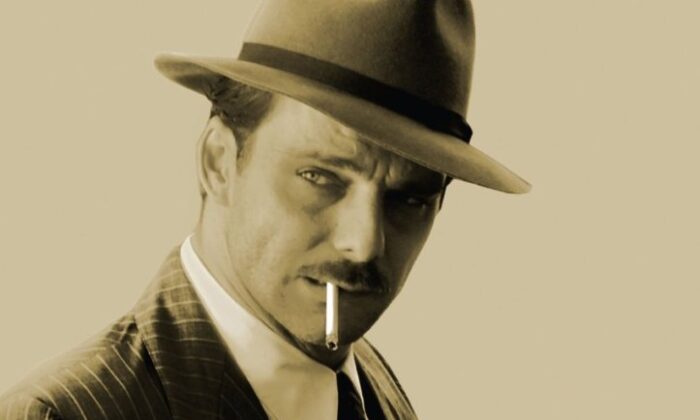 Inspector De Luca (Alessandro Preziosi) is billed in the miniseries bearing his name: “He’s not a fascist. He’s not a partisan. He’s just a cop.” (Radio-Television Italy)
Literature

In corrupt or brutal regimes, the truth is often a crime. The Inspector De Luca detective novels of Carlo Lucarelli (born in 1960) serve as a reminder of this fact. Although fun and stylish examples of the police procedural genre, these slim books are fictional examples of the eternal morality of justice and how often this morality gets perverted by politics.

While a student working on a thesis about the police during the Italian Social Republic (1943–1945, also known as the Republic of Salò), Lucarelli discovered a unique survivor—a real police officer who managed to serve Mussolini, the communist Italian partisans, and the democratic government of postwar Italy. In this man, Lucarelli found the germ of a character that would eventually blossom to become Inspector De Luca.

In the words of scholar Barbara Pezzotti, De Luca is the embodiment of apolitical professionalism, and in Lucarelli’s three novels (“Carte Blanche,” “The Damned Season,” and “Via delle Ocha”), De Luca manages to solve his cases while simultaneously trying to keep from being swallowed up by the rapid tides of Italian politics.

“Carte Blanche” (published in Italian in 1990 and translated into English in 2006) sees De Luca, a veteran of the infamous Black Brigades paramilitary unit, return to regular policing duties in Bologna. This is where De Luca would rather be instead of working with the political police.

Not long after arriving in the city, De Luca investigates the murder of Rehinard Vittorio, a notorious playboy. The crime is a classic whodunit that even features a locked room. Vittorio is the archetypal “bad boy” character who seems to take pleasure in breaking female hearts. He’s another type of scoundrel in that he also deals in narcotics.

The problem for De Luca is that Vittorio is a member of the Republican Fascist Party, which still rules northern Italy in 1945. Fascist politicos are convinced that interparty rivals are to blame for Vittorio’s murder, and they lean heavily on De Luca to confirm their suspicions. De Luca is too honest for such tactics, and he discovers a secret network of party members, including the deceased Vittorio, trying to save their skins from postwar war-crime trials by cooperating with the Vatican and the Allies.

De Luca knows too much and is marked for assassination, but he manages to survive and solve the case.

Just as De Luca brings the guilty party to the police station, he finds the city in full retreat from the advancing Allies and the mostly communist Italian partisans. In the face of such developments, nobody cares about a simple murder.

In “The Damned Season,” De Luca, despite being targeted for execution because of his former work with Mussolini’s government, winds up working with the communist partisans. Here, in a rural Italy rife with civil war and factionalism, De Luca must solve the murder of a popular local peasant.

It does not take De Luca long at all to anger the partisans, for one of his chief suspects is a powerful local commander and hero of the anti-fascist resistance. Once again, politics interferes with De Luca’s job, and once again, he solves his case but winds up facing harsh punishment for his pains.

The final De Luca novel, “Via delle Ocha,” has De Luca back in Bologna during the contentious 1948 Italian general election. The murder in this novel occurs in Bologna’s infamous red light district (hence the novel’s title).

The victim is a boxer and member of the Italian Communist Party. Several of De Luca’s comrades, especially the former members of the partisans, suspect the murder to be the handiwork of right-wing radicals, including unrepentant fascists.

De Luca suspects others, including a particular “woman of the night,” to whom he develops a strong attraction.

Sadly, “Via delle Ocha” turns out no different for De Luca, as he is pulled from his case and is sent to provide crowd control for a massive riot following the attempted assassination of Palmiro Togliatti, the leader of the Italian Communist Party.

From Paper to Screen

As for the show, it stays faithful to the original novels while also adding a dose of noir grit and 1940s glamor. One would be hard-pressed to find a better way to spend a lazy Sunday than by binge watching this incredible miniseries. It also has maybe the best tagline in television history: “He’s not a fascist. He’s not a partisan. He’s just a cop.”

A Trilogy for Today

While Lucarelli belongs to a wider culture of left-leaning detective fiction writers who enjoy complicating a “stuffy” and “reactionary” genre, and while he toys with audience expectations by muddying up the typical detective novel formula, he saw beyond those views: His De Luca novels provide insight into themes that go beyond politics.

De Luca is a hero because he is apolitical and loyal only to the truth. He earns the respect of fascists, communists, and democrats because he is honest and cannot be swayed by either strong-arm tactics or bribery. However, this same quality makes De Luca an enemy of multiple regimes, all of whom see his work as threats to their rule. This is why De Luca’s cases never end cleanly, as politics trumps justice.

This is the dire warning hidden in these fun detective novels. Italy, which experienced a prolonged period of political instability and violence known as the “Years of Lead,” tore itself apart because of radical politics. The United States in 2021 is on the verge of its own “Years of Lead.” In such scenarios, the first casualty is often the truth; good, decent, and apolitical people tend to be caught in between and punished.

So, while you enjoy these well-written novels and the excellent television show, take the lessons and warnings of De Luca to heart.