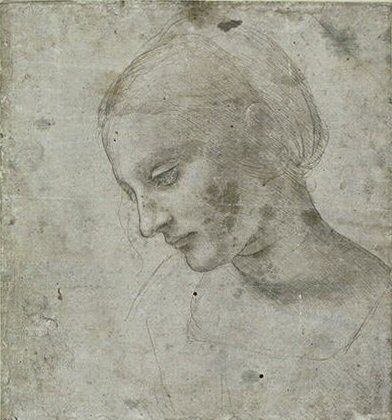 A metalpoint drawing by Leonardo da Vinci believed to have been referenced in the creation of “Madonna Litta.” 7 inches by 6.6 inches. (Public Domain)
Arts & Culture

In a March 6, 2013 lecture titled “Leonardo da Vinci: Singular and Plural,” Luke Syson, curator in charge of the Department of European Sculpture and Decorative Arts at the Met, laid out the evidence that the Leonardo da Vinci we know today as a master painter achieved his reputation by delegating an astonishing amount of work to dedicated and loyal apprentices.

“In his lifetime, he was praised to the skies as a painter-philosopher,” Syson said. “But he was also notoriously slow. The number of paintings agreed to be by his hand are astonishingly small and even fewer were finished.”

Irregularly paid by his patrons, da Vinci taught art to make ends meet. In order to produce enough paintings to stay afloat, he and his senior apprentices had a sort of assembly line way of collaborating.

“What we see is a working method in which designs circulated between master and pupil using a kind of cut and paste technique involving master drawings and cartoons,” Syson said. Compositions and figure studies sketched by the master on paper were copied by tracing in pinpricks. Two or more of da Vinci’s students would then paint different parts of the work, dividing it either by background and foreground, or by figures in a multi-figure composition. In the final stages, da Vinci might have put on the finishing touches by refining the shading.

Syson believes that da Vinci’s workshop was based on Andrea del Verrocchio’s (1435–1488) model of collaboration. In Verrocchio’s works, as in works attributed to da Vinci, at least two painting styles are evident, strongly suggesting that multiple artists worked together at various stages of painting. The individual’s methods of treating shadows and highlights, hair, and drapery, for example, are clearly observable in different figures in the same painting.

This makes the attribution of authorship during this period in Renaissance Italy and the nature of individual work difficult to navigate with any certitude. Only by piecing together sketches from the notebooks of the master and by examining the idiosyncrasies of his students’ hands are scholars forming speculations of who actually created Da Vinci’s work.

“It comes out of Leonardo’s umbrella, it’s based on his sketches, but none of it was actually painted by Leonardo himself… What we’re looking at here is, in a sense, a kind of unauthored and authorless authored piece…” Syson said. “It becomes akin to a miraculous picture—that idea in the Middle Ages and the Renaissance, that a picture is finished by an angel who came down and painted passages. It becomes removed from that very personal relationship between an individual painter and the work itself.”

Like painters before and after him, da Vinci fought with the individual’s role in painting. On the one hand, he understood the skills that the individual must apply to create a scientifically beautiful work; yet he shrunk from the idea of his own ego making its way onto the canvas. Maybe collaboration and delegation were his ways of inviting the aiding angel.

On Wednesday March 16, Syson’s colleague Carmen Bambach, curator of the Department of Drawings and Prints will be turning the paradigm once again with a talk about Leonardo da Vinci in his old age.

Who’s Who in Da Vinci’s Workshop

Among Leonardo’s earlier pupils were:
Gian Giacomo Caprotti da Oreno (1480–1524)
Called “Salai” meaning “The little devil,” he arrived at Leonardo’s workshop as a young thief. In da Vinci’s notebooks he describes multiple accounts of young Gian Giacomo walking off with silver stiles belonging to workshop staff and eating “supper for two and doing mischief for four, as he broke the flagon, spilled the wine…”

Francesco Melzi (1493 – 1570)
A son of a Milanese nobleman, Melzi was a loyal student and friend of da Vinci. When the master passed away without an heir, Melzi inherited his manuscripts and collections which his family sold later on.

Marco d’Oggiono (1470 – 1549)
Little is known about this artist. He is not regarded as a great painter or a great copyist, but has created a copy of “The Last Supper” which now resides in Russia. Landscapes are considered to be his forte.

Giovanni Antonio Boltraffio (1467 – 1516)
Illegitimate child of a noble family, Boltraffio became one of da Vinci’s most accomplished students. He embraced da Vinci’s technique of creating smoky shadings, but tended to use a harder light in his images.

Citations from The Notebooks of Leonardo Da Vinci selected and edited by Irma A Richter.