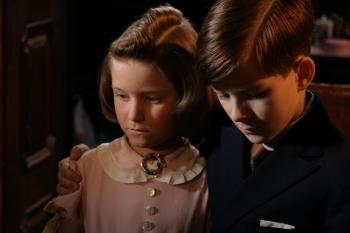 Inside Hana’s Suitcase: A Holocaust Story of Hope

BY Madalina Hubert TIMENovember 12, 2009 PRINT
Hana Brady was one of the 1.5 million Jewish children who were killed in the Holocaust, and like most of those children, her story was likely to end there.

But destiny saw to it that Hana was not to be forgotten, and as with Anne Frank, one of her contemporaries, Hana’s story would survive to teach millions of people not only of the horrors of hatred and intolerance but also of the strength of the human spirit.

From a newspaper article to an award-winning CBC radio documentary, a book translated into 40 languages, a TV special, a play, and even a Japanese comic (manga), Hana’s story has been told through many mediums. And while Hana’s fate was a tragic one, there is something almost magical about the manner in which her story has reached us, the suitcase that transported it, and the people who carried it.

Inside Hana’s Suitcase, director Larry Weinstein’s feature-length docu-drama, is the latest to bring Hana’s story to the public. A remarkable endeavour that manages to seamlessly blend heart and superb filmmaking technique, the film honours the legacy of Hana’s story and the incredible series of events that led to its discovery.

Known for his award-winning films on musical subjects, Weinstein initially hesitated to do a story on a theme as dark as the Holocaust. However, he changed his mind after finding out more about Hana’s story and especially after meeting George Brady, Hana’s brother, and George’s daughter Lara.

“We felt like family instantly,” said Weinstein, who accompanied the two to the film’s special preview in Toronto last week. The film was an audience favourite when it premiered at the Hot Docs International Film festival in Toronto last April.

The story behind Inside Hana’s Suitcase began in 2000 in Japan when Fumiko Ishioka, Executive Director of the Tokyo Holocaust Education Resource Center, received a package from the Auschwitz Museum containing items that belonged to children who were at the concentration camp.

Among them was a brown suitcase with a name, date of birth, and the inscription “Waisenkind” (orphan) painted on it. Fascinated by the suitcase, Fumiko embarked on a quest to find its owner—a quest that led to the discovery of Hana’s drawings, records of her imprisonment, and finally of her brother George who had survived the war and was living in Toronto.

Little did George, 72 at the time, expect to receive a letter from Japan that contained his sister’s drawings and a photo of the suitcase he thought was long gone. This set George, Lara, and Fumiko on an unexpected journey of unlikely encounters and incredible opportunities to share his story and that of his sister with millions of people around the world.

“There is an incredible sense of responsibility that comes with [the story],” said Lara, who shares Hana’s middle name. With the Holocaust survivor population dwindling, George and Lara have made it their mission to educate children using the true story of a little girl killed by hatred to teach tolerance and empathy.

By having Hana’s story narrated by schoolchildren in Canada, Japan, and the Czech Republic, Weinstein emphasizes the power of awareness. The documentary, like the story, is global and intertwines past and present, old and young, to emphasize interrelatedness. What is the difference between Hana’s life and that of the children narrating her story today? The children realize there isn’t much.

Through its numerous adaptations, Hana’s story has touched children all around the world. Many children—and even entire classrooms—have sent letters and pictures to the Tokyo Holocaust Education Resource Center telling how they were inspired by Hana’s story.

A class in Canada that composed a song dedicated to Hana emphasizes the effect the story has had on their lives. “I read a story about a young girl, a true story that changed my world… I’ll have the courage to let her dreams grow—to share her story, and we’ve just begun to tell each and everyone.”

The song can be found on George and Lara’s family website, along with many other precious mementos of Hana’s life.

“Hana’s suitcase is now filled with the love and thoughts of thousands of children. It may appear empty, but it is once again, miraculously, packed—with life and joy,” says a message on the website. (http://www.hanassuitcase.ca/ )

Inside Hana’s Suitcase opened in select theatres in Toronto on Nov. 6, with scheduled openings in Vancouver on Nov. 13 and Montreal on Nov. 20.