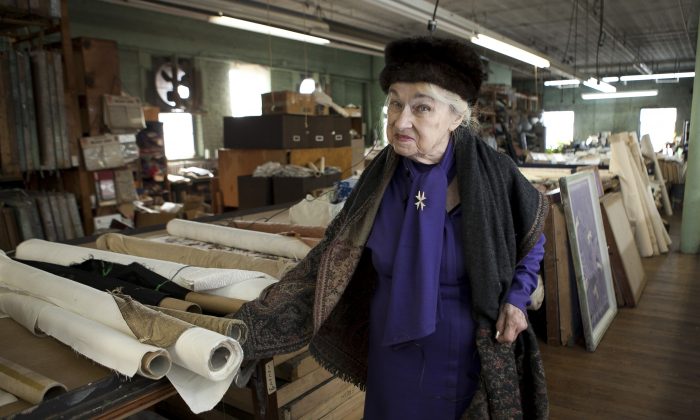 MT. VERNON, N.Y.—A short walk from the train station, on the second floor above an auto repair shop, is a quiet, dusty studio bathed in the smell of turpentine. Sleepy sunlight falls on an assorted array of items that have settled there from close to two decades of creative work.

Drafting tables and countertops are obscured by piles of invoices, postcards, hand-written notes, and printed emails. On three 20-plus-yard-long tables lie samples of hand-screened wall coverings of cotton, silk, and paper. Compared to commercial makers of wall-coverings who use 50-yard-long tables, Zina Studios is small and homey.

Silkscreens—over 1,200 of them with names like “Lumieres,” “Oak Leaf Trellis,” and “Dotted Shells” marked on their wooden frames—fill shelves all the way up to the ceiling. A niche by a sunny window houses pails of paint and oversized brushes. A wall-mounted telephone, hand-held radio, and antique Russian typewriter constitute the analog patriarchy of the place.

The produce of Zina Studio’s charmingly messy workshop go up on museum walls and the homes of Vanderbilts, Rockefellers, Kochs, and Fords via legendary interior designers like Elizabeth Draper, Sister Parish, and Albert Hadley.

On a typical December Saturday, only two souls would be found here—Countess Tatiana Bobrinskoy and Sean Stoll, who joined the workshop during his freshman year of college. Hair graying now, Stoll has a day job in nuclear physics and medical imaging, but still comes here every Saturday to print wallpaper.

Though 16th and 17th century patterns are the main staples at Zina Studios, clients—whether they be homeowners, museums, or interior designers—are also able to submit their own designs. Some are classic, others minimalist. A postcard a client mailed in featuring the bricks of an old English abbey was the basis for one design.

Lady at the Helm

Countess Bobrinskoy is the design firm’s hub and client liaison. She’s decisive, cheeky, and though she’s in her 90s, she can still spot at a glance the subtle difference between robin’s egg blue and Tiffany blue. Through decades developing an eye for the nuances of fabric, paint, and finishes, the countess easily anticipates how particular shades will come out on varying supports depending on their texture and color.

Countess Bobrinskoy was born in 1923 in Germany. At two months old, her family emigrated to France, where people were becoming increasingly wary of the young Nazi party’s rise.

“My father persuaded the judge that I really couldn’t be too much of a Nazi at two months,” she said, laughing. “That’s the way the bureaucracy goes.”

When she was in her early teens, the family came to the United States when her father, Nicholas S. Timasheff, accepted an invitation to teach sociology of law at Harvard. Timasheff’s own father was Minister of Trade and Industry for the imperial regime.

A descendant of old Russian nobility, Tatiana became a countess when she later married Nicolai Alexeevich Bobrinskoy, the great, great, great grandson of Catherine the Great. The two married in New York and had two children.

Nicolai, a painter, was born in France.

“After WWII he was brought back to Paris, and they had nothing to eat,” the countess said. “He had an aunt who had a very fancy shop in New York, and she asked him to paint on scarves. So this is how he transitioned from [fine art]. Then he was invited into a factory to do design, and he didn’t like it very much because it’s very hard to just follow [a] pattern all the time. Happily, we knew this lady who had a studio—[she] was getting older and needed a younger partner; he joined, and delivered many, many designs.”

The countess too, worked to support their family. She taught Russian literature at Marymount Manhattan College and co-authored books on the subject.

The count passed away in 2006, and since then, Countess Bobrinskoy has carried on her husband’s legacy.

Through this business, the Bobrinskoys have found their way back into mansions, even if they belong to others.

The Magic of the Hand

Most wall-coverings these days are digitally mass-produced created on a conveyer belt. That’s what you find at the hardware store. Then there’s designer wallpaper, which, though fashion-forward, is produced in much the same way. In a class all their own are hand-painted and hand-screened wallpaper.

Zina Studios belongs to this last category. During our visit, Stoll was putting some elbow grease into a mixture of pale paint. All the colors are hand mixed on the premise in batches large enough for an entire job. A long stretch of cotton fabric was rolled out, awaiting the application of some dragonflies.

To begin the process, the design is transferred from a sketch or a preexisting design onto film. A strong light is shone through the film onto a silkscreen covered in photo-reactive emulsion. Areas exposed to light harden, forming a stencil.

Then paint is poured onto the screen. Using a large squeegee, it is forced through the unblocked weave of the silk and onto the fabric or paper.

It is crucial to make sure the pattern repeats properly between each placement of the screen. For designs with multiple overlapping colors, the accuracy of the placement is even more vital.

But there are no laser-directed mechanical arms here—the alignment is accomplished using an astonishingly simple system. Metal rails line either side of each table. Wooden blocks are screwed onto them at regular intervals to help Stoll place the screen.

After so many years, Stoll moves around the narrow aisles assuredly, but is loath to make a misstep. A look of studied concentration accompanies him as he works, almost as if he were on a tightrope and our questions and cameras could cause a costly accident. Indeed, if he had smudged the paint on the last yard of a client’s order, he’d have to start all over again, color by color, screen by screen.

I ask him what keeps him in this business. He seems to falter for a moment as he ponders, and presses down on the squeegee.

“It’s a small business, so it’s like a family here,” Stoll said when he finally replied. “We all have our roles.”

Though the studio relies on the work of a few designers, most of the time, Stoll said, it’s just him and the countess.

“Mrs. B,” as Stoll calls her, splits her time between Zina Studios and volunteering with the Knights of Malta, Sovereign Order of St. John.

The cross pin she wears on her scarf represents the Knights, of whose U.S. branch her late husband was elected Grand Prior. Today Countess Bobrinskoy carries the title of Grand Chancellor.

The Order coordinates relief efforts to people in need—from victims of Hurricane Fifi in Honduras in 1974 to, most recently, children in Syria suffering from polio.

“Having seen what we have seen, it is impossible not to do this. And that’s why I’m so busy. I’m busy 26 hours a day, 8 days a week. I have no time to get older, although my bones do talk to me sometimes,” she said, and smiled.