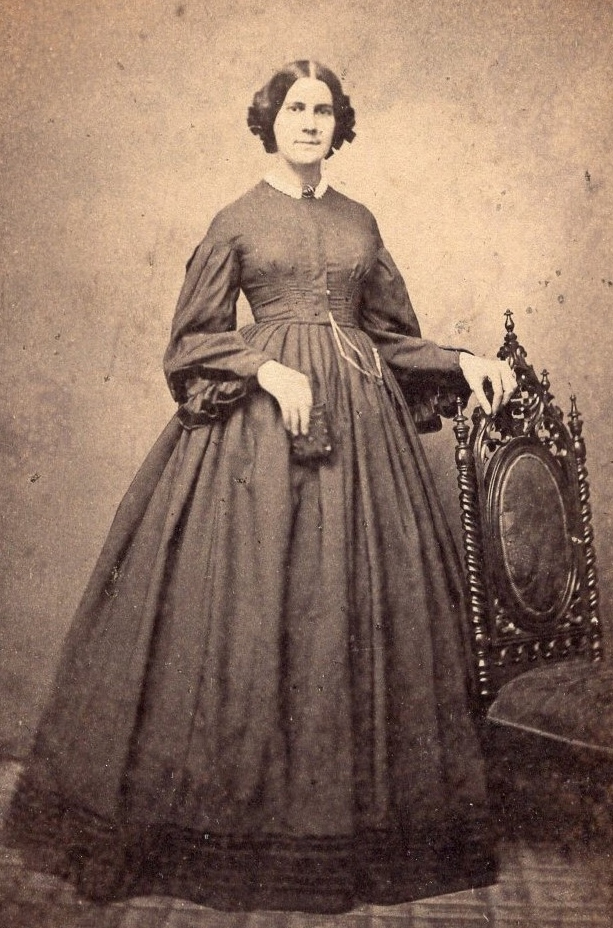 Captain Augustus Vignos was wounded on the first day of the Battle of Gettysburg, the bloodiest battle of the Civil War, and he spent the next 40 years trying to find the woman who nursed him back to health
BY Ron Kirkwood TIMEApril 30, 2022 PRINT

Captain Augustus Vignos of the 107th Ohio Infantry was so determined to find and thank the nurse who cared for him at the XI Corps Union hospital after the Battle of Gettysburg that he carried a photo of Rebecca Lane Pennypacker Price for 40 years.

Vignos was wounded in the right arm on July 1, 1863, during the bloodiest battle of the Civil War. Gangrene developed; his arm was amputated above the elbow at George and Elizabeth Spangler’s farm, and his condition deteriorated.

But Mrs. Price tended him each day at the Spangler hospital and fought for his life. She read to him, fed him, wrote letters home for him, changed bandages, and administered medicine. She helped keep him alive. And then she found clean clothes for him when he improved to the point where he could take a train home to Canton, Ohio.

Vignos went on to marry in 1866, have nine children, and amass substantial wealth as a businessman. He was a pallbearer at the funeral of close friend President William McKinley. And all of that family joy, countless friendships, and business success happened thanks in part to the resolute care from Mrs. Price at the XI Corps hospital.

Vignos showed Mrs. Price’s photo to fellow ex-soldiers at national gatherings, but for more than four decades he couldn’t find her. Then, unexpectedly, he received a letter in 1906: “Dear Sir: Do you remember the tall nurse at Gettysburg who furnished you with clothing so that you could go home?” Mrs. Price had found him. “I was led to wonder if you were living, and if you were going to attend the G.A.R. encampment at Saratoga. I expect to be there, and would be glad to meet some of my ‘soldier boys.’ I would be glad to hear from you. … Now, in my declining years, my thoughts so often dwell upon those stormy times, and it gives me great pleasure to hear from or see those for whom I cared. Hoping you are enjoying health and prosperity.”

Vignos replied that he looked forward to seeing her “with great pleasure,” and their Spangler reunion took place on September 12, 1906, at the 41st Grand Army of the Republic Encampment at Saratoga Springs, New York, 43 years after they met at the Spanglers’ farm.

Mrs. Price was among several thousand women who served in Union and Confederate hospitals, most of whom were paid for working at relatively clean and modern brick-and-mortar hospitals in major cities. But some, like Mrs. Price, worked for no pay in field hospitals immediately during and after battles—in barns like the Spanglers’, amid the agonizing sounds of dying men crying for their mothers and wives and the smell of blood, other body fluids, and human feces. They read Scriptures to the men, held the hands of dying soldiers, and talked to them in a desperate attempt to get their minds off their agony and their situation.

Mrs. Price sang “Rock of Ages” to an Ohio soldier as he died at Spangler. She held an umbrella over a New York soldier to protect him from the July sun as he was carried on a stretcher to the barn for a leg amputation. This soldier would die two days later, and Mrs. Price said his last words were “Mother, Home, Heaven!”

“Why even now, after more than a quarter of a Century has passed, it makes me heart-sick to think of it,” she wrote to her children years later.

Rebecca came from the prominent Pennypacker family of eastern Pennsylvania. First cousin Galusha Pennypacker was a Civil War brigadier general by the time he was 20 years old and was awarded a Medal of Honor for his bravery at the Second Battle of Fort Fisher, North Carolina, in January 1865. She was second cousin to Samuel Whitaker Pennypacker, governor of Pennsylvania from 1903 to 1907, and her mother, Elizabeth, ran a Union Army hospital in Chambersburg, Pennsylvania.

Rebecca lived in Phoenixville, outside of Philadelphia, and helped form the Ladies Union Relief Society, which grew to more than 100 women and collected so much food and supplies that her husband, Edwin, provided space in his downtown store for storage and gatherings. Rebecca rode on a rough bench in a darkened railroad cattle car at night from Baltimore to deliver a ton of supplies to Gettysburg, then went right to work at the XI Corps hospital just south of town.

Rebecca was 25 years old, strong, and full of energy and ideals when she arrived in Gettysburg a few days after the battle in July 1863. She had short, dark hair. Her slight smile and eyes revealed the compassion inside her but hid the toughness and strength required to deal with the horrific scenes at Civil War field hospitals.

“The stench was sickening,” she said of Gettysburg. “The dead were not all off the field and then so many wounded! Can you possibly form an idea of what it would be in hot July weather? … Methought as I lay awake longing for a breath of fresh air, how little we, in our comfortable, cheerful homes knew of the suffering caused by the war.”

She gave her pillow upon her arrival at the Spangler farm to a soldier who didn’t have one, then rested her head on a coat after that. “Oh, what comfort,” the soldier said.

“On the barn floor side by side, with only space enough to step between them, lay the worst cases,” she said.

“The Surgeon in charge asked me to take them under my special care. It was an unpleasant duty. One from which, for a moment I instinctively shrank! Just outside the barn was the amputating table, and I thought, how can I pass it? Strength was given me, so for many days and nights I passed and repassed it, often when operations were being performed. …’

“… Oh! The sad scenes would fill a volume. … So many times at night I lay on my stretcher weeping instead of sleeping. Frequently at night I would hear someone scratching on the tent, and when asked what was wanted, the response would be, “Sister, Mr. — is dying, and wants you,” so I would go to talk, read and sing to them, and perhaps … close their eyes in death! … I was going from morning until night, all the time feeling that I could not do enough, often sitting up until nearly morning, writing letters from notes taken from the boys during the day. …’

“… The dear sufferers needed all the comfort that could be given them; those were trying days to them. The intense heat, the stench from wounds, the annoyance from flies! … What they suffered can never be told, and it was borne so uncomplainingly.”

Mrs. Price had a strong sense of right and wrong in addition to her compassion. She got a chaplain kicked off the farm when she discovered he was hoarding supplies. She suspected a female visitor who lingered with Confederate wounded of being a spy, so she reported her, and this visitor also was kicked off the farm. Mrs. Price said the Confederate wounded received equal treatment, though she admitted giving them the smallest oranges and apples.

The XI Corps had one of the biggest hospitals after the Battle of Gettysburg, with about 1,900 men from both armies treated there. Mrs. Price worked almost a month at Spangler until the hospital was closed and the men dispersed to Camp Letterman in Gettysburg and more permanent hospitals in bigger cities.

Mrs. Price had a family of four after the war, and she spent the rest of her life doing charitable work. She was a member of and for a time president of the National Association of Army Nurses of the Civil War. Her husband Edwin died in 1914 at age 82 after 55 years of marriage, and she died in 1919 at age 81. Mrs. Price received a $12-a-month Civil War nurse’s pension from the U.S. government from 1893 until her death.

Captain Vignos lived to age 87 despite his arm amputation at Spangler. Vignos’ gratitude for what Mrs. Price did for him at the XI Corps hospital in Gettysburg was common for Civil War soldiers. Civil War nurse Mary A. Gardner Holland said: “How the eyes of the old veteran fill with tears when, at our camp fires, some old lady is introduced, and the presiding officer says, ‘Boys, she was an army nurse.’ For a moment the distinguished officers present are forgotten, and they gather around the dear old lady, eager to grasp her hand and say some kind and loving word in appreciation of her services.”

Nursing would become a common profession for women for the first time in the years following the Civil War, thanks to Rebecca Lane Pennypacker Price and the thousands like her.