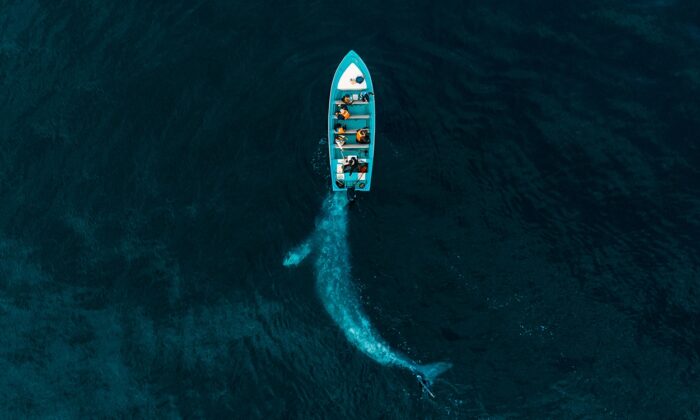 ‘IndividuWhale’ Introduces Users to ‘Solé,’ ‘Scarlett,’ and Other Gray Whales Along the Oregon Coast

Oregon State University marine ecologist Leigh Torres has studied gray whales along the Oregon coast for more than six years. That naturally raises a question: Does she have a favorite?

“I like that one whale, Solé,” Torres told The Epoch Times. “She has a really distinct place she likes to be and foraging style.”

Solé, a female first identified in 1999, has been spotted 70 times since 2015, all within a very limited section of the ocean.

“She must like the prey on the menu here and be very good at catching it,” states IndividuWhale, a website that Torres and her scientific collaborators created to showcase the gray whales that they track.

The website profiles Solé alongside a handful of other whales in the Pacific Coast Feeding Group (PCFG), a subpopulation of roughly 250 gray whales that spend their summers in the waters off the Pacific Northwest, rather than the Arctic or Russia’s Sakhalin Island.

Torres told The Epoch Times that her team’s website was inspired by the unique personalities and experiences of the whales that they’ve encountered.

“We see these whales over and over again,” she said. “They’ve kind of become like friends to us. We thought that sharing these stories with the Oregon community and the whole world would be pretty fun—that other people would want to know that these whales have interesting and cool lives.”

While IndividuWhale highlights just a few PCFG gray whales, Torres says she can identify 30 to 40 whales by sight.

“When you’re in the field with them and you’re on a boat, the whale only surfaces for a second, so you only get a second to see those markings,” she said. “You have to train yourself to really quickly hone in on a few distinctive markings, and then you’ve got to go through your memory bank and be like, ‘OK, where have I seen that whale before?’”

Gray whales are baleen whales, vacuuming up shrimp and other tiny organisms from the shallow coastal seafloor. The PCFG whales migrate thousands of miles each year to their winter breeding grounds in Baja California.

Torres and her colleagues use a range of methods to study the subpopulation.

Aerial drones allow them to capture overhead images of whales. By applying a formula to a whale’s physical dimensions in those images, the scientists can assess its body condition at a given point in time.

They also scoop up whale feces, which the IndividuWhale website describes as “a goldmine” of information on everything from a whale’s genes to its hormonal profile. Gray whale feces contains cortisol, a stress hormone. By correlating levels of cortisol with potential stressors, such as the noise from human vessels, Torres and her team can assess whether and to what extent those factors are affecting the animals.

“We have hydrophones down in the study area that record different noise levels and different sources. And then we look at those noises relative to their stress levels,” she said. “But as we know, we get stressed out for all sorts of reasons. So we’re also trying to control for those other things that can stress an animal out—whether it has an injury or whether it’s really hungry and skinny, or whether it’s pregnant, and so forth. That’s part of why we’re collecting all that other demographic and life history information—so that when we do that comparison between different noise levels and their stress hormones, we can account for those other factors that might also be stressing the whale out.”

Torres is also interested in “whale culture”—distinctive patterns of behavior among groups of gray whales that seem to be learned, rather than transmitted through genes or another more mechanistic route. She cited the example of the PCFG itself. Those in the PCGF migrate to Oregon rather than going to the Alaskan Arctic like most other gray whales.

“That is a culture, that they develop different ways of feeding and different habitat use patterns,” she said.

This past summer, her team watched as an important lesson was apparently imparted to one young whale, Pacman (the calf of Scarlett, or “Scarback,” one of the animals featured on IndividuWhale).

An older whale used a distinctive feeding technique—the “bubble blast”—at a particular spot. Moments later, Pacman swam over to the same location and issued a bubble blast of his own.

“I don’t know for sure, but it sure looked like the whale was learning and trying to replicate what this older whale was doing,” Torres said.

IndividuWhale emphasizes that gray whales still face threats, including entanglement in fishing gear, increased ocean noise, and declines in the kelp forests where their prey live. In recent years, the gray whale population along the West Coast has declined by roughly 25 percent, according to research from NOAA Fisheries.

Yet there’s also reason for optimism. While gray whales were nearly hunted to extinction by the 1950s, they subsequently recovered after federal protections were put in place. In 1994, the eastern North Pacific gray whale became the first marine mammal taken off the Endangered Species Act’s list.

“They have rebounded well from whaling better than many other populations,” Torres said. “It’s one of the great success stories of the Endangered Species Act.”

She said scientists are still uncertain as to why gray whale populations have occasionally cratered in the past few years.

“It’s probably down to low prey availability for them and changing habitats and ecosystems,” Torres said. “They’re a really good sentinel species about how our oceans are doing, but they’re also resilient.”