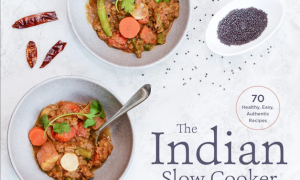 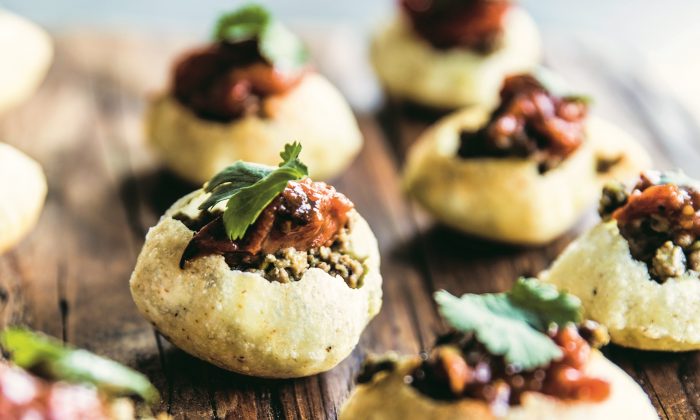 In the Indian culinary repertoire, there’s a category of food known as chaat, made up of delicious little snackable dishes. In Houston, we have a store dedicated to chaat called Masala Munchies. it’s owned by the Patel family, who also own the restaurant London Sizzler next door.

It seems like almost everything in their store has a crunch factor, as though the word chaat were onomatopoeia for the sound created by eating these snacks. I particularly love pani puri, fried wheat balls that are hollow in the center. By cracking the tops, they form small cups that you can fill with anything you want.

One year I was asked to come up with a taco for a food festival, and immediately I thought of the crunchy tacos that so many of us grew up eating on “taco night” and still crave to this day. Then I thought of pani puri as a stand-in for the fried tortilla shell. I used an Indian-spiced ground lamb filling and topped it with tomato chutney (a salsa by another name) and cucumber raita. The result? this Indian “taco” was the fan favorite at the festival. I call it a “puffy” taco in reference to the shape of the pani puri, which looks like a puffed-up golf ball. In Texas, though, there’s a third reference embedded in this name: the chewy fried-tortilla tacos that are a signature dish of San Antonio. That may seem like a lot of cultural references to package together, but that’s just how my brain works.

Serves 8 as an appetizer

For the tomato chutney:

Make the chutney: Film a large skillet with vegetable oil and heat over high heat. When the pan is very hot, add the tomatoes and cook, shaking the pan occasionally, until the tomatoes are blistered all over, 3–4 minutes.

Add the garlic, cinnamon stick, and star anise and continue to cook until fragrant, a few seconds. Add the cumin and toast for a few seconds more. Add 1 cup water and reduce the heat to medium-high. Add the cayenne and chile powder. Season with salt and pepper and bring to a simmer. As the tomatoes start to soften and pop, begin pressing lightly on them with the back of your spoon or spatula to smash them. Stir in the sugar and vinegar. Simmer to reduce until thick, about 8 minutes. Remove the cinnamon stick and star anise (or leave them in for a cool surprise for your friends). The chutney can be made up to 1 week in advance; store in a covered container in the refrigerator until ready to serve.

Make the raita: In a medium bowl, toss together the cucumber, onion, scallion, cilantro, mint, yogurt, lime, and masala. Season with salt and pepper to taste, cover, and refrigerate until ready to use. (The raita can be made a day in advance; stir it before using in case the yogurt has separated.)

Make the taco filling: In a large skillet, heat the olive oil over medium-high heat. When it’s hot, add the onion, masala, star anise, and cinnamon stick. Cook, stirring, until just toasted and very fragrant, about 30 seconds. Add the ground lamb and cook, stirring and breaking up the meat with the back of your spoon, until no pink remains, about 5 minutes. Add 1 cup water. Simmer for 5 minutes, then reduce the heat to medium-low and cook for 1 more minute. Season with the salt, pepper, and lime juice. Cook until the liquid is nearly all evaporated, 5 minutes more.

Place the pani puri on a platter and tap the tops with a spoon to crack them open, so that they are like little cups. Spoon a small dollop of raita in each, followed by a spoonful of lamb filling, and top with a small spoonful of tomato chutney. Serve immediately, garnished with cilantro leaves.

Note: Pani puri typically comes in two forms: already “puffed” and ready to go, or dried. The latter look like flat, brown medallions, and need to be fried before they can be eaten. For ease, I usually purchase the already-puffed version to avoid the step of setting up a fryer.

Combine all the ingredients in a food processor and process until smooth. The masala will keep in an airtight container in the refrigerator for up to 5 days.

Recipes reprinted with permission from “Cook Like a Local: Flavors That Can Change How You Cook and See the World,” by Chris Shepherd and Kaitlyn Goalen. Published by Clarkson Potter.