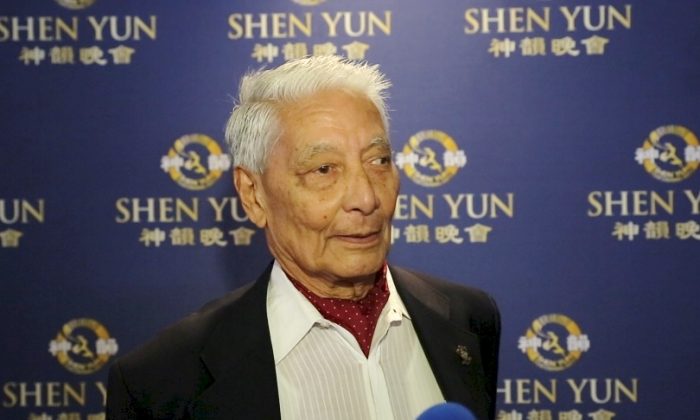 COSTA MESA, Calif.—Hugh Marmay was an Indian Army colonel, serving for 25 years. He’s been in the United States for more than 30 years, now retired, but he worked for years as a civil engineer consultant.

On Sunday, he said he watched the most impressive performing arts show he’d ever seen in his life.

Mr. Marmay was in the audience of Shen Yun Performing Arts World Company at the Segerstrom Center for the Arts on Feb. 1.

Dropping words such as “superb,” “brilliant,” “compassionate,” and “philosophical,” Mr. Marmay said the movements of Shen Yun’s dancers were “absolutely out of this world.”

According to the New York-based company’s website, China’s traditional culture spans 5,000 years, and it was known as the “Divine Land.” This included a belief that the divine transmitted this rich culture to the people of the earth.

Yet communist rule has nearly destroyed this culture and traditional Chinese values, such as the idea of harmony between heaven and earth. Through breathtaking music and dance, Shen Yun aims to revive these traditions and share them with the world.

Mr. Marmay adored the intricate handmade costumes of the dancers, which changed for each dance number.

“What I like about them, they evoke everything and without any unnecessary showing of flesh. They’re all nice and modest. And yet evocative.”

The performance also includes several musical soloists, including soprano singers, whose Chinese lyrics were projected in English onto the backdrop. Mr. Marmay felt a message of truth coming through these lyrics.

“It covered all the truths,” he said. “It goes back to the essence of one’s truths. What one believes in, and what one wants to believe, and very spiritual. That’s what I like about it.”

When asked what he would say to those who haven’t seen Shen Yun, he said, “For goodness’ sake, see it.”

‘Blessed to be here’

Audience member and retired restaurant business owner Catherine Pattison said she had been looking forward to seeing Shen Yun. “I’m just feeling so excited, so blessed to be here.”

Ms. Pattison raved about the enchanting music, the vibrant special effects, including an interactive animated backdrop, the elegant costumes, and the remarkable skill of the dancers.

“I’m loving every moment of it,” she said.

She was especially touched by the traditional values of compassion, understanding, and caring for one another, brought forth through the stories behind each song and dance.

Shen Yun’s website says the influence of Confucianism, Buddhism, and Taoism on China generated a rich and profound system of values, including the five core virtues of benevolence, righteousness, propriety, wisdom, and faithfulness. “Shen Yun seeks to revive these virtues the world over,” says the website.

“There just can’t be enough good in the world,” said Ms. Pattison. “There’s so much terror going on, horrible things, that it’s especially beautiful, to come to a place of beauty where people from all walks of life are loving it and enjoying it.”

She hoped her son and daughter could come next time and share the unique experience of Shen Yun.